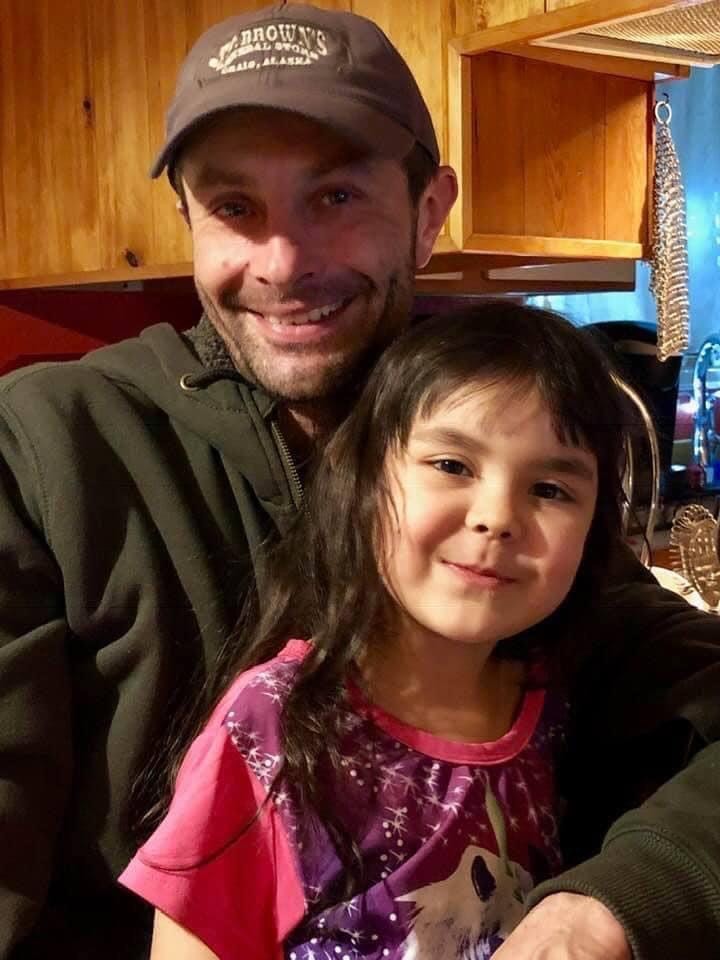 The two people that perished last month in a Ketchikan house fire have been identified by the blaze’s lone survivor. A memorial service is planned for the two victims later this week.

Jeanine Burbary credits her husband, Nick Burbary, with getting her out of the blaze alive.

“I would like people to know that he saved my life. And he died trying to save my daughter’s life,” she said in an interview Wednesday.

She said she woke to smoke alarms blaring on the morning of Dec. 30. She rushed upstairs to the kitchen to find her husband laying on the floor near the stove. Flames were rising from the glass cooktop.

“He suffered from a seizure disorder. So I don’t know if maybe he had a seizure, and who knows how long he was laying there,” she told KRBD.

She said she grabbed a fire extinguisher, but couldn’t pull the pin. She yelled at Nick, 41, to wake up, she said.

But she could hear her 8-year-old daughter, Madalyn “Maddie” Carraway, upstairs on the third floor.

And she did. She said windows shattered as she opened the door. She ran across the street and pounded on a neighbor’s door, asking them to call 911.

Meanwhile, Nick headed upstairs to try to save Maddie.

They never made it out alive. The flames, heat and smoke were too intense to allow firefighters inside, Ketchikan’s fire department said in a statement shortly after the blaze.

“I keep telling people that he didn’t earn his angel wings — he earned golden wings,” she said.

Burbary said Nick and Maddie were close — she joked that Maddie was “Nick’s little shadow.” She said her daughter decided on her own to call her stepfather “Dad.”

She said they loved to play with each other.

“They were always goofing off, like brother and sister, almost. I would get mad at them in the grocery store, and he’s like, ‘OK, we gotta chill out, Mom’s getting mad,’” she recalled.

The family also loved to hike together at Settlers Cove State Park and Carlanna Lake.

She said Nick was a commercial fisherman on the Haida Chief and the Resurrection. He also dove for geoduck clams and sea cucumbers. She said she and Nick were a perfect match for one another.

She said the family loved to fish for halibut, salmon and crab — Nick took her fishing off the downtown Stedman Street bridge for her first time last summer. The two married last July in front of “The Rock,” an iconic statue on Ketchikan’s cruise ship docks.

Burbary said Maddie was a beautiful, bubbly, bright third-grader at Tongass School of Arts and Sciences. She called Maddie her “miracle baby” — she said doctors gave her only a 25% chance of being born. She said Maddie performed with Ketchikan Theatre Ballet.

“She just loved to dance and sing and she was always so happy. Like, you never saw her have a bad moment,” she said.

‘This community has just been amazing’

Burbary said she’s grateful to the firefighters, medics and police that responded to the fire. And she thanks the Red Cross for providing financial support in the immediate aftermath. She’s staying with a friend for the time being.

She said she’s still working with her insurance company to assess what was lost in the blaze. An online fundraiser has raised more than $23,000.

“This community has just been amazing. Just when I think Ketchikan can’t get any better, they stand up and show you that they can,” she said.

A memorial service is scheduled for 6:30 p.m. Friday at Lighthouse Church of God. It’ll be open to the public. She says anyone who can’t make it can contact her on Facebook for a link to a live stream of the service.