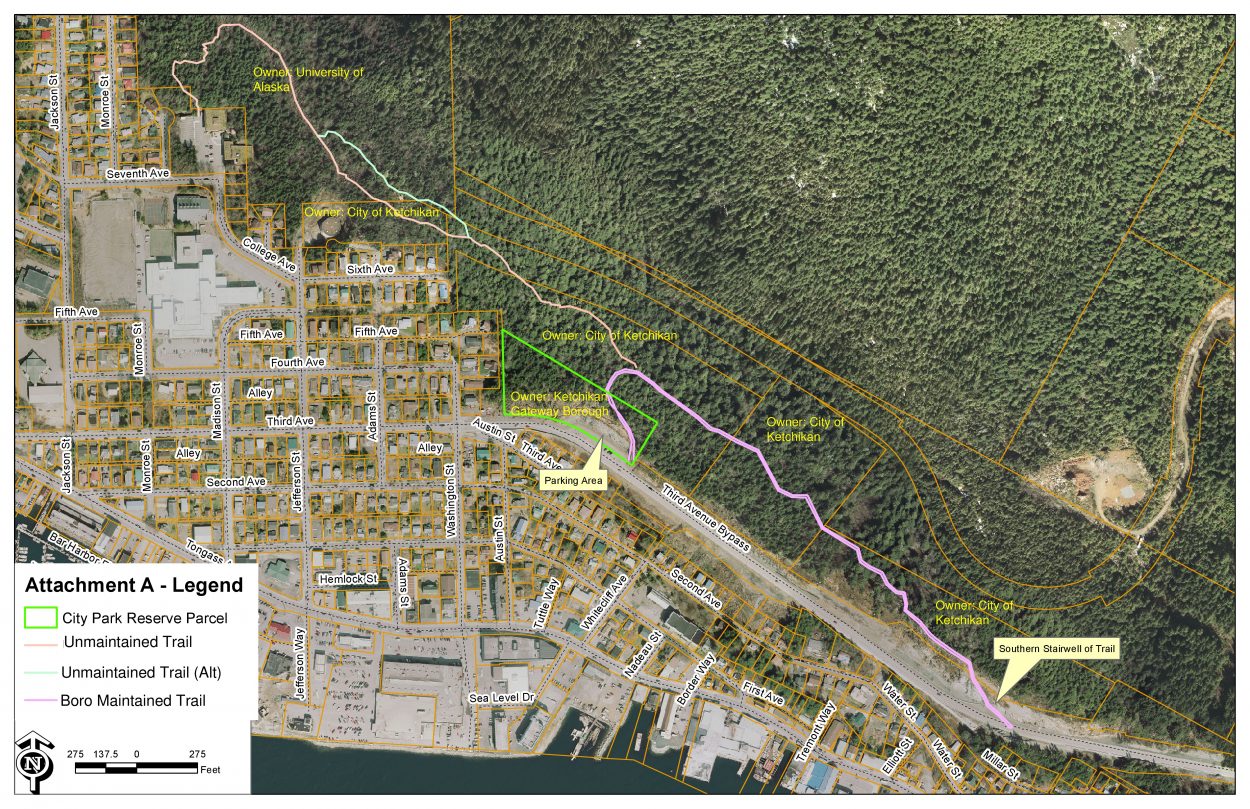 Map of Rainbird Trail (courtesy of the Ketchikan Gateway Borough).

The Ketchikan Gateway Borough has taken the first steps in assuming responsibility for a recreational trail that’s popular with residents and cruise ship passengers. The 1.3 mile Rainbird Trail extends from the University of Alaska Southeast Ketchikan Campus to the middle of the Third Avenue Bypass. But the borough’s section, approximately half, remains closed after being damaged last fall in a landslide.

Two questions were posed to Ketchikan’s borough assembly – whether to pursue taking over responsibility of the portion of the trail on University of Alaska Southeast land, and whether it should be maintained at the current level or developed as a safer, more accessible trail.

UAS approached the borough in November about taking over responsibilities for the portions on university lands citing inability to regularly maintain it. A separate, 2/3-mile section meanders through city-owned land. And public access easements would be required to take ownership.

Borough Manager Ruben Duran says it will likely take time to negotiate with the state, and UAS hasn’t decided how it may wish to proceed.

“So before we start entering into using resources with our attorney and staff, we want to make sure at least there is a desire for us to pursue this project.”

It was noted that negotiations with the City of Ketchikan likely could occur more quickly.

Most of the funding is proposed to come from grants and head tax paid by cruise passengers. Assembly member Judith McQuerry said on Monday that she feels the project is worthwhile and proposed that it move forward.

“So if we don’t pursue the management, then we aren’t going to be eligible for any grants. And it says very clearly in the motion that the level of service, and that means money, will have to be deemed appropriate by the assembly. Which means it’s going to come back (to us).

The assembly voted 6-1 in favor of staff pursuing management and operation of the Rainbird Trail.

Assembly member David Landis was the lone vote against. He said he wanted to see the source of funding more locked down.

“…so we don’t end up either at a dead end or putting money into something in the amount that we didn’t anticipate doing. I don’t feel like it’s a project that is really ripe and ready to go at this point.”

The borough assembly was to consider a motion opposing a lawsuit filed by Southeast Alaska tribes and conservation groups late last year seeking to reinstate the Roadless Rule in the Tongass National Forest.  But the assembly postponed consideration of joining the lawsuit until its February 16 meeting.