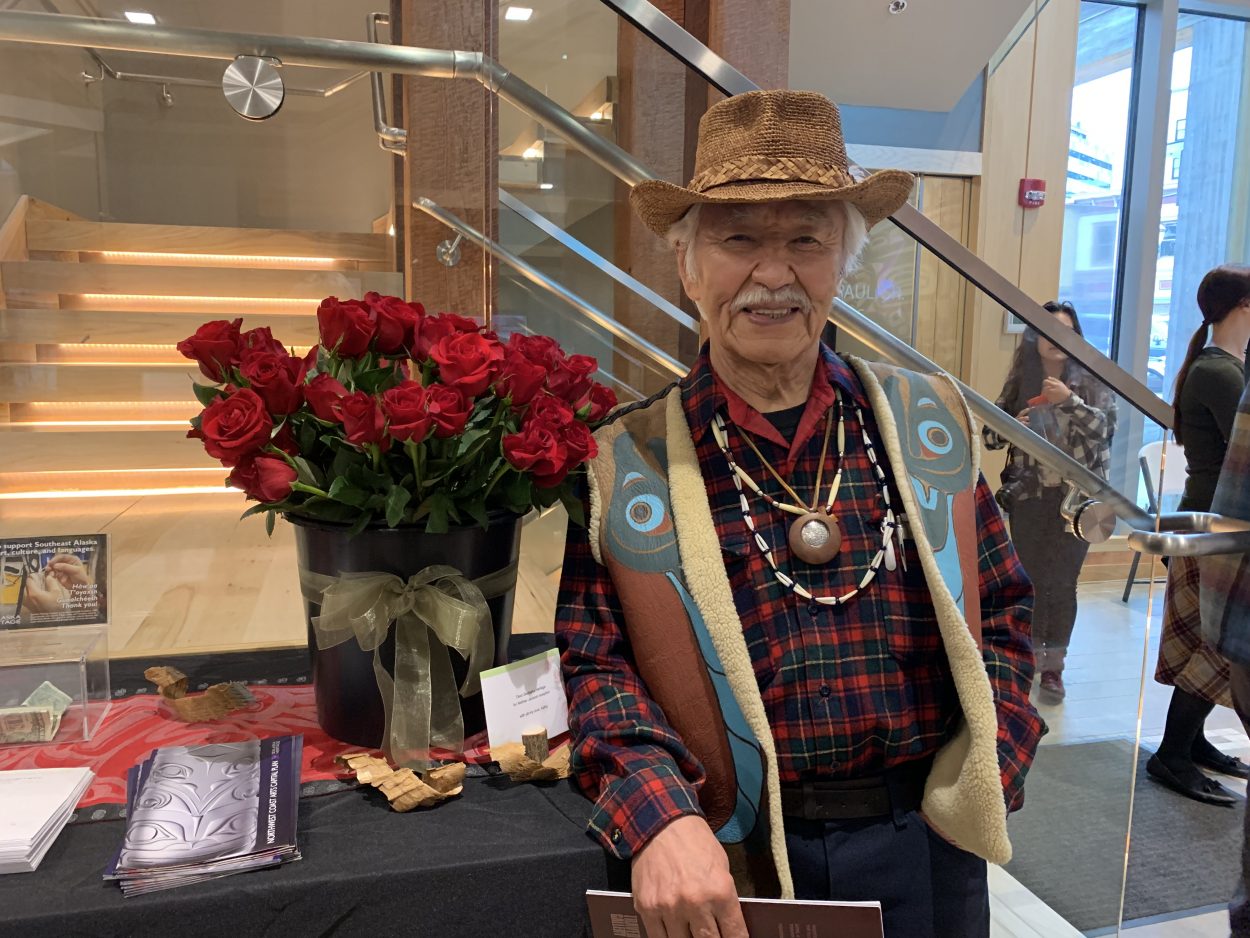 Nathan Jackson in 2019 at a retrospective of his work organized by Sealaska Heritage Institute in Juneau (photo courtesy of Dorica Jackson).

A Tlingit master carver living in Ketchikan has been named a United States Artists fellow.  Nathan Jackson is one of 60 artists to receive the honor in 2021.

Nathan Jackson was born in Tenakee Springs and, after serving in the military, moved to Haines in 1959 to fish commercially. While there, he was challenged by a friend to whittle small totem poles with a pocket knife, copying his friend’s designs. Jackson says an illness ended his plans to become a fisherman.  He spent 54 days in Mt. Edgecumbe hospital in Sitka for what doctors believed was tuberculosis. It was pneumonia. But the former paratrooper filled those days in a hospital bed carving totems.

With the money he earned, Jackson bought a paint set and took up that craft, primarily doing portraits.  He was a member of the Chilkat dance group in Haines, and one of the group’s tours took him to Santa Fe, New Mexico. While there, Jackson showed his paintings to the director of the Institute of American Indian Arts.

“And so when I showed them the picture that I did, they immediately accepted me into that school. So I ended up going to an art school for two-and-a half years.”

These are just the beginnings of Jackson’s long and varied career. He is primarily known for carving totem poles, masks and wood panels, but also draws, paints and makes jewelry. His work can be seen throughout Southeast, but also in the National Museum of the American Indian and the Field Museum in Chicago among other museums nationally and internationally.

Jackson didn’t seem surprised to be named a 2021 USA fellow.

“We applied last year and Delores Churchill ended up getting the award,” he said.

“And then I figured, well, okay, my time’s coming, but I’m younger than she is. She’s well deserving because she had influenced many other people in the art form in working closely with the (Totem) Heritage Center,” he said.

United States Artists is a Chicago-based organization supporting artists and their role in society. Fellowships are $50,000 individual grants going to artists in 10 disciplines. Jackson was one of seven named in the Traditional Arts category. He says he plans to use the money to finish his workshop, completing sheet rock work and finishing a loft bedroom where visiting family and friends can stay.

Offering advice to others pursuing art, including carving, Jackson says it’s important to be able to draw.

“That is pretty much what I try to encourage younger people to do. There’s just no shortcut. If you have the ability to draw something, then you’re on your way,” Jackson said.

Other honors Jackson has received include a National Heritage Fellowship from the National Endowment for the Arts, a Distinguished Artist Award from the Rasmuson Foundation, and an honorary doctorate from the University of Alaska Southeast. In addition, Jackson was among six artists featured in the January/February 2021 edition of Smithsonian magazine.