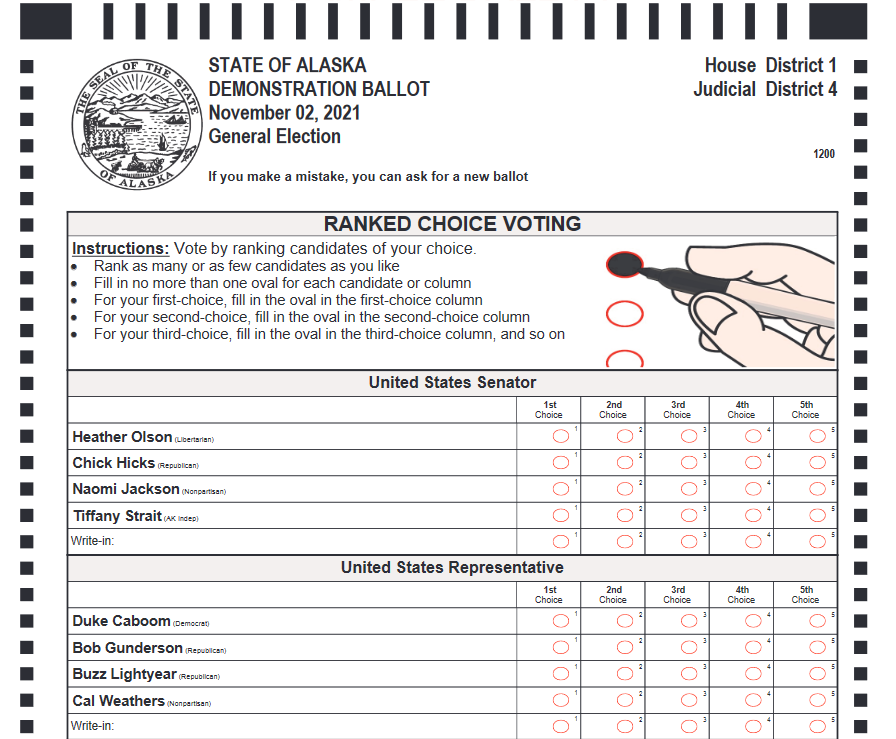 State election officials shared their first prototype of a ranked-choice ballot Monday, a portion of which is shown here. The full sample ballots for the top-four primary and ranked-choice general election are available online. (Alaska Division of Elections)

Alaska is preparing for its first elections under a new system green-lit by voters last year, and experts who have experience with the system Alaska is implementing have some advice for election administrators: educate and test.

The passage of Ballot Measure 2 made two big changes to the way Alaskans cast ballots in state and federal elections: first, it did away with party primary elections and replaced them with a single multi-party primary. The top four vote-getters in what some are calling the “tundra primary” will advance to the general election in November.

That’s where the other big change comes in: ranked-choice voting.

New election system, who dis?
Implementation of Alaska Better Elections Initiative (formerly ballot Measure 2), begins TODAY! Check out info here:https://t.co/IMgcJnMxcf
And be sure to look at the sample ballots and let us know what you think. We're open to suggestions. #RCVinAK

“One of the big things for me is that this new system of voting eliminates this common problem we’ve had with spoilers,” said Juneau illustrator and filmmaker Pat Race in a phone interview. He supported last year’s ballot measure.

He points to a few scenarios where ranked-choice might have been helpful — like the three-way 2018 governor’s race between independent Gov. Bill Walker, Democrat Mark Begich and the eventual winner, Gov. Mike Dunleavy. Walker eventually dropped out and threw his support behind Begich.

“You’ve got three candidates, and two candidates are really spending a lot of time just trying to talk each other into dropping out, which isn’t a productive policy debate,” he said.

Race says ranked-choice voting would fix that problem. But in practice, does it?

Voters in the state of Maine started using the system for federal elections back in 2018, and Maine Secretary of State Shenna Bellows said the answer is yes.

“One of the things that we observed is that candidates in three way races were working hard not only to win voters, but to win second-place voters,” Bellows told Alaska’s Energy Desk.

Bellows recalls doing some pretty creative outreach to teach folks how the system worked. She was a state senator at the time.

“I remember house parties that spring where we would bring different ice cream flavors, and bring sample ballots for people to choose: do they like the chocolate best, vanilla second-best, strawberry third-best,” she said, “And then go forth and demonstrate how that tabulation works.”

They’d count up everybody’s first choice votes — and if more than half the voters listed chocolate as their first choice, that was the winner, end of election.

If no flavor got more than half the first-place votes — let’s say chocolate and vanilla each got 40%, and strawberry got 20% — they’d go to a second round.

Bellows said outreach and voter education is important — but so is figuring out the best way to translate voters’ preferences into votes.

“Ballot design is very important. It’s important that voters be able to understand what their choices are and how to mark their ballot,” Bellows said.

Christopher Patten studies exactly that. He’s a researcher with the Maryland-based nonprofit Center for Civic Design.

I asked him what he thought of Alaska’s first prototype ranked-choice ballot. It lists candidates for each race with a grid next to it, labeled “1st choice,” “2nd choice,” and so on. There’s also a space for write-in candidates.

“Overall, this is a pretty good start on the ballot,” Patten said.

He said he’s a fan of the grid layout. Maine uses that same system.

“We’ve tested this with quite a few voters, and that this grid system, which you can see on our website, does seem to work the best, and so that is what we recommend,” he said.

“What I would suggest is that the illustration shows the hand actually marking on that grid that appears below, and then you show the correct way to do it — and you also show a couple incorrect ways to do it,” Patten said. 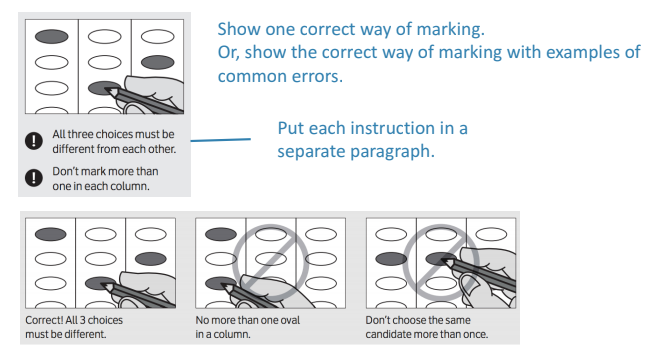 While there are some best practices his group recommends, he says there’s no substitute for testing the ballots on everyday Alaskans — in, say, a focus group.

Alaska election officials declined interview requests for this story and did not respond to questions about how the state plans to test its ballots.

Results for some races could be delayed

The switch to ranked-choice will likely have another consequence: a longer wait for results in close races — possibly even longer than last year, when Alaska was one of the last states to announce results.

State officials warn that when one candidate receives less than 50% of the first-choice vote, they won’t run the second round of tabulation until 15 days after the election. They say that’s to allow time to receive and verify absentee ballots.

Patten and Maine Secretary of State Bellows say they stand ready to answer any questions Alaska election officials have as they gear up for the state’s first ranked-choice election in November 2022.