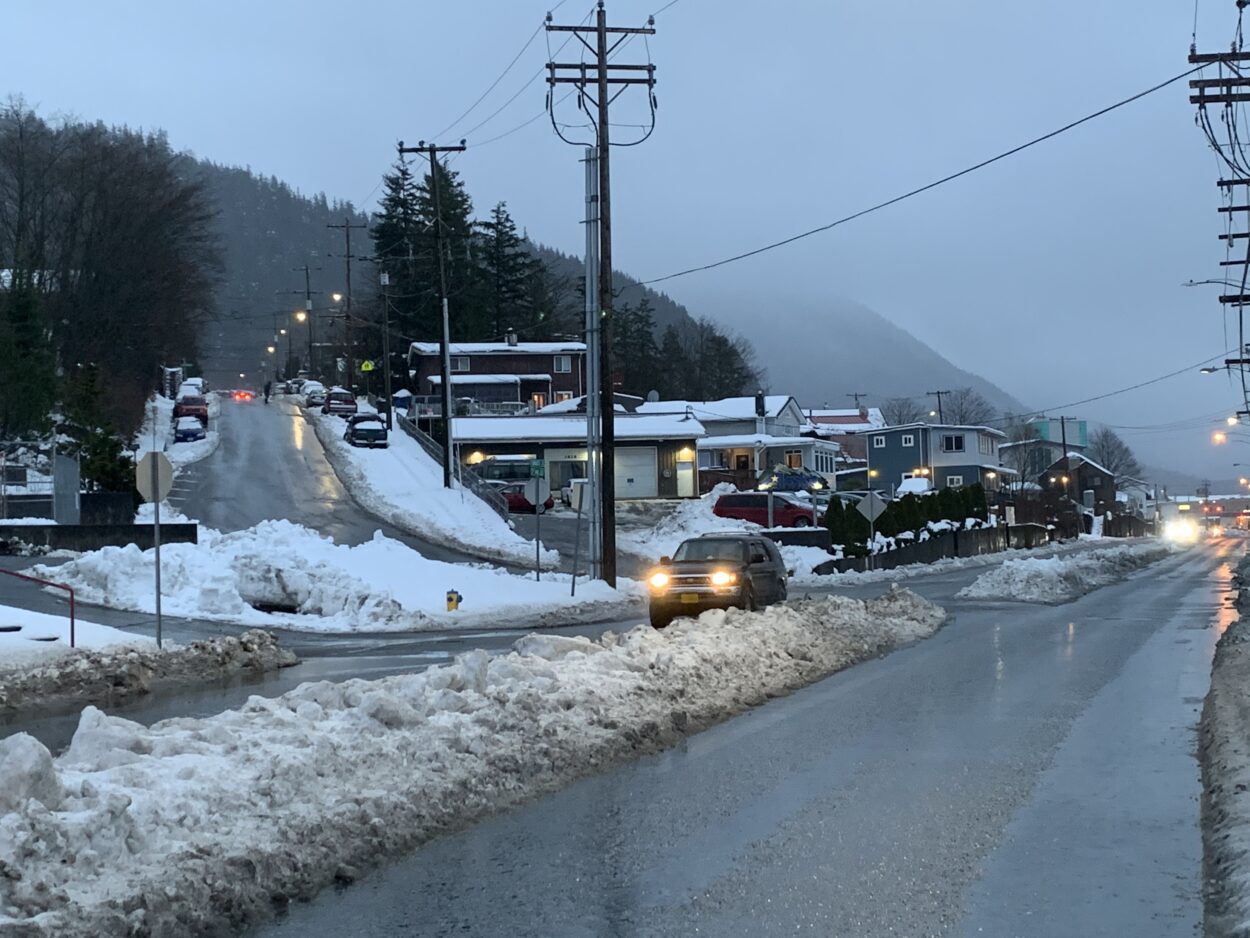 Ketchikan residents woke up this weekend to find their homes, cars and roads covered in as many as 20 inches of heavy, wet snow. They weren’t alone: communities across Southeast felt the impact of a late winter storm.

Ketchikan doesn’t often see nearly 2 feet of snow in a day, especially not this late in the year. The storm knocked out power in the early morning hours Saturday.

“It went through the intersection at Park Avenue, going up and over the sidewalk and railing and ended up essentially vertical in the creek,” Berntson said in a phone interview Monday.

The driver was taken to the hospital as a precaution. Police did not release their name.

Another driver went through a guardrail on Heneghan Street above Ketchikan’s Alaskan and Proud grocery store around midday Saturday. Berntson says the car flipped at least once as it fell down before it came to rest, balanced on its front end.

“Essentially straight up and down, being braced from completing the fall down the cliff by a handful of alders,” Berntson said.

The driver, identified late Monday as 46-year-old Michael M. Vig was medevaced out of town with serious injuries.

The snow didn’t just wreak havoc on Ketchikan’s roads — it also sank three boats in the harbors. Dan Berg, the city’s harbor operations coordinator, says it’s a lesson on why mariners need to check their vessels during a storm.

“The heavy wet snow that we got on Friday night and Saturday morning — there was about 12 to 15 inches in the harbor and that weight took several boats down,” Berg told KRBD. 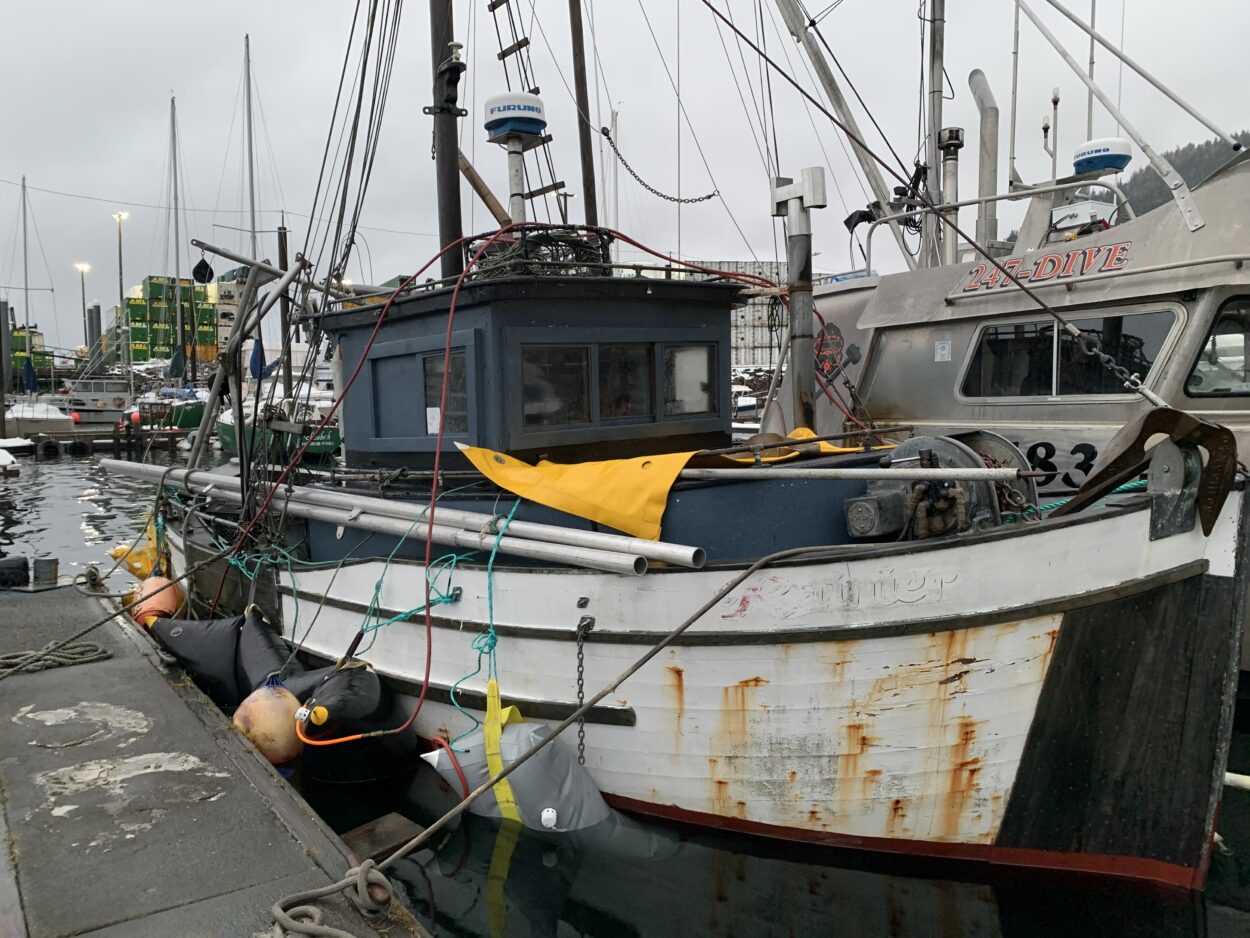 The three boats were a 20-foot pleasure boat and two trollers — a 30-footer and a 42-footer.

“I’m not sure why the big one went down,” Berg said. “It’s not often that we have bigger vessels go down unexpectedly but something happened with this one.”

It’s tough to put the storm in historical perspective. The region certainly isn’t used to snowfall like this, but precise records in Ketchikan can be spotty.

The airport used to measure snow totals. But that stopped in the ‘90s. These days, it falls to citizen scientists who report weather data: “co-op observers” who share their readings with the National Weather Service.

Forecaster Kimberly Vaughan said in a phone interview that the total of 20.8 inches from Friday afternoon to Saturday afternoon is one of the largest snowfall measurements recorded in the past decade or so.

Vaughan said a reading of 30 inches listed for March 26, 2008 is likely an error, based on reports from neighboring areas and other data.

“Because there’s only 0.8 inches of liquid, which is a really high snow ratio. So that likely is not a correct entry,” Vaughan said.

But Vaughan said it’s still well off the all-time record reported more than a century ago.

But Vaughan said the timing of the snow is not all that unusual — Ketchikan usually gets its last flakes of the year around mid-March .

Ketchikan bore the brunt of the Friday night storm, though Thorne Bay and Wrangell each saw eight to 10 inches.

Ketchikan got a few more inches Monday, but by then, most of the snow was concentrated in the central and northern panhandle. Haines reported 10 inches reported by noon Monday, and at least seven inches in Juneau. Pelican and Yakutat each reported more than seven inches of snowfall on Monday.

The snow turned to rain as temperatures rose Monday afternoon. Rain and snow were forecast in Ketchikan Monday night.