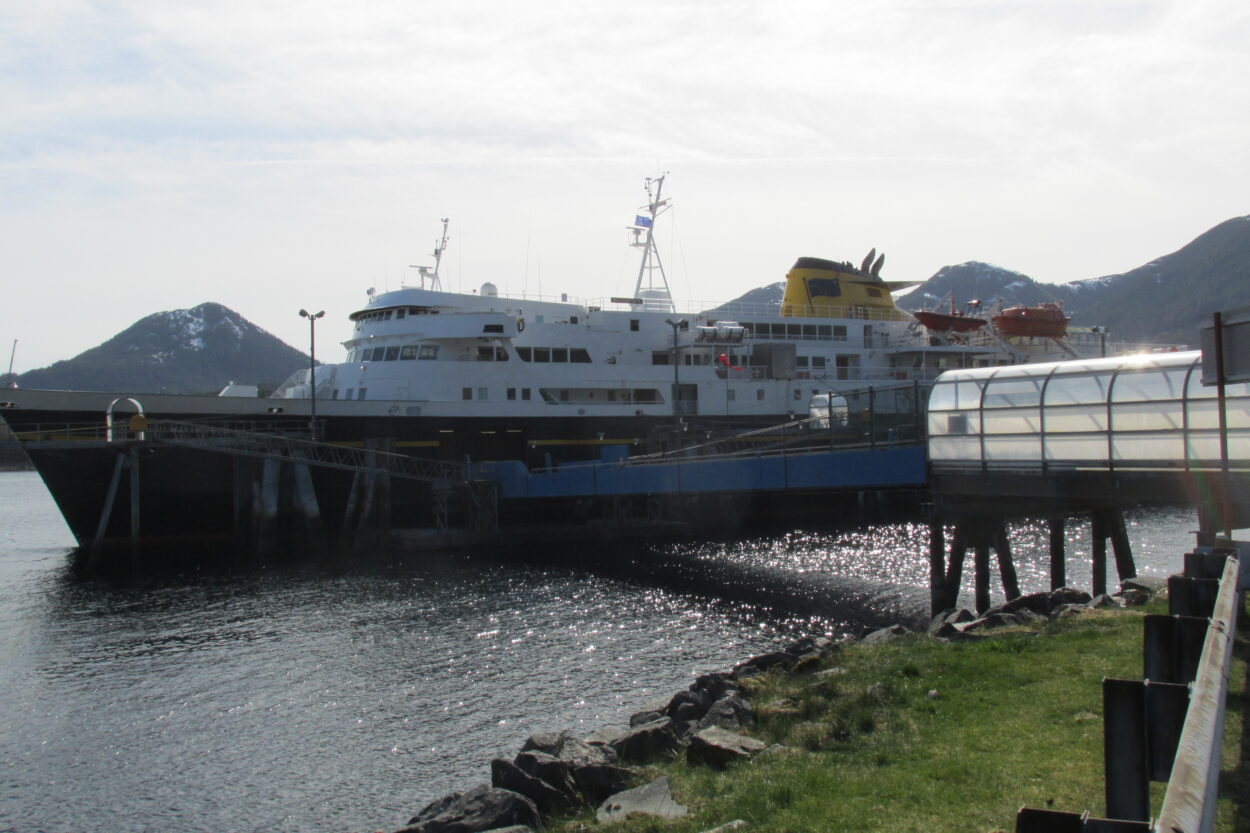 The 408-foot Matanuska mainline ferry remained sidelined on Monday after a fresh outbreak of COVID-19 among crew members and then engine failure delayed its departure. (Photo by Maria Dudzak/KRBD)

The Alaska Marine Highway’s Matanuska mainline ferry remains tied up in Ketchikan on Monday with 34 passengers and 33 vehicles on board as transportation officials grapple with newly discovered COVID-19 infections among at least two crew members and a mechanical failure that has shut down one of the ship’s engines.

The ferry arrived from Bellingham early Sunday and was scheduled to depart Ketchikan midday for ports north but was delayed after tests from the previous week showed  one crew member was positive for the coronavirus.

“Out of an abundance of caution, Matanuska was held in Ketchikan while the entire crew was tested, and one additional positive case among the crew was identified,” state Department of Transportation spokesman Sam Dapcevich said by email.

State officials have linked the two new cases as close contacts of the two engineering crew members that were infected last week and taken off the ship.

The departure remains delayed after the ship’s starboard engine failed with an unspecified problem. One of the infected crew members lives in Ketchikan and was allowed to home to self-isolate. The other is Juneau-based and remains on the ship, state officials said.

But a mechanical failure in one of the vessel’s new engines has furthered delayed its voyage. Mechanical failures plagued the ship a year ago shortly after it had undergone a $47 million overhaul of its main engines.

Officials haven’t said when they expect the ship would be ready to sail.

“The Matanuska is still in Ketchikan due to a mechanical issue with the starboard main engine,” reads a service notice issued Monday morning. “Engineering staff is in contact with technicians, there is not an estimated time of departure at this point.”

The Matanuska is a mainliner ferry in the fleet. It was scheduled to sail north to major Southeast ports including Wrangell, Petersburg, Juneau, Haines and Skagway. A second leg to Petersburg and Sitka is also scheduled this week.

Editor’s Note: A previous version of this story incorrectly stated the Matanuska was the sole operating mainline ferry in the fleet.