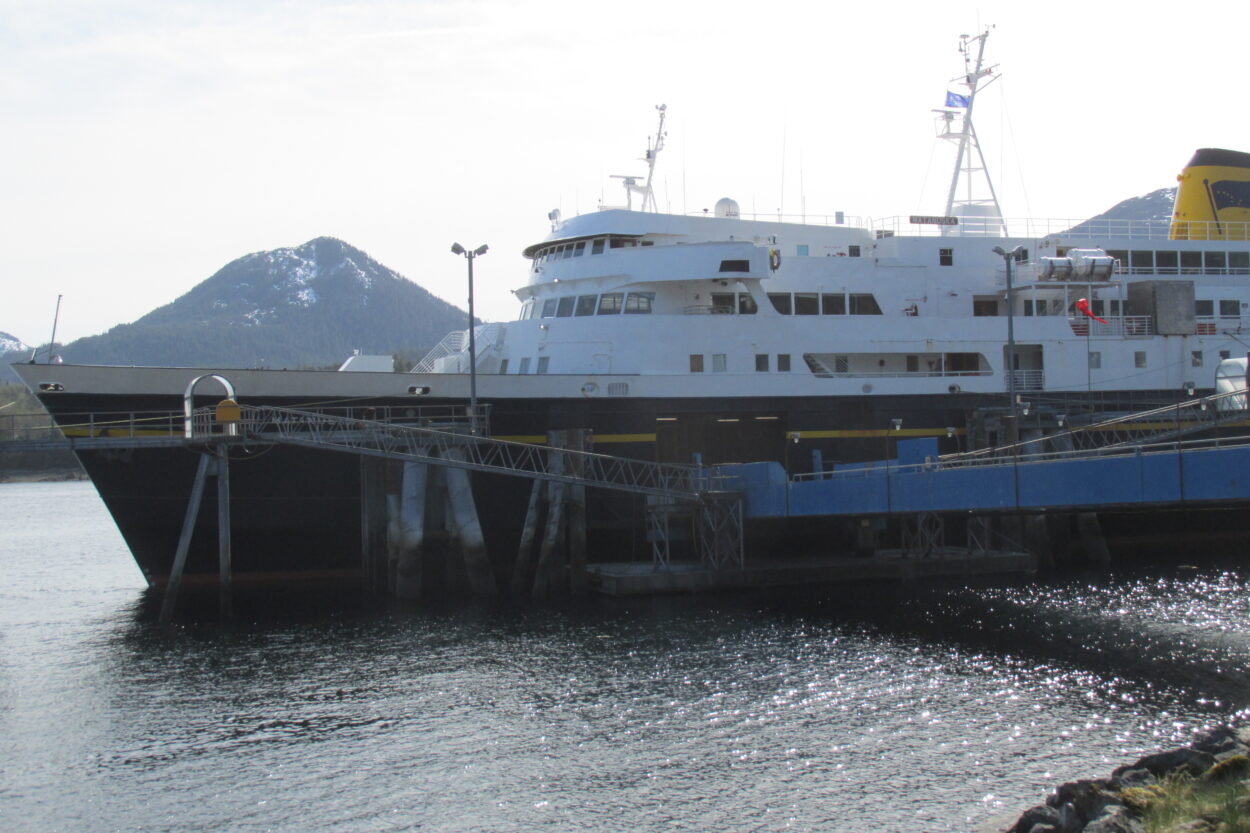 The Matanuska mainline ferry remained sidelined on Monday after a fresh outbreak of COVID-19 among crew members and then engine failure delayed the 408-foot vessel’s departure. (Photo by Maria Dudzak/KRBD)

WEDNESDAY UPDATE: The Department of Transportation has issued a revised sailing schedule and this statement:

After a mechanical delay, the Matanuska is scheduled to depart northbound from Ketchikan Saturday, May 1, stopping in Wrangell, Petersburg, and Juneau. Passengers and vehicles bound for Skagway and Haines will be transferred to the LeConte approximately 5:30 AM, Sunday, May 2, to continue the journey north. It is anticipated that the Matanuska will resume its schedule Wednesday, May 5, northbound from Bellingham. See the schedule update for more information.

The Kennicott will add southbound stops in Petersburg and Wrangell on April 29 due to Matanuska’s mechanical cancelation. See the schedule update for more information.

ORIGINAL STORY: The Alaska Marine Highway System ferry Matanuska is still broken down in Ketchikan and isn’t expected to move until the end of the week. The Department of Transportation said Tuesday that crews are awaiting spare parts for the starboard engine which failed over the weekend.

“It is anticipated she will get underway northbound Saturday afternoon,” DOT spokesman Sam Dapcevich said by email.

The mainline ferry was already delayed about 12 hours last Sunday after two crew members tested positive for COVID-19. They were close contacts of two infected engineering crew taken off the ship last week.

But a delay in test results apparently allowed a second group of infected crew to sail north from Bellingham last weekend. DOT says the 34 passengers and 33 vehicles still on the ship are being rebooked or refunded.

The loss of Southeast Alaska’s mainliner has repercussions across the region. It had been scheduled to call in ports across Southeast including Skagway which doesn’t have a hospital. That’s where Eric Strathy and his pregnant partner had planned to ride the Matanuska to Juneau to be close to a maternity ward for the final weeks of her term.

“You don’t want to be having the baby in Skagway or you know, any of the other smaller boroughs just for the health of the child,” Strathy told CoastAlaska. “So it is kind of a tough scenario to navigate with.”

Reduced passenger capacity imposed due to COVID-19 means the couple has limited options for getting their vehicle booked on the smaller ferry LeConte.

The Matanuska broke down about a year ago. It took more than a month to repair, effectively shutting down regional ferry service. That was just months after it had new engines installed as part of a $47 million overhaul at the Vigor Industrial’s shipyard in Portland, Oregon.

Editor’s Note: A previous version of this story incorrectly stated that the Matanuska’s overhaul at been done at Vigor’s Ketchikan shipyard.