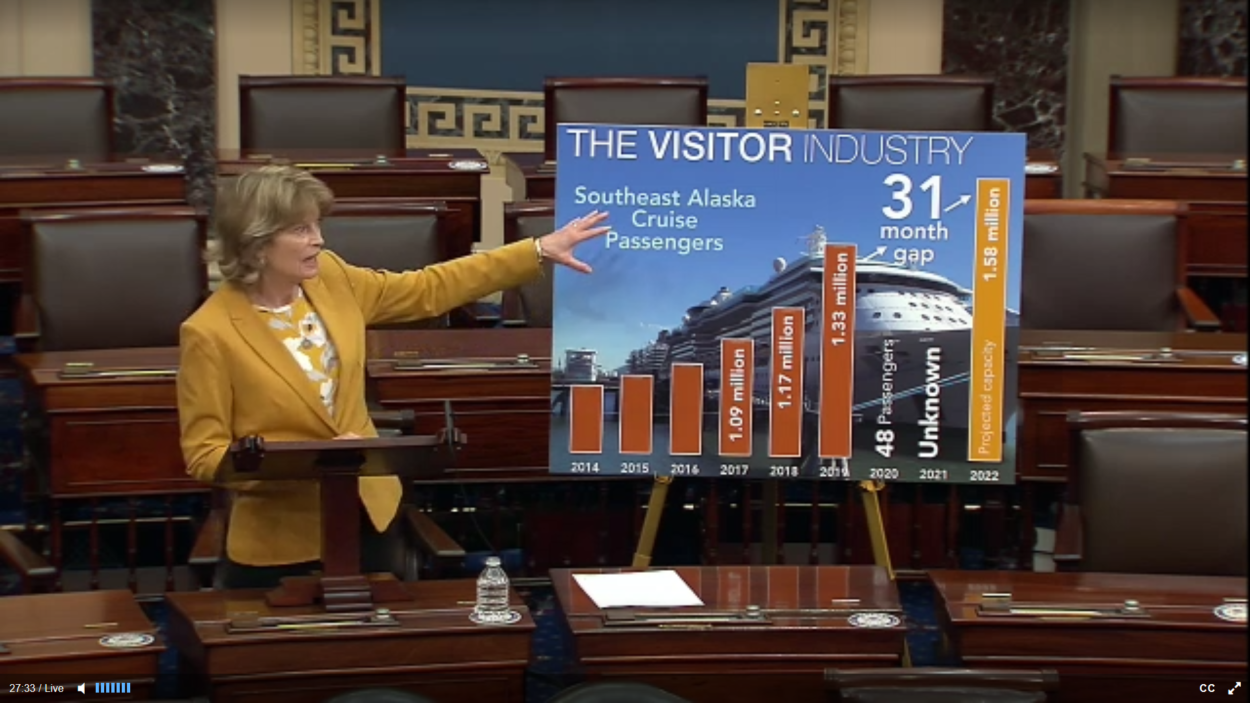 The U.S. Senate on Thursday blocked quick consideration of a waiver that would have allowed foreign-flagged cruise ships to visit Alaska ports this summer.

The Passenger Vessel Services Act, an 19th-century law that aims to protect the domestic shipping industry, requires Alaska-bound foreign-flagged cruise ships to stop in Canada. With Canada’s ports closed to cruise ships though next February due to COVID-19 concerns, the law effectively prevents Alaska’s cruise season from going forward.

Alaska Republican Sen. Lisa Murkowski asked the Senate Thursday to fast-track a short-term waiver of the law for voyages between Washington and Alaska. She said hope for a 2021 season was fading in Alaska.

“Back home right now, people are not talking about the season for 2021 coming up. The motto is, ‘Get through to ‘22.’ That’s an awful way to be approaching our situation, and so they have asked for help. They realize that anything that we can do to try to salvage even a few weeks of a tourist season is going to be important to us,” she said on the Senate floor Thursday.

She offered an amendment to the waiver bill, dubbed the Alaska Tourism Recovery Act, that would require cruise lines to carry defibrillators, provide passengers with a bill of rights and ask regulators to draw up new rules for cruise lines to return human remains when a passenger dies at sea. She said the amendment had been negotiated with two Democratic colleagues: Connecticut Sen. Richard Blumenthal and Washington Sen. Maria Cantwell. Blumenthal described the amendment as a “negotiated compromise” with Alaska’s Senate delegation.

“These are simple, common-sense changes that ensure cruising is safe for passengers and for crew,” Murkowski said.

She said the industry already adhered to two of the three provisions, though she did not specify which.

But Republican Sen. Mike Lee of Utah objected, stalling the bill. He said he was amenable to waiving the Passenger Vessel Services Act — he said he’d like to see it repealed entirely — but the amendment was unacceptable.

“Unfortunately the bill that’s now before us has deviated from that purpose. It now has poison pill provisions that add duplicative, unnecessary and unrelated regulations that will harm, not help the cruise industry,” Lee said.

Because Murkowski’s fast-track maneuver required consent from all present senators, Lee’s objection was enough to derail the waiver for the time being. But Alaska Republican Sen. Dan Sullivan, who co-sponsored the waiver, said he’s optimistic.

“Here on the Senate floor, despite what you’ve seen, there’s actually been momentum and movement, and I’m confident we can get there,” Sullivan said.

Federal maritime law is only one barrier to a summer 2021 Alaska cruise season. Orders from the Centers for Disease Control and Prevention have prevented large cruise ships from sailing since last March.

The CDC’s No-Sail Order was instituted after COVID-19 outbreaks aboard cruise ships spread rapidly in the early months of the pandemic. A 2020 Miami Herald analysis linked cruise ship outbreaks to more than 100 deaths among nearly 4,000 cases.

Last year, after pressure from the White House, the CDC replaced that blanket ban with what it calls the Conditional Sail Order, billed as a way to resume cruises safely. It requires that cruise companies submit detailed COVID-19 mitigation plans and conduct trainings and drills before sailing. But the CDC has yet to tell cruise lines what exactly those should look like. So, progress towards the resumption of U.S.-based cruises has been slow.

Last week, Sullivan and Florida Republican Sen. Rick Scott asked to fast-track the CRUISE Act, which would require the CDC to lift its order by July 4. But Washington Democratic Sen. Patty Murray objected, blocking easy passage. Murray said she was concerned that lifting the CDC rules would risk lives.

But there’s a ray of hope from the CDC: A letter sent to cruise industry figures says the agency “remain[s] committed to the resumption of passenger operations in the United States following the requirements in the CSO [the Conditional Sail Order] by mid-summer, which aligns with the goals announced by many major cruise lines.” The letter clarified guidance issued by the CDC in April regarding crew testing, vaccination and pandemic preparedness measures at ports that receive ships.

When the CDC issued updated rules for cruise ship sailings in early April, the mayor of the small Southeast cruise port of Skagway said he was concerned that some CDC rules on medical capacity at ports would leave small towns without a chance to receive ships.

Alaska’s cruise season generally runs from about May through September.