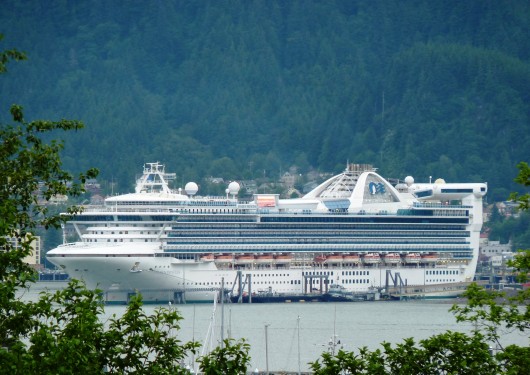 The federal Centers for Disease Control and Prevention says its latest guidance for cruise ship operators could allow passenger voyages to resume by midsummer.

But travel industry leaders in Southeast Alaska are raising concerns about the CDC’s new rules.

The new rules under the agency’s Conditional Sailing Order provide instructions for lines to start “simulated voyages” — those are sailings with volunteers designed to test COVID-19 protocols — and rules for trips with paying passengers.

Travel Juneau’s Liz Perry says a portion of the rules on shore excursions caught her eye. The CDC says cruise ship operators must “prohibit self-guided or independent exploration by passengers during port stops.”

“So there will be no allowance for going into shops, restaurants, other things independently. All passengers will have to stay inside that cruise bubble. That’s going to be problematic for almost all Southeast communities,” Perry said in a phone interview Friday.

And that means many Southeast businesses who rely on adventurous tourists and walk-in traffic could be left out.

Perry says she also fears that small tour operators who don’t sell their excursions onboard cruise ships could be left behind.

A spokesperson for Congressman Don Young said in a statement that the new CDC guidance “leaves much to be desired.” He says the agency has unfairly targeted the cruise industry while allowing planes and trains to travel with tightly-packed passenger compartments. And he says the CDC’s rules are just as “onerous” for vaccinated passengers as those for the unvaccinated — everyone, vaccinated or not, has to wear a mask in nearly all public spaces and maintain distance from non-household members.

The new rules do not require passengers to be vaccinated against COVID-19. But cruise lines won’t need to run a test voyage if they certify that more than 95% of passengers and 98% of crew members are fully vaccinated.

He says NCL will require everyone on board to be fully vaccinated.

“There isn’t another venue on Earth, not a school, not a factory, not your office building, apartment building, much less an entertainment venue like a casino, hotel or resort, that can make that claim,” Del Rio said. “We will be the safest place on Earth.”

He says his company’s ships will abide by a 74-point plan the company revealed last fall in addition to following the CDC’s guidance.

The Dunleavy administration has been critical of the federal government’s regulations. The state of Alaska recently joined a Florida-led lawsuit challenging the CDC’s restrictions on cruise ships. A Department of Law spokesperson says the state “continues to pursue all avenues for resolution.”

A lack of CDC guidance was one major barrier to this year’s Alaska cruise season. But another major hurdle remains: federal law requires the large cruise ships that visit Alaska to make an international stop, but Canadian authorities have banned cruise ships from their waters through next February.

The state’s congressional delegation has sponsored a bill that would waive that requirement for Alaska cruises, but an attempt to fast-track the proposal in the Senate failed last month. Travel Juneau’s Liz Perry says that if any large ships come to Alaska in 2021, it’ll be very late in the season.

“We’re focusing on a season of independent visitors. And for Travel Juneau, that has always been our focus. And here in Juneau, we’re doing a major fourth quarter push to get as many independent travelers into Juneau as we possibly can,” Perry said.

But she says she doesn’t think any Southeast communities have the infrastructure to take on enough independent travelers to make up for another lost cruise season.