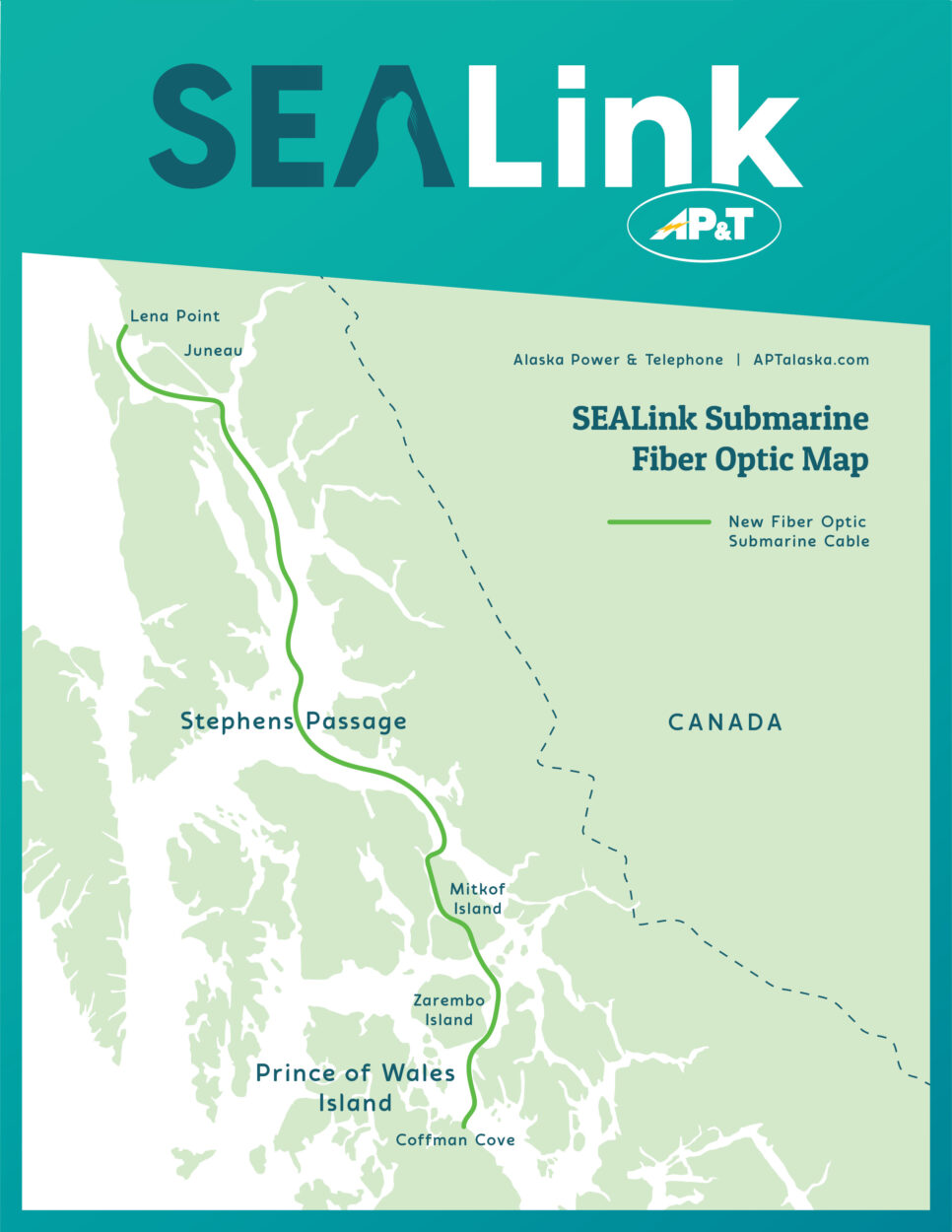 A new fiber optic cable is planned to connect communities on Prince of Wales Island with the mainland to boost internet speeds for homes, businesses and schools. A survey ship will soon begin mapping the seafloor to determine the best route for the 214-mile undersea connection to improve online access for the island.

Alaska Power & Telephone’s Jason Custer says the federally-funded project would dramatically improve internet access in the island towns of Kasaan and Coffman Cove, bringing the maximum available speed to at least 100 megabits per second, both for uploads and downloads. Those two communities currently rely on a combination of wireless and satellite internet.

“I would say the difference is like going between riding a mountain bike down a trail through the forest to driving over a superhighway full of data in a Lamborghini.” Custer said. “It’s an enormous difference in what is possible.”

AP&T says in a statement it’s also “on track” to build a land-based fiber optic network connecting homes and businesses in these Prince of Wales Island communities by 2022.

“When the cable is complete, in 2023, that will give us the capacity and the ability to offer very high speed internet in Coffman Cove and Kasaan. And from then, we would be looking at improving service in the other communities on Prince of Wales as well,” Custer said.

That timeline is roughly two years sooner than the company’s initial projections — last October, it said the cable would be operational by 2025. Custer said the undersea cable would supplement the existing microwave network that brings internet service to the island.

But the company cautions red tape could slow the project down.

“The schedule will ultimately depend upon the timing of permitting processes, and environmental approval processes managed by USDA,” reads the statement from AP&T.

The project is supported by a $21.5 million federal U.S. Department of Agriculture rural broadband grant announced last October under the Trump administration. AP&T said at the time it was committing $7 million of its own money to the project, which it’s dubbed “SEALink.”

The federal money, part of the so-called ReConnect Program, was approved by Congress in 2018. The company’s focus on Coffman Cove and Kasaan is a product of federal grant requirements — the federal funds are specifically targeted at improving access in those two communities.

“Prince of Wales Island has been struggling with some very big changes, trying to transition from an economy and communities based around the timber industry and resource development to trying to find something else. And with this project, Prince of Wales will be better positioned than ever to really diversify its economy and be sustainable long-term,” Custer said.

Tribal leaders, including the heads of the Central Council of Tlingit and Haida Indian Tribes of Alaska and the Organized Village of Kasaan said the project will help connect the island’s residents with each other and the rest of the world.

“Tlingit & Haida is excited to support the SEALink fiber project as it will work to close the digital divide that so many rural Alaskans are far too familiar with.  For tribes, high speed connectivity for our citizens is truly the latest way to express our sovereignty and move us to the forefront of the digital age,” Central Council President Richard Chalyee Éesh Peterson said in the company’s statement.

Alaska’s congressional delegation praised the project, with U.S. Sen. Lisa Murkowski saying broadband is “critical to connect communities” to things like telemedicine and distance learning in a statement included with the news release.

The Juneau-to-Coffman Cove cable would run through Petersburg, but Custer says improving service on Mitkof Island is “not part of the scope of the project.”

The marine survey is scheduled to be completed in August.

The submarine cable would add to a growing number of internet upgrades in Alaska — for example, Ketchikan’s municipal broadband provider fired up its own fiber optic cable connecting the community with Prince Rupert and the wider North American network last year.