Musical park in memory of Patrick Doherty dedicated in Ketchikan 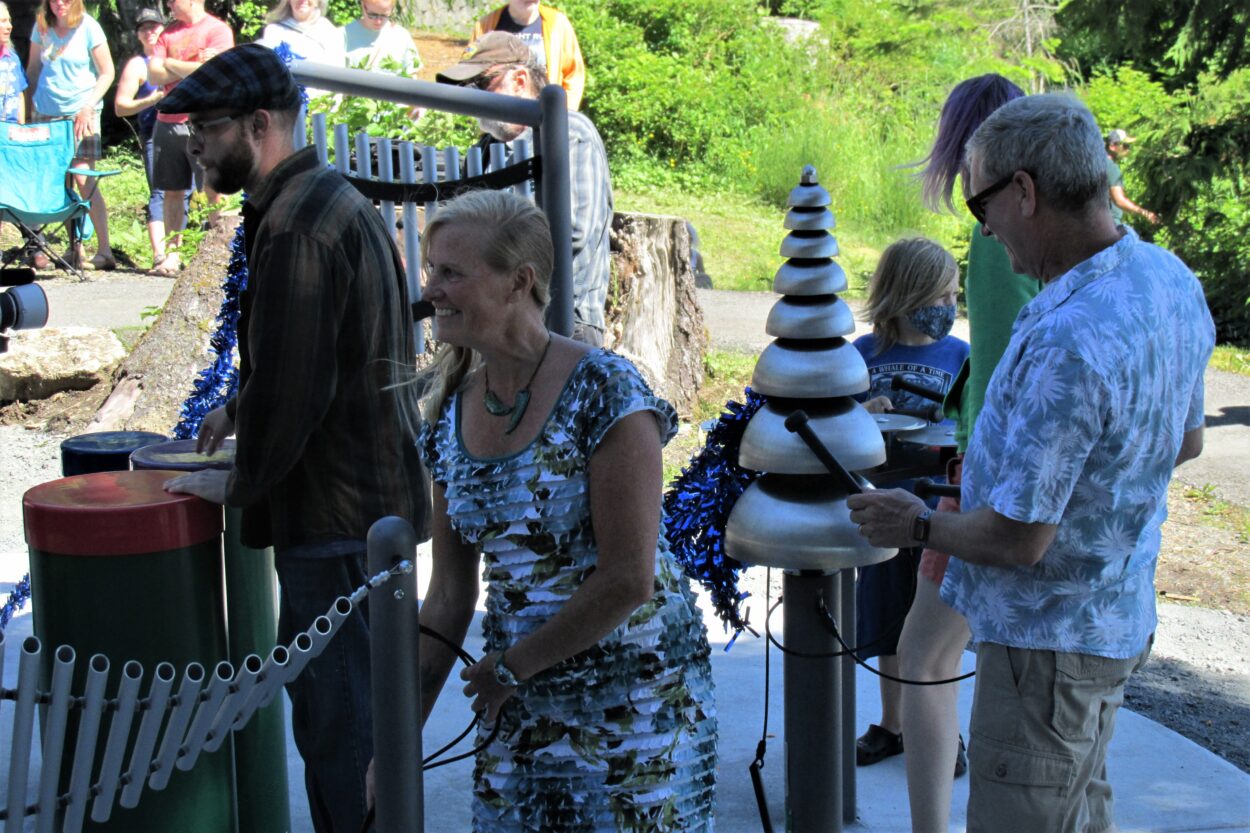 On a sunny Saturday afternoon at Ketchikan’s Rotary Beach, about 200 people gathered for the dedication of “Music Moves,” a musical park created in memory of a local musician who took his own life as a teen in 2009. The people behind the project say they hope it’ll serve as a place of serenity and healing for years to come.

When her son Patrick Doherty died at the age of 19, Ketchikan’s Susan Doherty says she wanted to find a way to honor him. She started a memorial fund, initially contributed to by family and friends. She wanted a project in her son’s memory that would benefit the community.

Inspiration struck during a trip to Sedona, Arizona, where she came across some outdoor musical instruments.

“They were just amazing. The sound is so beautiful, and there’s such peace when you play them. They’re just gorgeous. They’re beautiful sounding. I thought, ‘Well this would be cool for the community and benefit generations to come.’”

So she got to work. She contacted the nonprofit Ketchikan Area Arts and Humanities Council to get help applying for grants. Doherty also sought help from First City Rotary. Here’s the group’s president, Pat Tully.

“We were just blown away. We loved the idea of ‘Music Moves’ and loved the thought behind it, that is was in memory of her son, Patrick. And we decided that that would be our signature project for this year.” 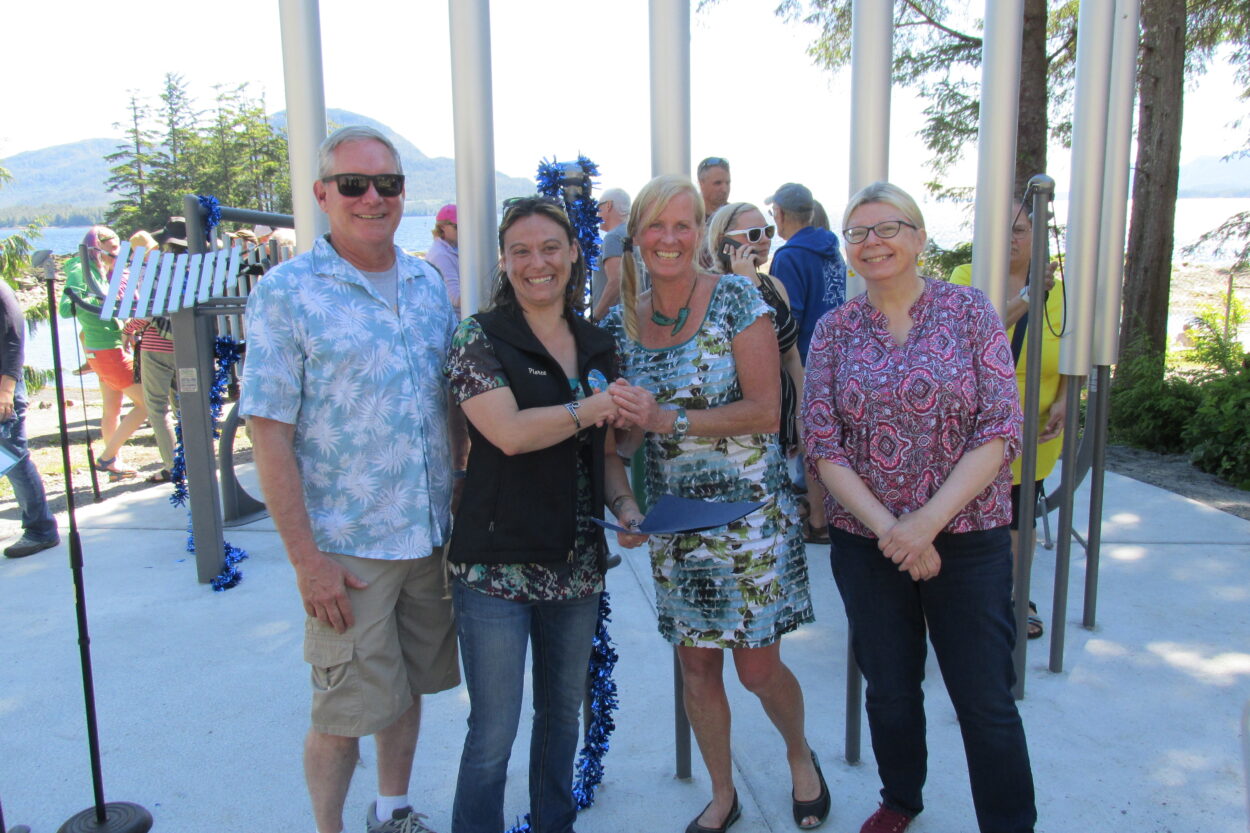 Rotary raised money for the project and helped lay concrete and install the instruments including tuned chimes, a harp, pagoda bells and drums.

The park, overlooking the pond at Rotary Beach, also known locally as Bugge’s Beach, was dedicated June 19. Dogs were barking, kids were playing and kayaking in the pond below, and shortly before the ceremony began, a humpback whale was spotted in the channel. Tully began the ceremony with opening remarks and thank yous.

“Last year, Susan Doherty came to speak to our club about this project to honor her son Patrick who was a gifted musician. Susan is such a positive and energetic person who inspired so many people in this community with her vision of a park where people can share her son’s love of music.”

“This project shows how the community can come together for a project that fulfills one person’s dream for the benefit of all. Thank you for leaving a lasting and harmonious impression on all of us here at the Ketchikan Gateway Borough.”

Susan Doherty thanked the community before cutting a ceremonial garland to officially open the park.

“Ketchikan just does Matthew 22:39 so well, ‘Love thy neighbor as thyself’ better than any community I’ve ever seen. Whether coaching youth sports, sitting on a non-profit board, supplying items to families whose homes burnt down, to raising funds for medical treatments. Ketchikan shows up time and time again.” Doherty said.

She continued: “It’s our hopes and wishes that this site will be a place of joy and fun. That people of all ages can play together and enjoy together. That the beautiful tones that are produced resonate and take hold in the heart and souls of all who venture here, and that the spirit of peace and joy remains with them after leaving.”

“So I guess we are saying this park is officially open…applause). 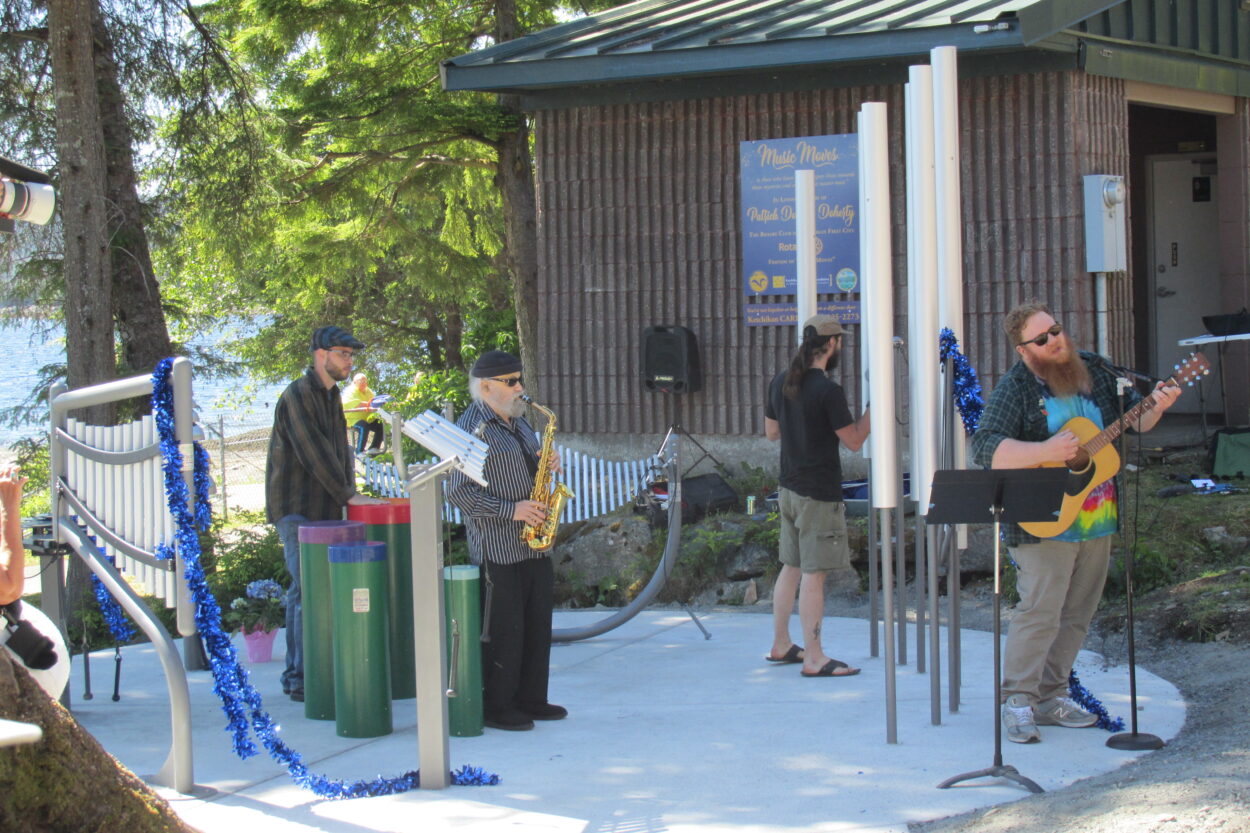 A handful of local musicians celebrated the new park with a new song. A poem written by Doherty before his death was set to music by his friend, Patrick Troll, who sang. 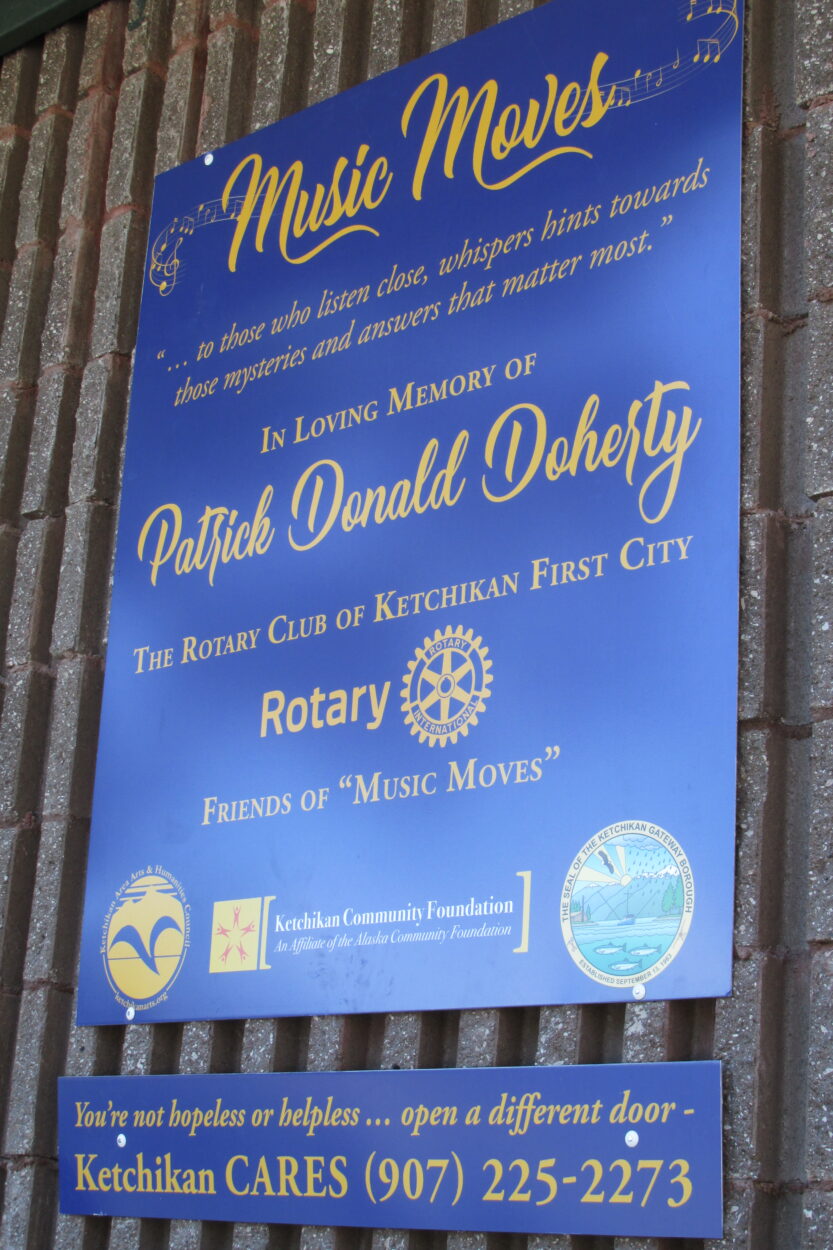 “Pat and I wrote some songs together back in the day and he wrote the words to this song. So we’re still writing music today and we’re playing with these instruments. It’s beautiful.”

A plaque mounted on a building next to the park in memory of Patrick Doherty acknowledges contributions of Rotary, the Arts Council, Ketchikan Community Foundation and the Ketchikan Gateway Borough. It also includes the number for the Ketchikan CARES hotline for anyone in crisis. That number is 907-225-2273. 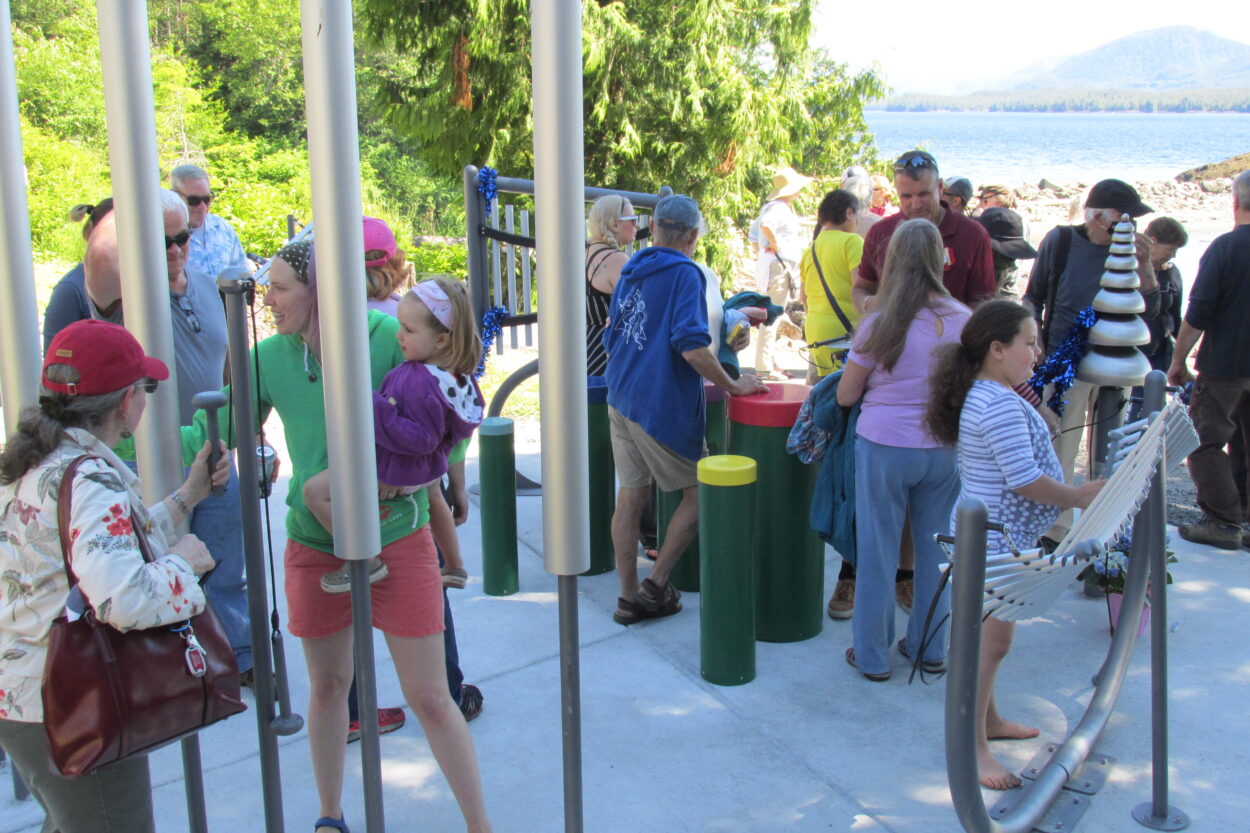