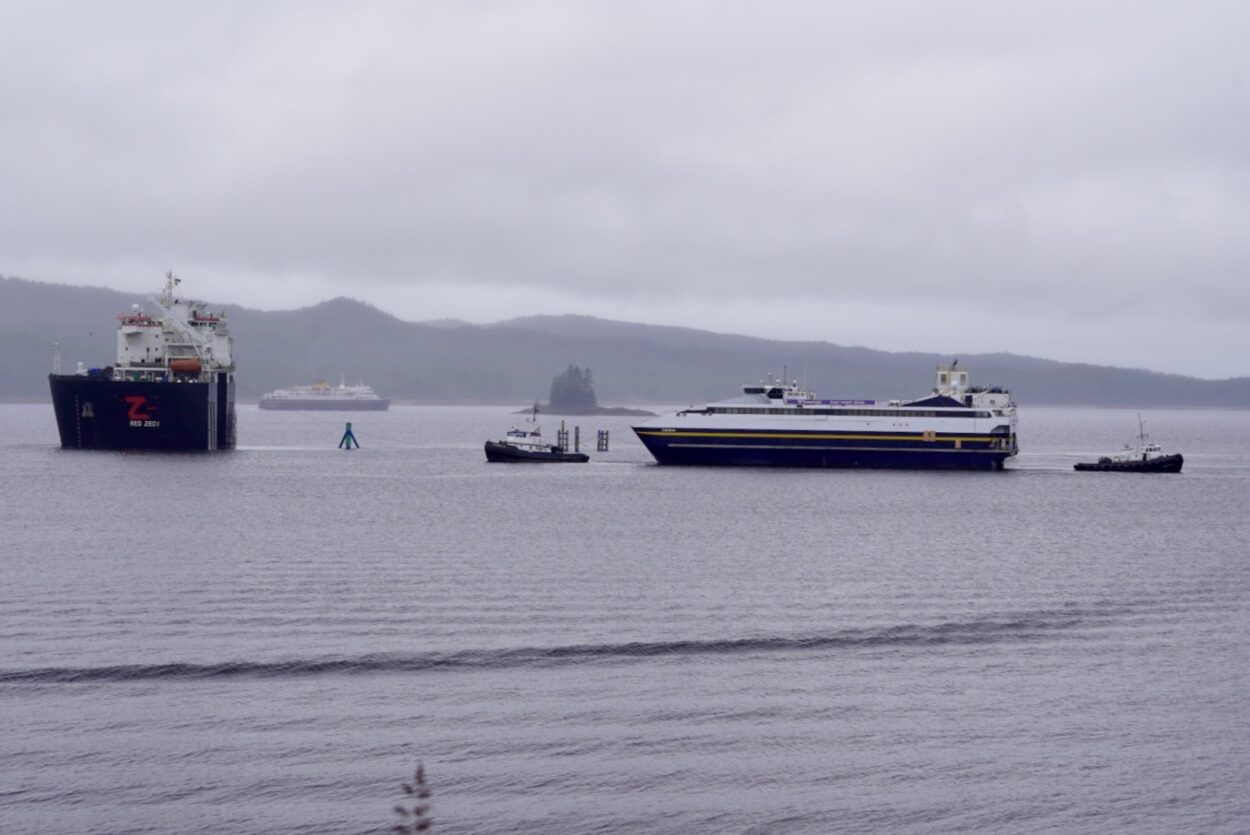 Two tugs position the Chenega as the former state ferry is loaded onto the Red Zed 1, bound for Spain. (Eric Stone/KRBD)

The 711-foot Red Zed 1 arrived in Ketchikan in April in anticipation of this moment. As Lecornu and a crowd of a couple dozen watch, the vessel is partially submerged — it’s taken on water to to allow the ferries to be pulled aboard and secured by divers. Later, the vessel will pump water out of its ballast tanks, bringing its deck — and the Chenega and Fairweather — back above the surface.

But from the shore, progress looks pretty slow.

The Red Zed had become a familiar sight over the past few months in Ketchikan’s Tongass Narrows. Angie Taggart said she looked out at the massive U-shaped vessel almost daily as she drove by on her way to walk her dogs at Ward Lake.

“We’ve all been waiting — I think the whole town’s been waiting to see this process for a few months. But it’s sad to see the ferries leave,” she said. 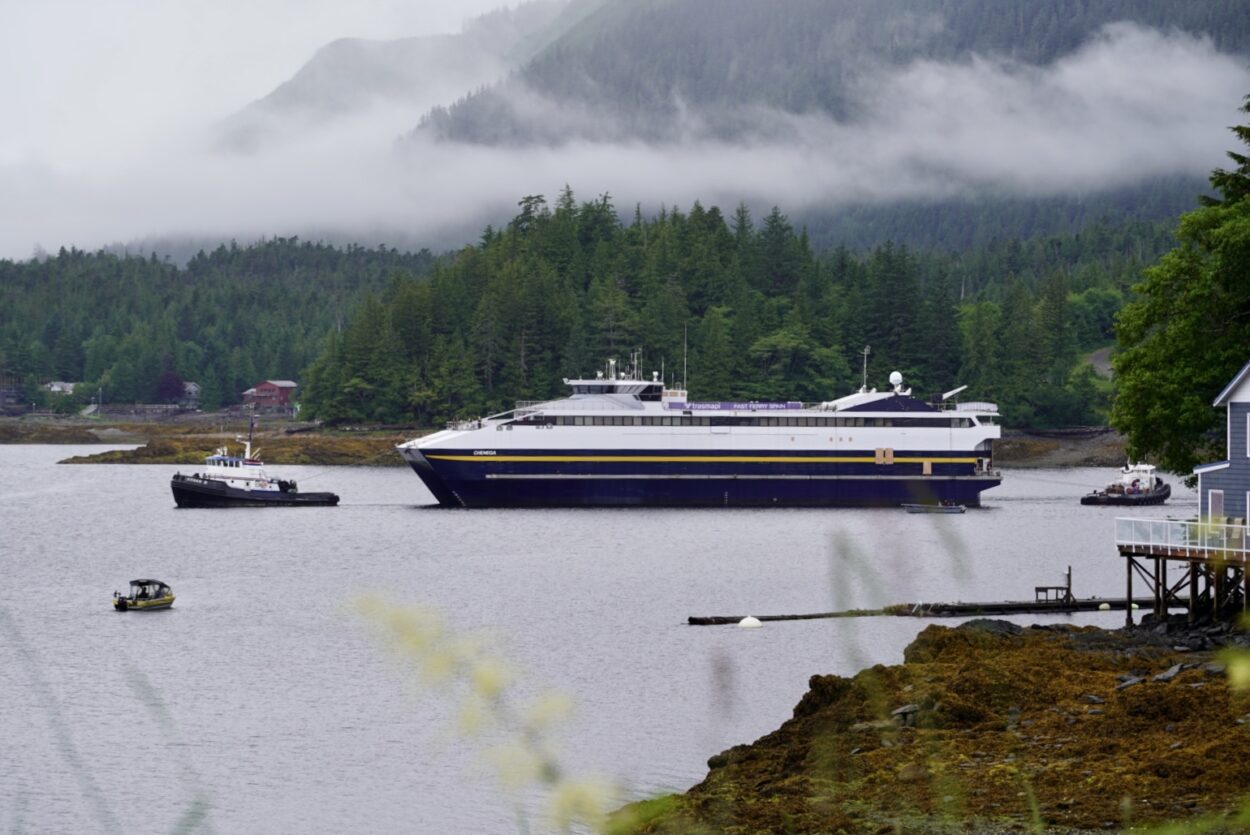 Two Amak Towing tugs pull the former state ferry Chenega — adorned with a banner with the name of its new Spanish owner, Trasmapi — out of Ward Cove. (Eric Stone/KRBD)

Several people said it was a bittersweet occasion.

He said he sees the vessels as a symbol of mismanagement of the ferry system. He says things started to change once the aluminum-hulled catamarans entered service in the mid-2000s.

The two fast ferries cost the state $68 million to build. Though their speed made them popular, they took more fuel and maintenance to run and struggled in rough seas. Cost-cutting decisions  pulled them from  service after about a decade servicing Alaska communities.  The state of Alaska negotiated $5.1 million for the pair in a sealed-bid auction to a Spanish ferry company. 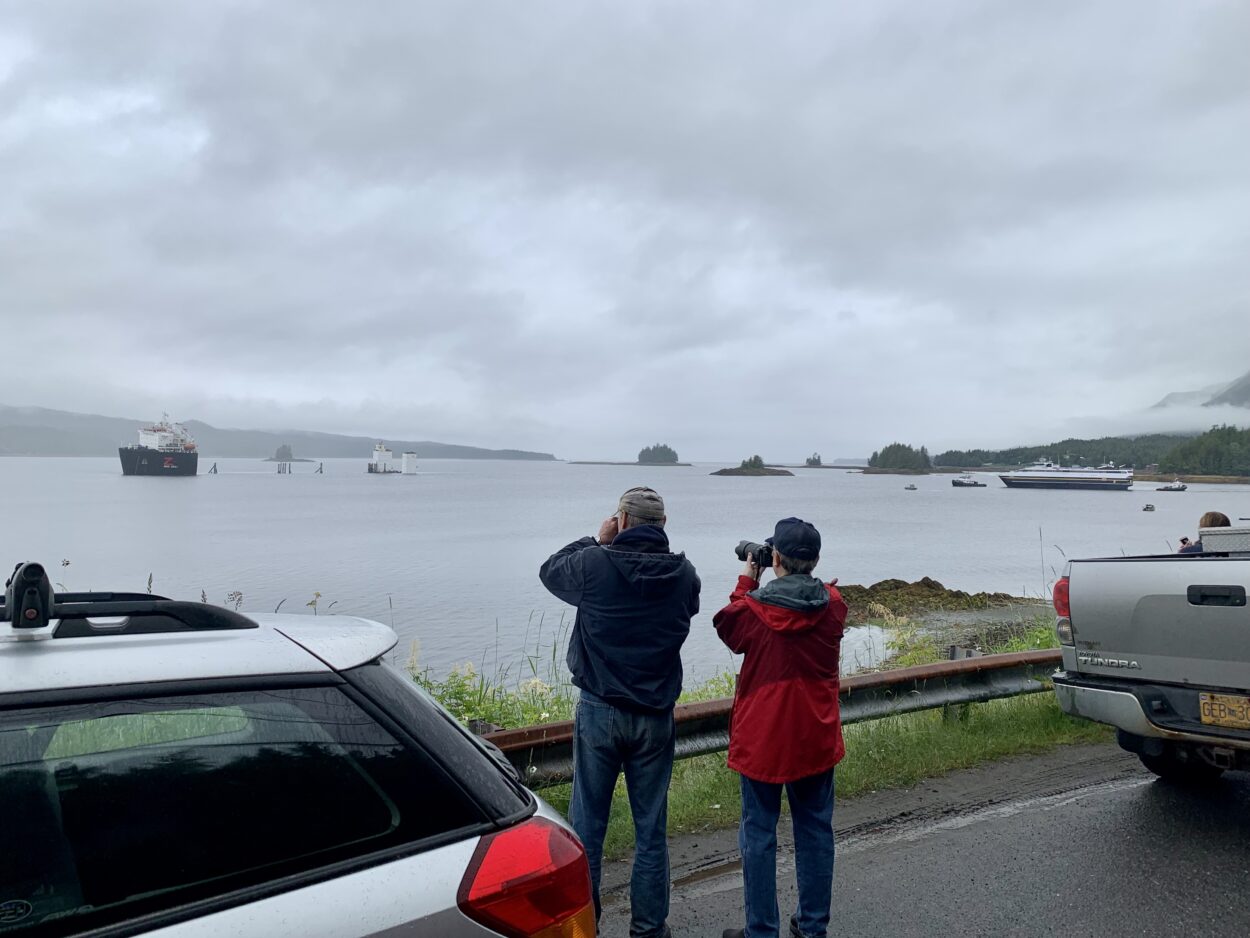 Hopkins said he’d like to see the state make smarter investments in the future.

He says the next ship the state ferry system buys should serve as a replacement for the Malaspina. That 450-passenger vessel is in layup and unlikely to ever sail a state ferry route again. Gov. Mike Dunleavy recently offered the 58-year-old ferry to the Philippines for free. 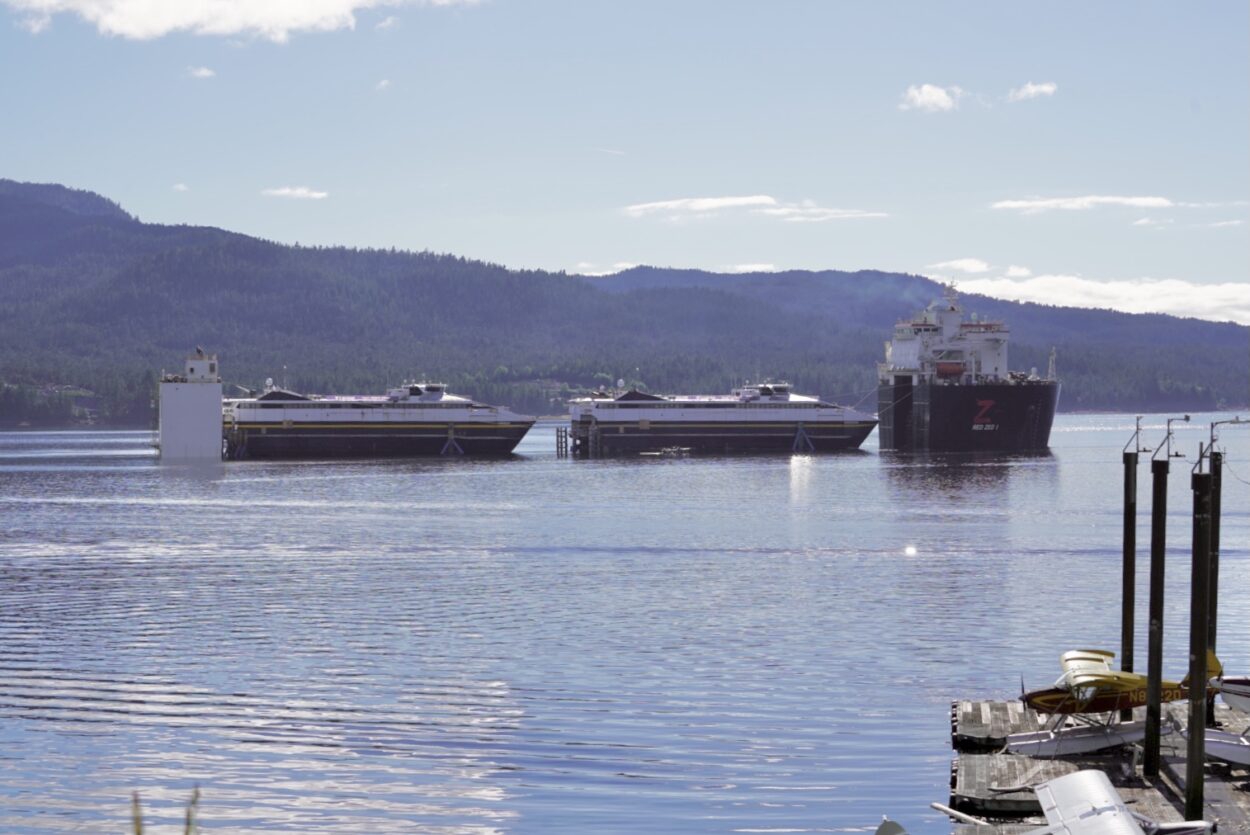 The Fairweather and Chenega sit on the partially submerged deck of the Red Zed 1 Friday afternoon. (Eric Stone/KRBD)

Several people shared fond memories of riding Alaska’s blue and gold ferries. Kathy Gibb Banie said she rode on the Malaspina’s maiden voyage as a baby. But she said she was dismayed by budget cuts in recent years that have meant less service.

“The ferry system is the lifeline down here. Unfortunately, it’s a lost lifeline, almost, and we’re getting tired of it,” she said.

The Spanish ferry operator Trasmapi runs catamarans to and from the island of Ibiza in the Mediterranean Sea. To get there, the Red Zed will ferry them to the Atlantic via the Panama Canal and the Strait of Gibraltar.