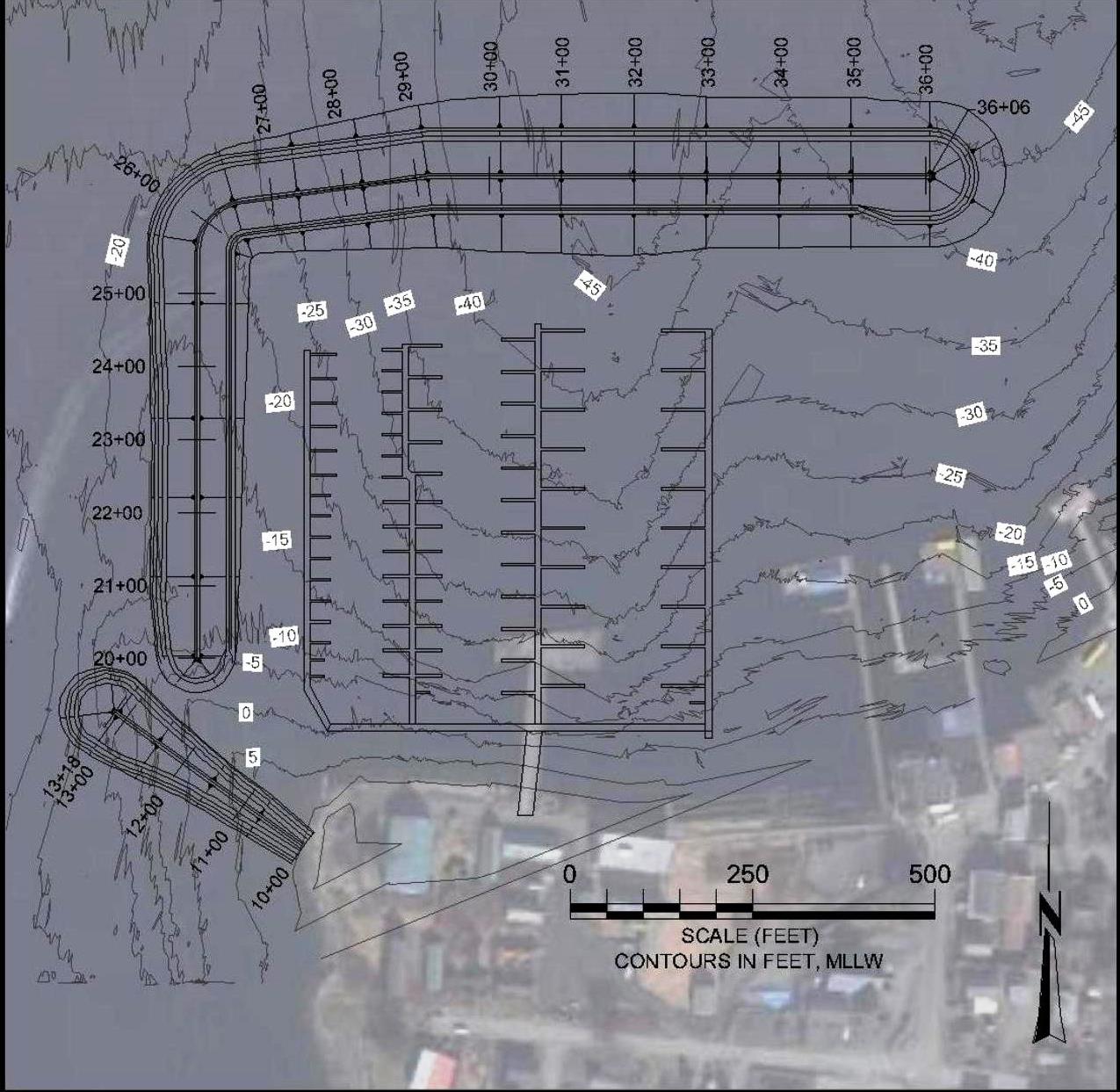 One conceptual draft of the design for a new Craig boat harbor. (U.S. Army Corps of Engineers image)

The Prince of Wales Island community of Craig will have to continue waiting for a new harbor project. The Alaska Legislature included funding to get the project started: it would add a new breakwater for a new harbor. But that’ll have to wait for at least another year as Gov. Mike Dunleavy has vetoed the funding.

For decades, the Craig cannery was the cornerstone of the western Prince of Wales Island community. Lifelong resident Ralph Mackie, writing in the Juneau Empire in 2018, called it “the heartbeat of town,” saying the community “woke up each spring with the cannery, and went into hibernation each fall” when the fishing season was over.

For more than two decades, the former cannery at Craig’s northwest corner has sat idle. Craig City Administrator Jon Bolling says the city would like to see the historic property play a role in the town’s future — as the site of a new harbor.

“Craig is a fishing community, and harbors are a central part of the infrastructure in town,” Bolling said in a phone interview.

The city acquired the cannery property in the mid-2000s, and ever since, Bolling says city officials have dreamed of turning the 10-acre basin into moorage space for 120-plus vessels. That would expand the total number of available slips in Craig by about half.

And it can’t come a moment too soon. Bolling says the city has a years-long waiting list for its two largest harbors. He says a new marina would encourage investment in the community.

Bolling says the U.S. Army Corps of Engineers is working on the first steps toward a new harbor.

“The phase we’re working on with the Corps right now is for what the Corps calls the navigational improvements, which in the case of the project here in Craig is breakwater design and construction,” Bolling said.

And that costs money. The Army Corps would pay 80% of the estimated $22 million, but the city of Craig is tasked with coming up with the rest.

“At this point, the city’s estimated share of the breakwater cost is $4.4 million. The funding that was in House Bill 69, that was approved by the legislature, included the $4.4 million appropriation. Unfortunately, it was vetoed by the governor,” Bolling said.

A statement from Gov. Mike Dunleavy’s office explaining the $4.4 million veto says he doesn’t take issue with the project but rather the mechanism that would fund it.

“The Craig Harbor project was included in the GO (general obligation) bond package the governor introduced last session to take advantage of low financing rates. Instead of taking advantage of those low rates, the legislature decided to use general fund dollars. The Governor decided to veto it for that reason,” wrote Dunleavy spokesperson Jeff Turner.

Some $8.3 million for the harbor was included in a $356 million bond package proposed by Dunleavy earlier this year. The additional money would go towards pilings and floating docks — the Army Corps is just paying for the breakwater, according to Craig administrator Bolling.

“The Legislature decided that we weren’t going to go forward with the bond package because of financial concerns going forward paying the debt service, and that we were going to use some of the COVID money to free up some general funds and go ahead and fund a lot of the projects that were in that bond package,” Stedman said in a phone interview. “And the Craig Harbor was one of them.”

Stedman says the project is badly needed in Craig. But since much of the federal pandemic relief funds don’t have to be spent immediately, he says the window for the project has not closed.

“We have the same opportunity next year with relief money for COVID to help with the capital budgets and the operating budget and other expenditures,” he said. “So we’ll take a look at it again next year.”

Rep. Jonathan Kreiss-Tomkins (D-Sitka), who also represents Craig, says he supported the governor’s bond package. But he says the veto was the wrong move — he says he’d just like to see the harbor funded.

“Penny-foolish, pound-foolish, a poor decision,” he said via phone. “It would have been, and hopefully still will be, a transformative infrastructure project for Prince of Wales. But this is a huge setback.”

For his part, Craig administrator Bolling says he’s just glad to see that lawmakers and the governor each want the harbor project to go forward.

“We recognize that there’s support for the project, and we want to build on that from this point on,” Bolling said.

Stedman and Kreiss-Tomkins each say they’ll propose funding for the harbor project again next year.