Ketchikan comes together to support Libby Oaksmith’s fight against cancer 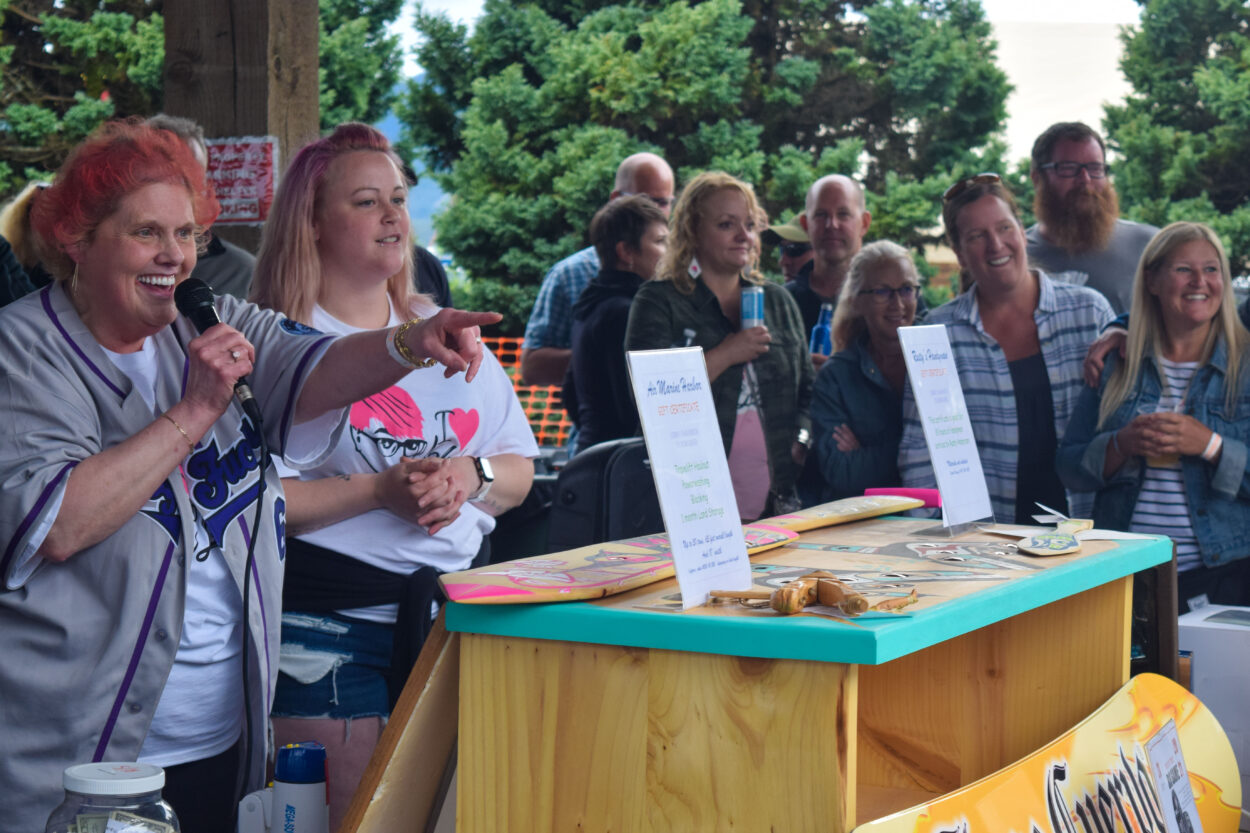 Paula Weisel points to a bidder at a live auction supporting Libby Oaksmith, a cafe manager who was recently diagnosed with cancer. The auction was part of a larger event to raise money for Oaksmith and her family. (Molly Lubbers/KRBD)

Community members are rallying to support beloved Ketchikan cafe manager Libby Oaksmith, who was recently diagnosed with cancer. They’ve brought meals for her family, hung signs in shop windows offering support — and opened their wallets. Friends of Oaksmith held a well-attended carnival and auction to raise money and show just how much Ketchikan loves Libby.

Jam-packed with hundreds of people, Ketchikan’s cruise ship docks were filled with live music, kids crowded around carnival games, and lots of love for Libby Oaksmith.

The entire event was to raise money for Oaksmith, who was diagnosed with Stage 4 cancer in late May. Oaksmith is being treated in Seattle, so she couldn’t be there, but hundreds of friends, neighbors and even strangers came out.

The outpouring of support has been overwhelming, said Oaksmith’s son Tristen Trujillo. Not even halfway through the event, he said that he’d seen at least 1000 people show up.

“We expected a pretty steady turnout throughout the day,” he said. “But it’s been coming nonstop. (There have been) so many familiar faces, so many unfamiliar faces. People I don’t even know are coming up and asking about Mom.” 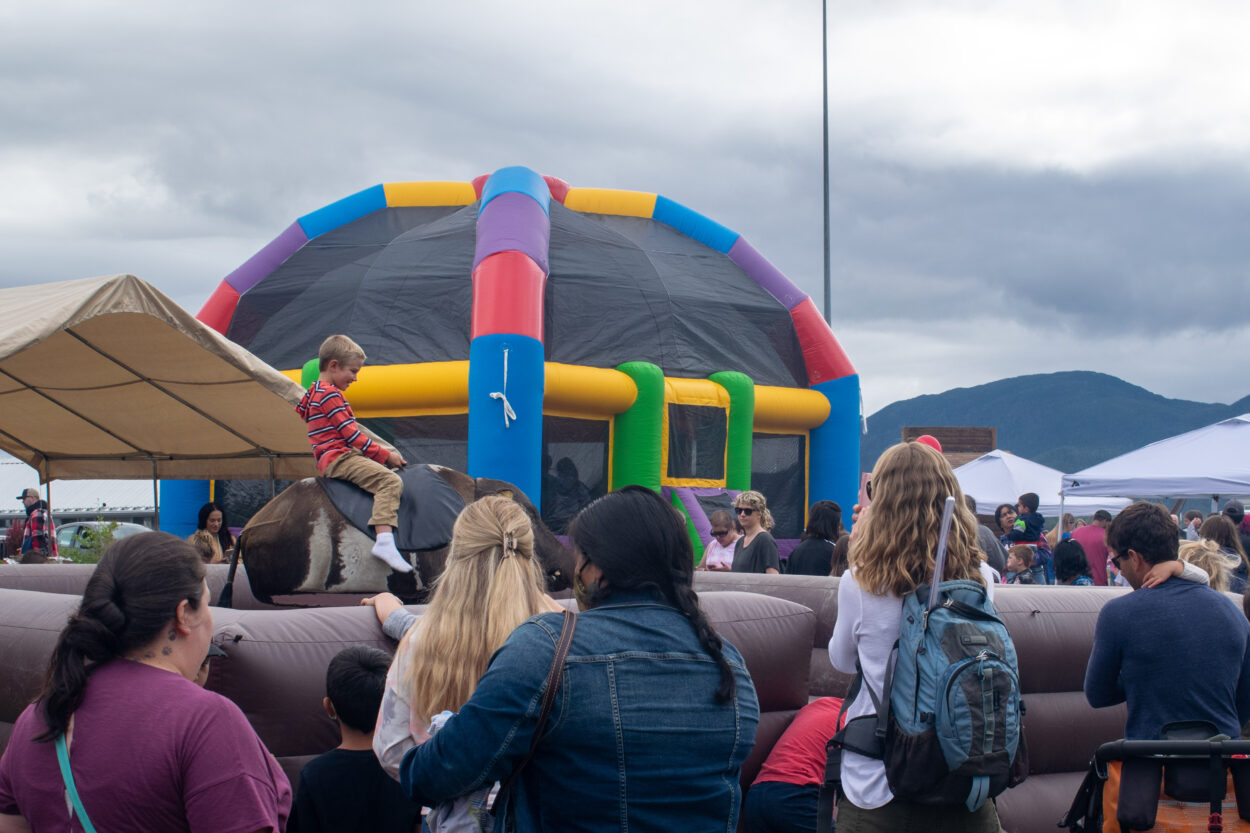 Trujillo said the love from the community didn’t just start at the benefit. After Oaksmith’s diagnosis, hundreds of messages poured in. People began dyeing their hair pink just like Oaksmith’s. Businesses all over Ketchikan started raising money for her fight against cancer.

But the scene at the benefit really cemented it: Ketchikan has come together for Libby Oaksmith on a massive scale.

“This town is Libbyville, let me tell you,” said her friend Paula Weisel. “She’s just Ketchikan’s sweetheart. I’ve never heard her say a bad word about anybody.”

Right now, Oaksmith is down in Seattle, receiving radiation therapy at Swedish Medical Center. But even though she hasn’t been in town for more than a month, her presence can still be felt all around Ketchikan. “I Love Libby” signs hang up in store windows, and stickers with that phrase — and her face — are plastered everywhere.

The woman behind those stickers is her sister, Angie Oaksmith.

“I just wanted it to be all over town so that she could see it,” she said. “People tell her that they love her. But I knew that it would touch her deeper than that.”

Listen to hear some of Oaksmith’s friends, family members, coworkers and cafe regulars describe her.

And when they describe her, a common theme comes up: how selfless she is. So the benefit — and everything else along with it — is a way for the community to give that love right back to Oaksmith.

Her sister Trace Oaksmith said Libby is incredibly grateful for the support and is already thinking of ways to make sure other people get the same help she has.

“She would do anything for anybody,” she said. “…It’s pretty amazing to see all these people turn around and do this for her. She’s so blown away.“

As the benefit finished down with an auction, people livestreamed so Oaksmith could watch from afar. All around the phone was a crowd of Oaksmith’s “warriors,” as she calls them, bidding like crazy. 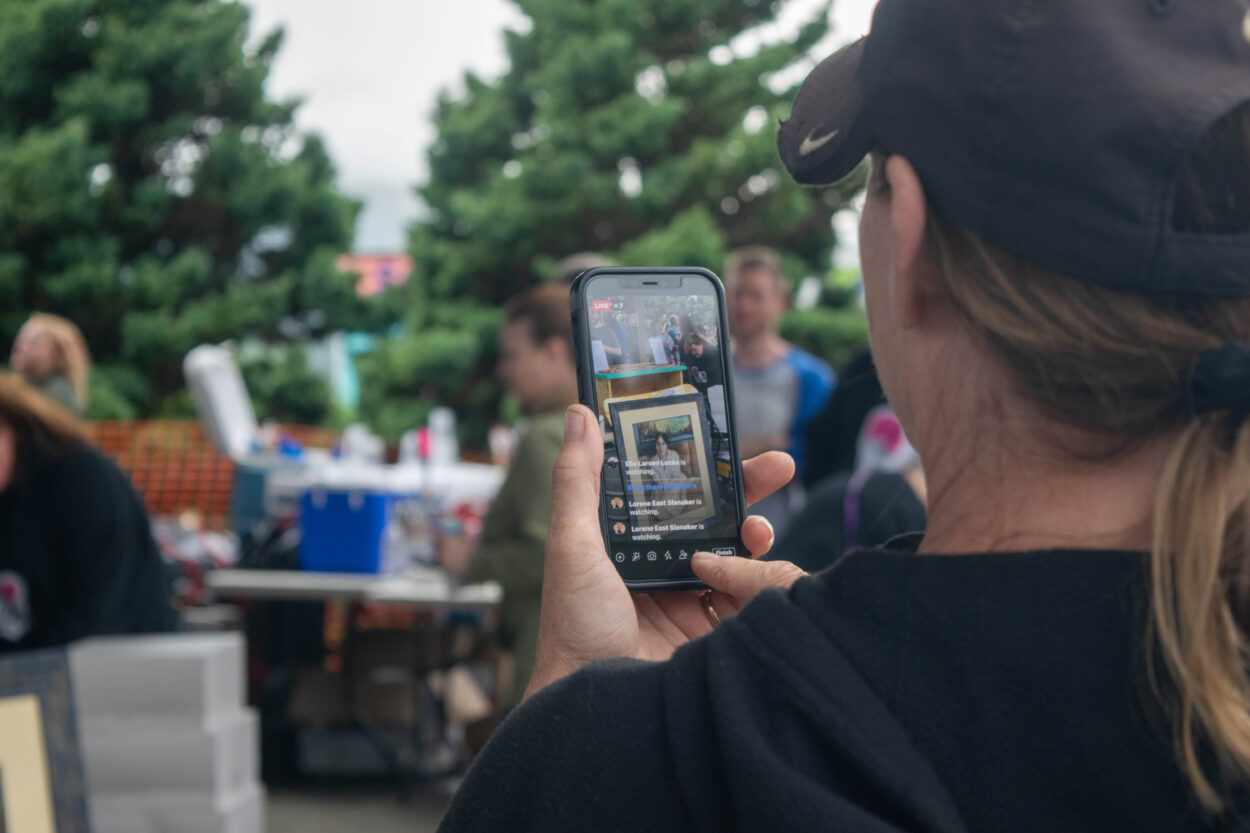 Oaksmith’s friend Susan Hoyt livestreamed so that Oaksmith and other supporters could watch the auction. Molly Lubbers/KRBD

Weisel, Oaksmith’s friend, announced for the live auction. She’s also the co-owner of the Arctic Bar, which sponsored the benefit along with Oaksmith’s workplace, the Pioneer Cafe. In all her years of living in Ketchikan, Weisel said she’s never seen a stronger surge of support.

“All you had to say was it’s for Libby,” Weisel said. “It’s like you couldn’t even finish saying that before they were saying, ‘What do you want me to do? I’ll help do anything.'”

That was true for George Gardner, who said he grew up on the same street as Oaksmith. He carved a paddle to auction off and worked hard to finish it in a fraction of the time it usually takes.

“I haven’t slept yet in a day and a half,” he said. “I did it for her. There was nothing but love that went into this paddle because of Libby Oaksmith.”

Two of Oaksmith’s friends bought it and split the cost — now, they’re sending it off to Oaksmith herself. It seemed that people were less in it for the items themselves, and more just there to raise money.

At one point, a carrot cake fetched $500. Then, the highest bidder donated it back, bid for it again, won, and ultimately gave the cake to the mom of one of Oaksmith’s close friends. 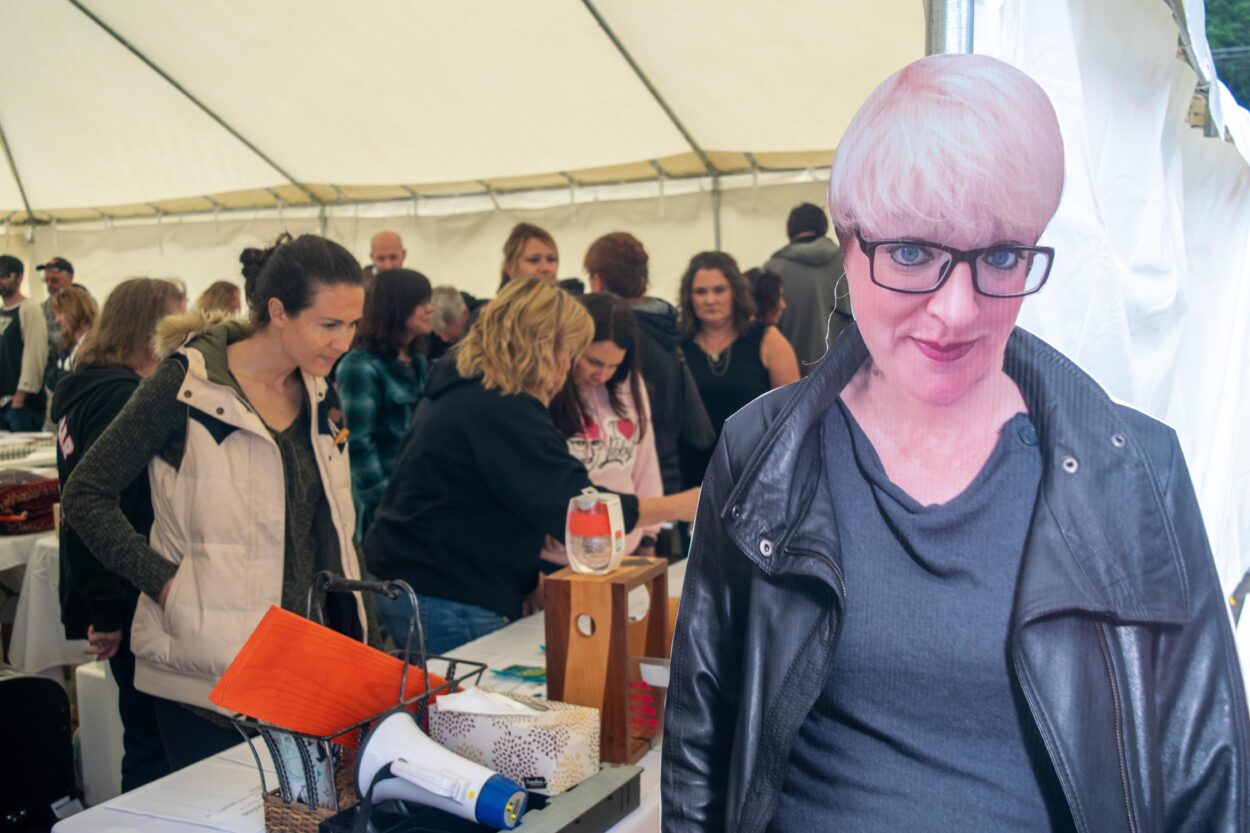 A cutout with Libby Oaksmith’s face greets people as they walk into the benefit. Behind it is a tent, full of people looking at silent auction items. (Molly Lubbers/KRBD)

Every show of support really does mean a lot, said her son Trujillo.

“It’s kind of pulled me out of that hole of: What really matters? Does this really matter?” he said. “It really shows me that it does matter and that there is really hope.”

Trujillo said the carnival and auction were a success, raising thousands and thousands of dollars. He ended the event with words of gratitude to the community:

“We came together strong, Ketchikan strong, folks,” he said. “I love you, Libby loves you! Ladies and gentleman, thank you so much.”

And her sister Angie Oaksmith says those two words —  thank you —  are all she can say.

“I don’t have the words,” she said. “There’s no way to say thank you enough. I will always be saying thank you.”

To donate to Oaksmith and her family, you can Venmo @LibbyFundraising-Oaksmith, or there is a bank account set up at Tongass Federal Credit Union, account number 10002147660108.