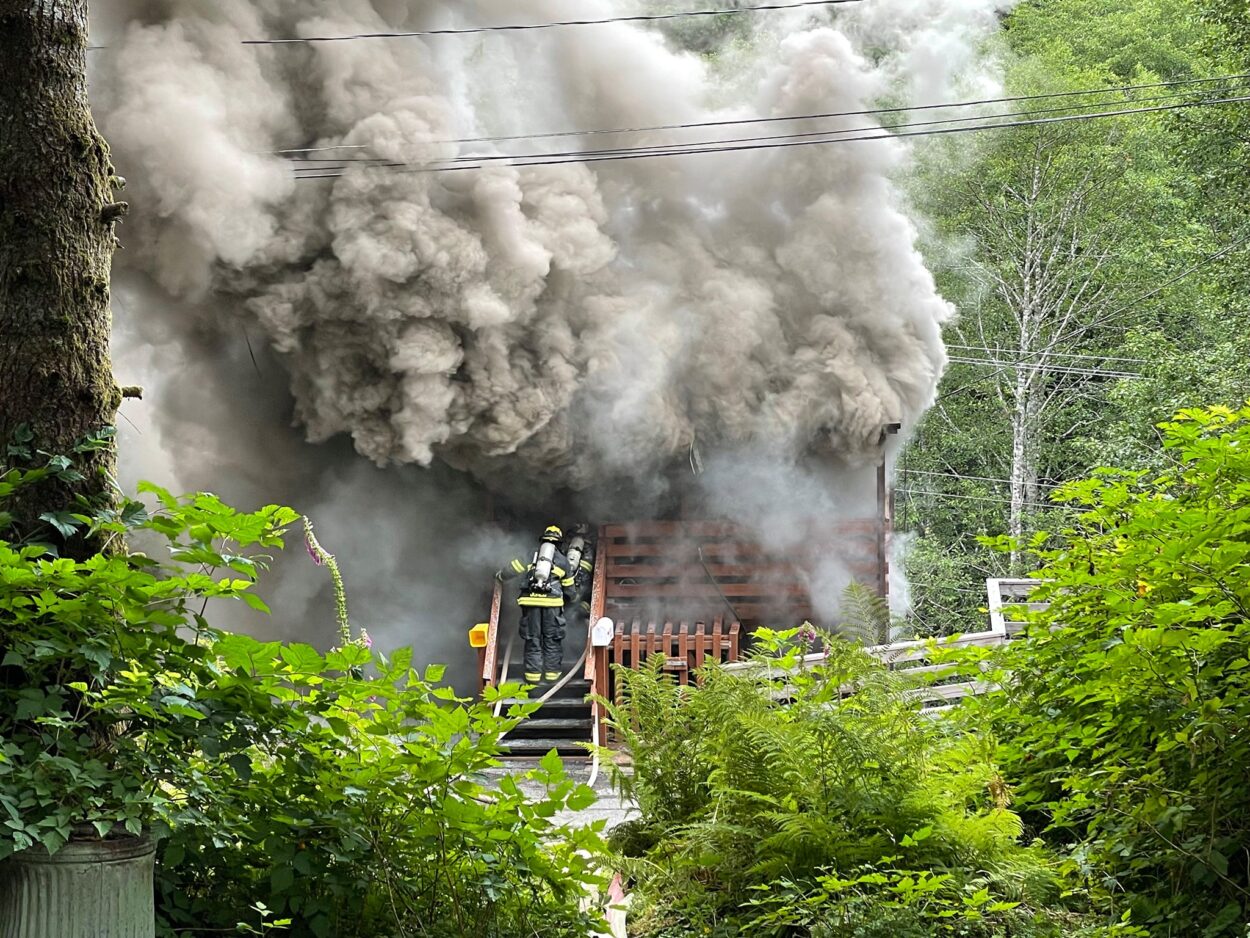 A Peterson Street home was engulfed with smoke Sunday afternoon. A firefighter stands on the steps, waiting to enter the house. (Courtesy of Ketchikan Fire Department).

Two Ketchikan residents were left devastated after a house fire Sunday afternoon. No humans were injured, but two pets were lost, and the home is uninhabitable.

Sunday afternoon, Sonya Skan said she woke up from a nap to the smell of smoke. She ran out of her house, grabbing two of her pets and not much else. When she tried to go back for her other dog and cat, she said she couldn’t get back in — the home was already full of smoke.

That moment is hard to describe, she said.

Skan said she’s still processing what happened. She and her husband Norman Skan were able to get to the second floor of the house after the fire was extinguished, but she said most of their possessions were lost or damaged.

The worst fire damage was concentrated in the lower levels of the house, with more smoke damage in the upper level, said Ketchikan Fire Marshal Gretchen O’Sullivan.

She said fire crews were called to the Peterson Street home about 2:30 p.m. Sunday. Fire officials said the home was equipped with smoke detectors, prompting Skan and neighbors to call 911. After the fire was extinguished, a team of investigators began looking for the origin and cause of the blaze.

“The building materials are all piled up in the basement,” O’Sullivan said. “So that’s where we think it may have originated, was the basement, just from the reports that we got when people first called in where the fire and where the smoke was.”

As of Monday afternoon, the cause of the fire was still under investigation, and O’Sullivan said the structure may be too unsafe to determine the cause.

Currently, Sonya Skan and her husband are staying with family, and Skan says that the homey atmosphere has helped. As they recover from the experience, community members have organized to support the Skan family. More than $8,000 dollars have been raised to help them recover and rebuild as of Monday afternoon. People have organized on social media to bring meals to the family in the coming days. And this Saturday will be a fundraiser, including a taco sale and silent auction.

“You see the town come together for people and always know that that’s something that we’re known for,” she said. “…But it’s really different being on this end of it. And I can tell you, you feel overwhelmed with love and definitely that people genuinely care. And that’s a good feeling.”

To donate to the Skan family, you can contribute at this Saturday’s fundraiser or this GoFundMe page. For those looking to get involved with bringing meals, you can schedule a day here.