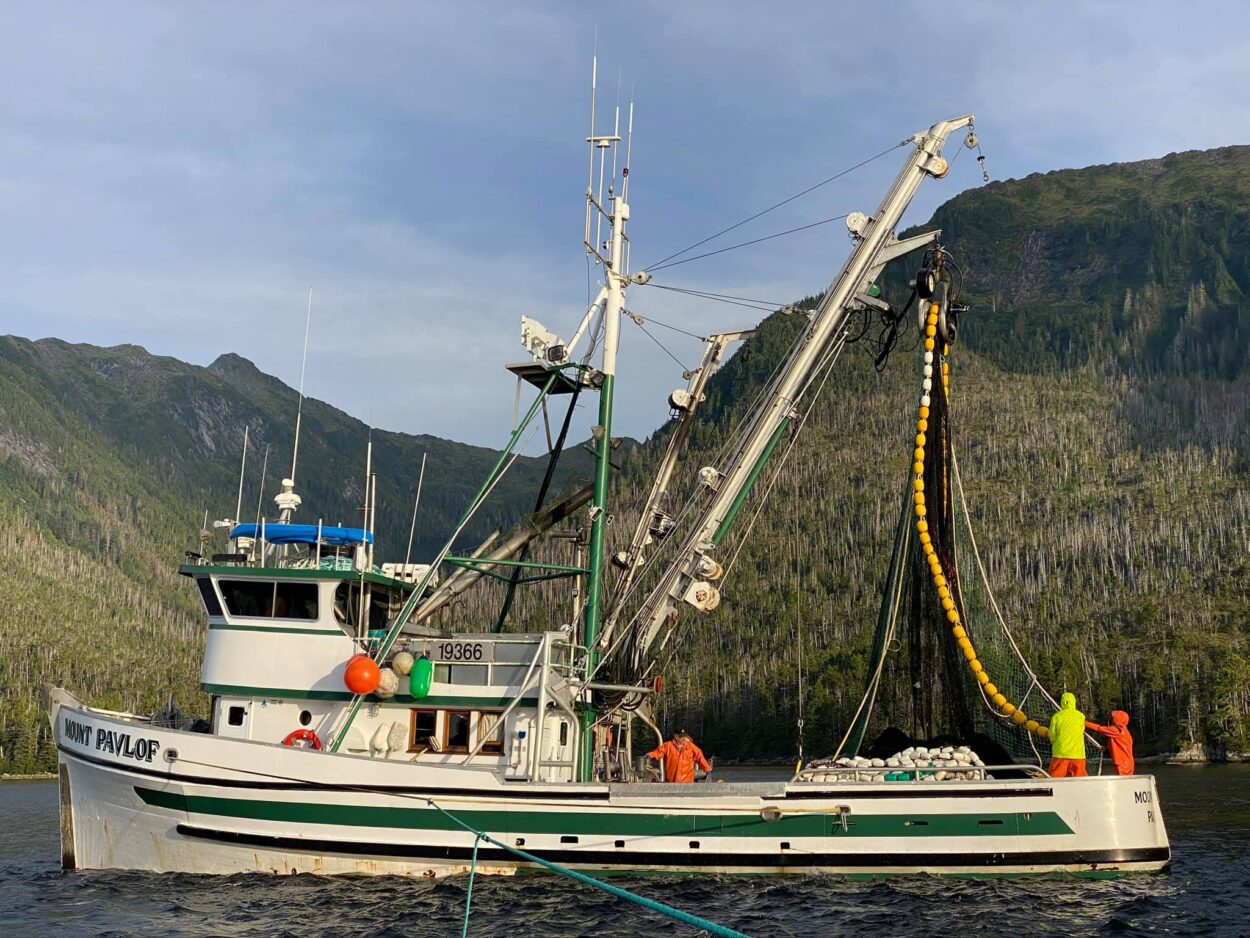 The 63-foot wooden seiner Mount Pavlof at the end of the 2020 salmon season. (Photo courtesy of Christopher Rood)

Four fishermen escaped with their lives over the weekend after a seine vessel sank south of Ketchikan. Crewmembers from another fishing boat heard their distress call over the radio and arrived in time to rescue them.

Around 3 a.m. Sunday, Pete Feenstra says he and a three-person crew were readying themselves for a salmon opener south of Ketchikan.

Then he heard a mayday call from the radio. The Mount Pavlof, a fellow seiner, needed help.

“They were kind of booming in on the radio — (they) sounded a lot closer than where they had said that they were,” Feenstra said in a phone interview Wednesday.

Feenstra says he looked at the navigation system aboard his 56-foot seiner, the Noble Provider, and saw that the vessel in distress was less than a mile away. And he knew what he had to do.

“Pulled up anchor and we just flew over there, and by the time we got there the boat was pretty much gone. I saw the stern sticking out of the water and the skiff, and they had crawled in the skiff, but the skiff was still attached to the boat. So I sent my skiff over and they jumped in,” he said.

He says they tried to save the skiff as the 63-foot fishing boat went down. But as it  sank 270 feet beneath the waves, the skiff went with it.

“And I just told my guys to cut the line — you don’t want to jeopardize anything else,” he said. “So we cut the line, and within seconds, it was gone.”

They returned to the Noble Provider, where a Ketchikan-based 45-foot Coast Guard response boat picked up the four shaken, but otherwise unharmed, crewmembers and returned them to shore.

It’s not yet clear what caused the Mount Pavlof to go down — its owner, Rick Rood, didn’t respond to interview requests on Wednesday. The Coast Guard is investigating, said Chief Petty Officer Kip Wadlow.

“Our goal is to promote the health and safety of mariners throughout the state, and we want to make sure that if there are any issues that need to be improved, that we can identify those and potentially make changes later on down the line for commercial fishing vessels,” he said.

But one thing is certain: it was a harrowing experience for all involved, Feenstra said three days after the incident

“I’ve seen boats on the rocks, I’ve been on a boat on a rock. I’ve been on a boat that caught fire and sank — my own boat. It’s a scary feeling no matter what side of it you’re on,” he said. “Obviously a lot more on the side of the person on the boat.”

As of Wednesday, there’s no word on whether crews will attempt to salvage the 72-year-old wooden vessel. State records show it has fished in Alaska since at least 1978.

Correction: An earlier version of this story misstated the length of Sunday’s seine salmon opener. It was 15 hours, not 18.