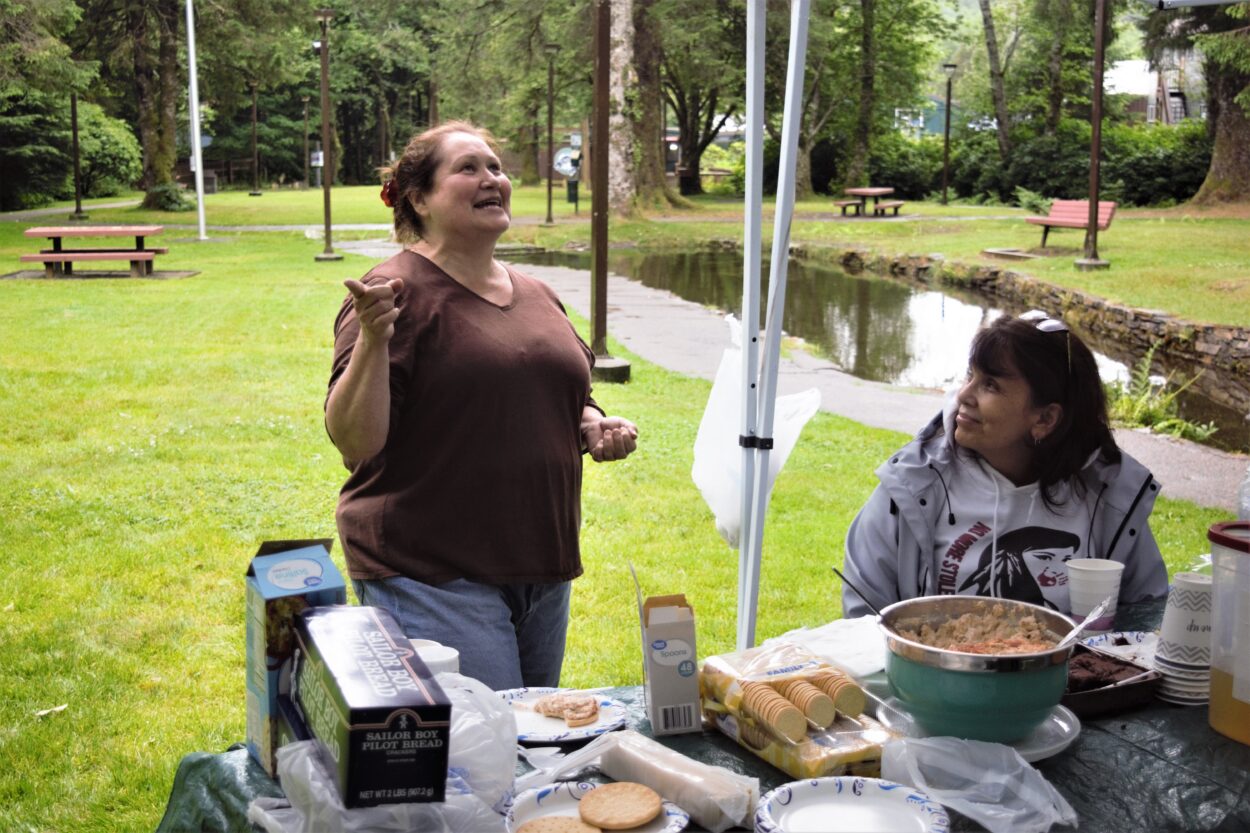 Terri Burr tells a migration route story as one of her students Sonya Klippert looks on. Burr started her summer Shmˈalgyack language class with Tsimshian history, before students were ever asked to make a sound. (Molly Lubbers/KRBD)

The Tsimshian language is endangered, with just a handful of fluent speakers in the U.S. But people interested in adding to that number can take a class for free this summer.

Rain or shine, Terri Burr is meeting with students every Tuesday and Thursday until August 12 to spread knowledge about the Tsimshian language — and culture.

She keeps the atmosphere fun, with her animated storytelling and teaching prompting giggles. That informality is intentional, Burr said. Sponsored by Ketchikan Indian Community, the class is free to the public, and you don’t need to be a tribal member to join.

“For the survival of our language, we need everyone in Ketchikan to care about our Indigenous languages,” Burr said. “…We invite the entire community to participate and be language warriors with us.”

This class is part of a larger effort to save Shmˈalgyack, she said — a long history of discrimination against Tsimshian people and their language has caused the number of speakers to rapidly fall. Though Burr explains this, she said she doesn’t want to be discouraging. What a gift, she told the class, for them to be learning now.

“The elders who were stubborn and managed to save language, managed to keep on preserving stories and and still practice, were very courageous,” she said. “In their day, they would have been ostracized.”

Today, Burr said only four people are fluent in the U.S. That makes classes like hers — where people can come to connect and be joyful — that much more important, she said.

To language learner Sonya Klippert, being in community with other Shmˈalgyack speakers means a lot. She’s proud of both her Raven Tsimshian and her Haida heritage, and said she was glad to connect with everyone there.

Burr said that’s what the class is all about. And as she constructed her lesson plans, she said she remembers what her elders taught her: to not treat Shm’algyack separate from Tsimshian culture.

So when she teaches, she starts with history. She told “Adaawck”  — ancient true tellings — and “Malshg” — tribal and family stories — to begin her class. Burr said she hopes many of the language learners will become teachers someday — and that they’ll pass on not just the language, but Tsimshian history, too.

One of those language learners is Rita Blandov. She’s Tsimshian, Haida and Yupik, but said that she wasn’t really allowed to grow up in her culture.

“People act like it happened a long time ago,” she said. “I just turned 40, and I get nervous sometimes just to even try to do anything cultural. So it’s kind of like saying: I’m still here, willing to learn.”

Blandov said the atmosphere of the class is incredibly healing. When she was young, her grandparents and great grandparents taught her some Shmˈalgyack. She can sometimes hear their voices echo behind Burr speaking, she said. And when she uses the language herself, she said she can feel it in her core.

“When you actually are a part of it, and taking part of it, and around it, it’s like you just feel it in your soul,” she said. “It’s like it ignites a spark that you didn’t even know was there.”

New language learners got to experience that for the first time this week. As Tuesday’s class finished, everyone learned how to introduce themselves. The space filled with students asking, “Naayu waan?” or “What is your name,” and answering with their names and “dee waayu.”

To end the class, Burr left students with a bigger question.

“When you go home, think about how long it’s been in your family since the walls in your house resonated with Shmˈalgyack in the air,” she said. “For some of us, maybe 50 years, 100 years. This is a really big step.”