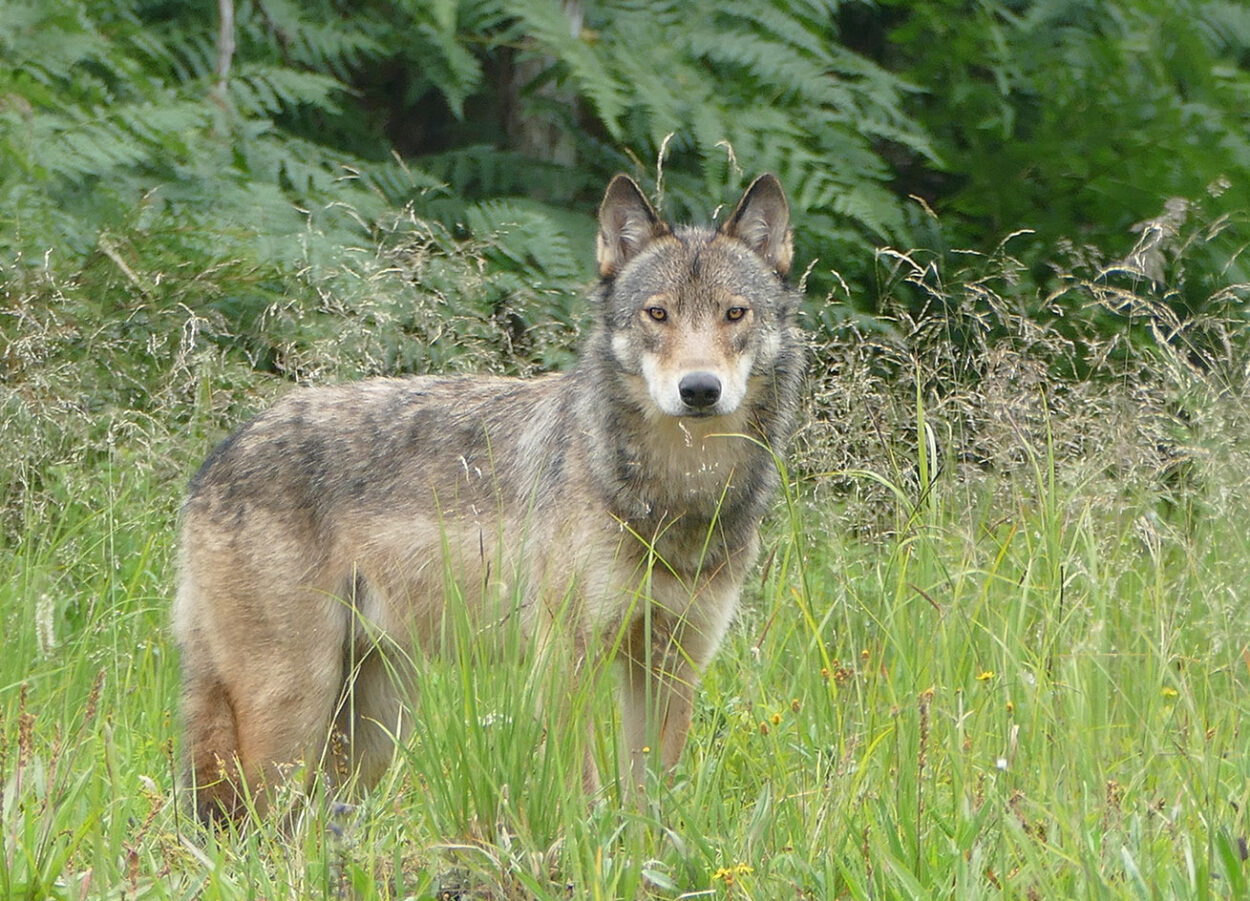 An Alaska Department of Fish and Game wildlife biologist came upon this Alexander Archipelago wolf on Prince of Wales Island in the summer of 2018. It had been sleeping. It woke up and moved away. (Photo by Kris Larson/ ADF&G)

A notice in the federal register published on Tuesday found merit to a conservationist coalition’s 111-page petition that says logging and road development, illegal and legal trapping and hunting, the effects of climate change and loss of genetic diversity were factors threatening Southeast Alaska’s Alexander Archipelago wolf population.

“It had substantial information to warrant us looking further at the species and whether it is warranted for listing or not,” she told CoastAlaska.

The agency in 2016 declined to list the species as threatened or endangered under the Endangered Species Act.

But the federal agency says that last year’s petition alleging threats to regional wolf populations from clear-cuts, aggressive hunting and trapping harvests and climate change have worsened since the last petition was filed a decade ago.

The federal government’s action will reignite a long-running controversy among Prince of Wales Island’s resident hunters and trappers who complain of a steep drop-off on the island’s deer population that’s commonly blamed on predation by wolves.

Sitka conservationist Larry Edwards of Alaska Rainforest Defenders, one of the co-authors of the petition, says the legacy of clear-cuts is to blame for loss of deer herds, not predators.

“The difficulty with deer on Prince of Wales Island, at heart, goes back to habitat loss,” he said, “which is cumulative over time from the logging of old growth forest and just the huge loss of that on that island.”

He says common sightings of wolves on Prince of Wales Island isn’t sound science and shouldn’t be used to prevent protections.

“That’s anecdotal information,” he said. “There are definitely threats to this population.”

“We don’t think that harvest represents a threat to this population now or in the immediate future,” he said in a phone interview. “We think we have enough controls in place to be able to manage that population for sustainability.”

He echoed concerns from island residents that federal protections for wolves would allow unchecked predation on deer, which are a key food source.

“Many local communities really depend upon deer to get them through the winter,” Vincent-Lang said. “If wolves are listed by the US Fish and Wildlife Service, the taking of wolves in directed hunting would be prohibited.”

Federal wildlife scientists are expected to release additional findings later this year. The annual hunting and trapping season traditionally runs in the winter.

A lawsuit filed on behalf of a conservationist earlier this year failed to halt last year’s season.

That case is scheduled to go to trial next spring.