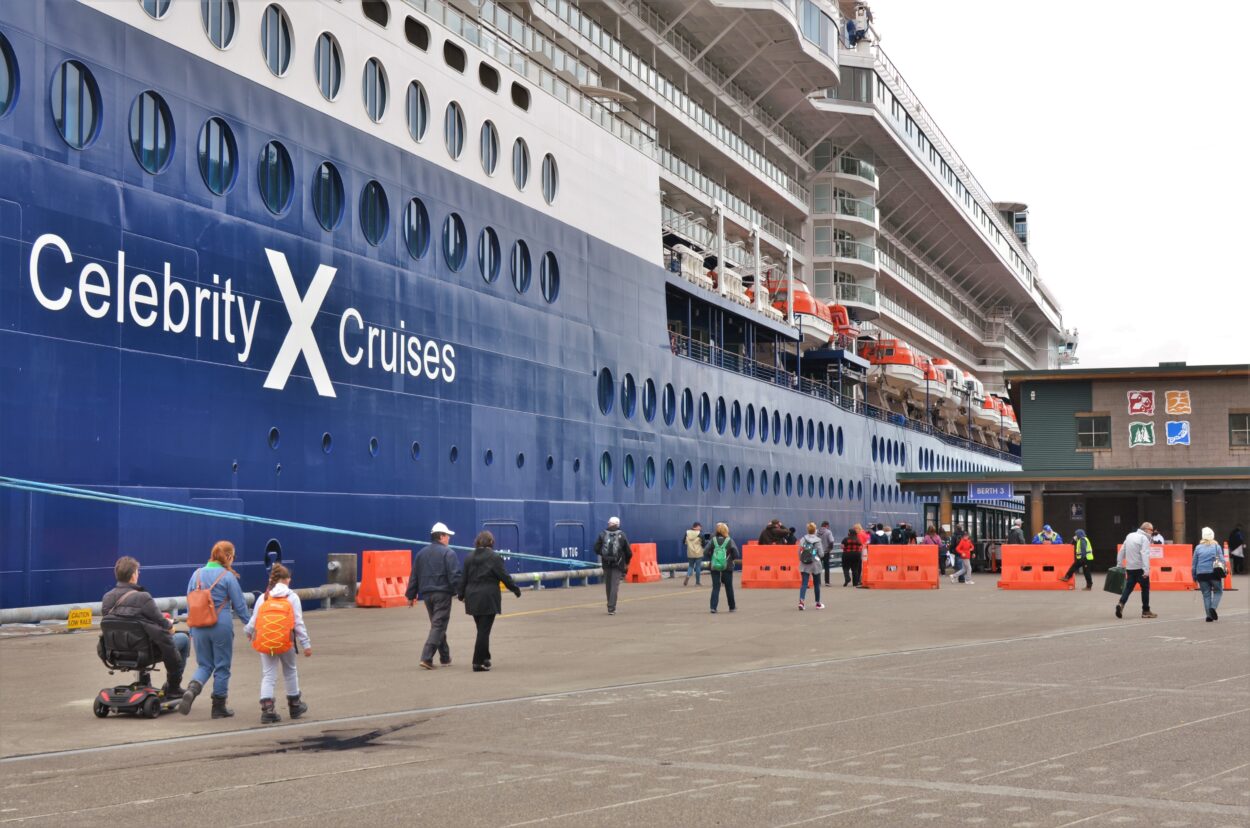 Passengers return to the Celebrity Millennium at Ketchikan’s Berth 3 on Sunday. (Eric Stone/KRBD)

Ketchikan’s 2021 cruise ship season is underway. Two large cruise ships tied up in the community over the weekend, and more are due later in the week.

And though news later broke of a COVID-19 case aboard the Celebrity Millennium, at a stop in Ketchikan, residents, visitors and business owners say they’re glad to see the economy getting a little bit closer to pre-pandemic normal.

Ketchikan’s downtown cruise ship docks aren’t as quiet as they once were. But the waterfront isn’t exactly buzzing.

Adrianna North was walking her blue heeler Zoe down the docks on Sunday. The Celebrity Millennium towered over the Tongass Trading Company Dock Store.

“It’s not crowded,” she said. “I was expecting it to be more crowded. But there’s only the one cruise ship, so it’s a little bit different. It’s kind of nice actually seeing different people. I like it.”

She says it’s nothing like the pre-pandemic crowds — and she likes it that way.

“A few years ago, I would take her walking and it was really crowded, like going through a maze,” she said. “But now it’s kind of nice, because there’s not so many people.”

The 1,300 or so passengers who came on the Millennium — about half the ship’s capacity — seem to be enjoying their trip to the Great Land.

“We love it!” said Corinn Murphy, a high school Earth science teacher from New York. “I’m looking forward to taking a look at glaciers live in person and taking pictures for my students for September.”

The cruise lines say 95% of the passengers are fully vaccinated. And that includes Murphy and her daughter Sara. She says the line has provided hand sanitizer, masks and plenty of space, so she’s not concerned about COVID-19.

And though downtown Ketchikan isn’t as packed as it was in 2019, Orca Jewels co-owner Ali Hussein says he’s just glad to see a thousand-foot vessel dominating the skyline.

“It’s a little more fun, and it gets you going,” he said. “I mean, I was excited to wake up this morning just to see that cruise ship! It was really, really pretty awesome.”

His business partner Tamarah Street, says it’s a different experience with so many fewer people in town.

“I’ve had a couple of the tourists say, ‘Oh, it’s not like it used to be because there’s hardly anybody on the ship, and there’s hardly anybody in town,’ and I’m almost like — that’s got to be kind of nice,” she said. “Even though we’re looking for full capacity, you’ve got to just appreciate it for what it is.”

She says she’s working on making the most of this short, low-volume cruise season.

Ketchikan is scheduled to round out this week with its first calls from Holland America and Princess ships. Another seven ships are scheduled to tie up in Ketchikan next week, including two on Sunday.