Clinic to begin offering urgent care, the first in Ketchikan to be open 7 days a week 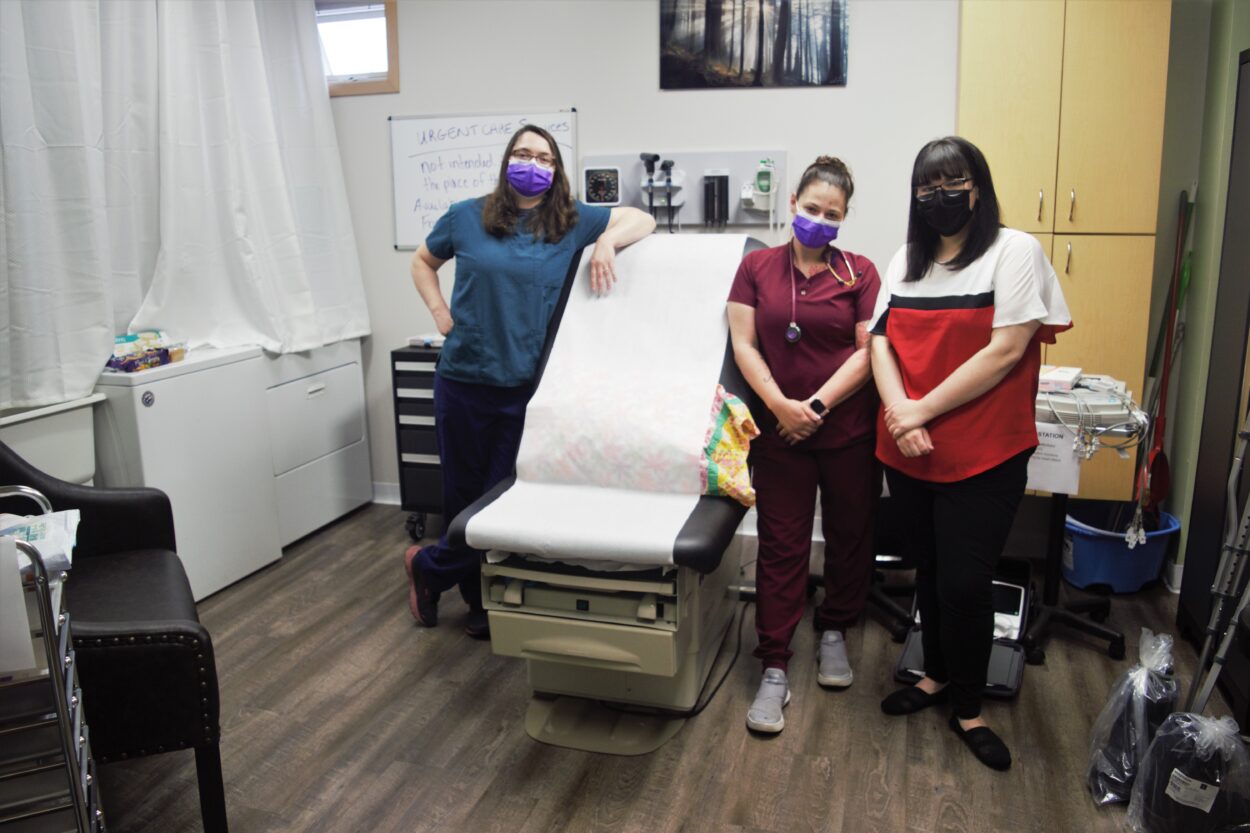 For years, it’s been difficult for Ketchikan residents to access same-day medical care after hours and on the weekends — that is, without having to make a trip to the emergency room. But that is changing with the opening of a daily urgent care clinic in town — and another potentially on the way.

When Power of Wellness Family Health Clinic opens its urgent care next week, it is thought to be the first time that one will be open all seven days a week and on holidays. Even before that, very few clinics in Ketchikan provided urgent care services at all.

Starting Monday, August 2, the clinic will remain open Monday through Friday, 8 a.m. to 6 p.m., and will also be open 10-4 p.m. both Saturday and Sunday.

Providing care all week is something she prioritized, said Power of Wellness founder Mandy Hulstine.

“Getting in for health care after hours, it’s difficult,” she said. “There’s usually only one option, and that’s the ER… I immediately recognized a need here in the area.”

Ketchikan resident Peter Epler knows that need well. A few months ago, he says his toddler got a cold and became dehydrated — but needed to get care over a weekend.

He said he would have much rather go to an urgent care rather than end up in the ER, especially considering the cost.

“We don’t want to be (at the ER) for that,” he said. “And they don’t want us there for that. They want the bays open for other folks. So to be able to have another solution is great.”

Like Epler said, some things can’t wait — but they’re also not meant for the ER. Instead, urgent care is for the medical needs that aren’t life-threatening, but require same-day care, Hulstine says. Think bronchitis, or a sprain, or a cut that needs stitches, she said.

Ketchikan residents may be familiar with same-day appointments or even walk-ins at some clinics, Hulstine said. But dedicated urgent care clinics aren’t just about allowing people to walk in and get help, said Hulstine — it’s also about what help a clinic can provide. So she stepped up Power of Wellness’ services, she said.

“What I mean by that is, for example, oxygen on site, being able to tell,  are you having a heart attack or not on site, specific medications that can be administered on site, having an AED on site,” she said. “To me, that’s accelerating it to the next level.” 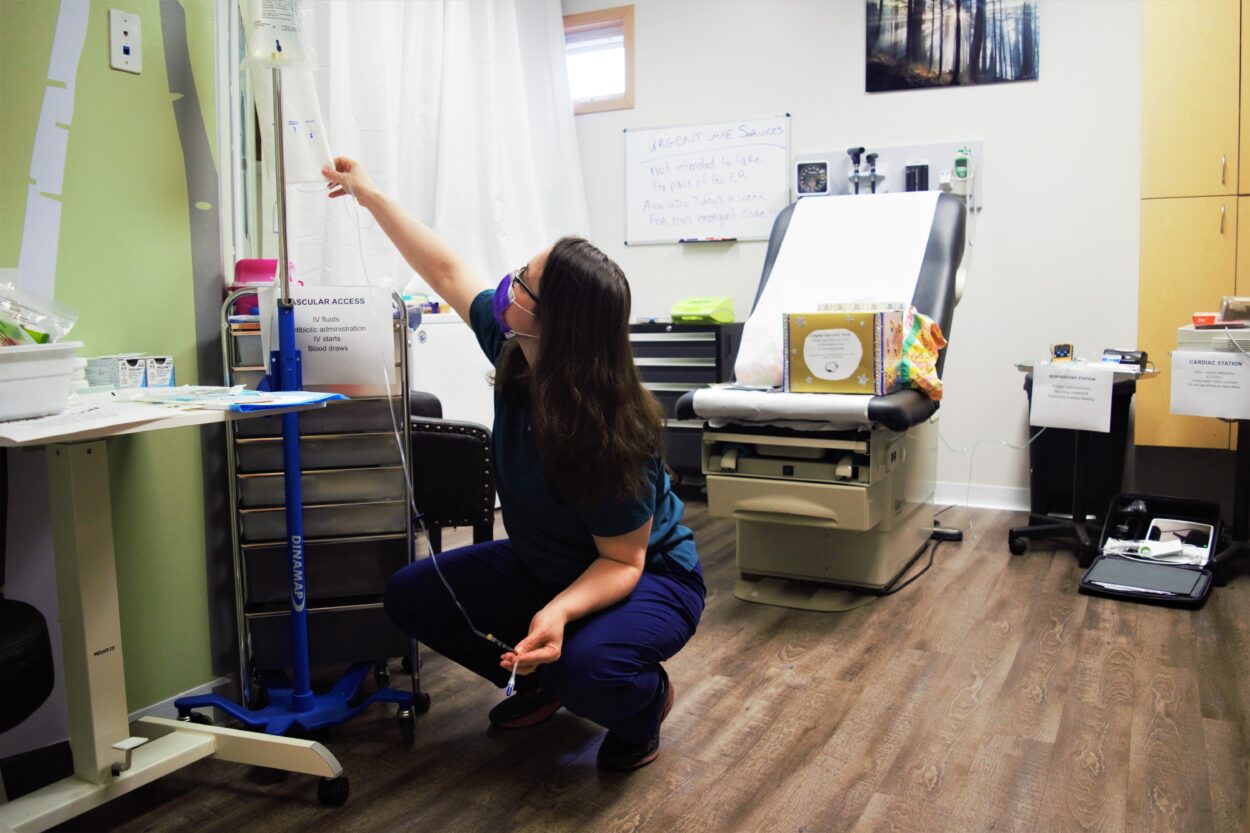 As Mandy Hulstine gives a tour of the urgent care suite, she shows some of the equipment available. Here, she shows an IV that can administer fluids to a patient. (Molly Lubbers/KRBD)

Hulstine said her staff can determine what’s life-threatening and what isn’t — and refer people to the ER when necessary. Everyone, including the receptionists, are also trained in CPR, she said.

Megan Beardsley,  the clinic lead and lab manager, said it’s been exciting to prepare for the urgent care opening.

“As a person who’s born and raised in Ketchikan and also as a person who’s raising two daughters in Ketchikan, to be able to serve a purpose to the community that’s done something for me is it’s more than words could could say,” she said. “I’m honored.”

With one year of work behind them, the time has come to launch. The date it’s opening, August 2, is significant, Hulstine said — it’s almost two years to the day she opened the practice.

“In medical, you’re always just go, go, go, go, go and hardly can you pee on a regular schedule, let alone come up for air, right,” she said. “When the dust kind of settles and you sit there and you think about it, I mean, I’ve been blown away.”

As Hulstine gears up, there may be more urgent care services coming to town. At its August 5 meeting, Ketchikan’s City Council will be voting on whether to approve PeaceHealth’s lease for the city-owned hospital. If that lease is approved, then the hospital will be required to open an urgent care center within the next two years — and that center will need to provide after-hours weekday and weekend care.

Dr. Peter Rice said that’s still in the early stages of planning, and that PeaceHealth is evaluating a number of urgent care models right now. But he said one major plus is that when patients need nonemergency services, urgent cares are cheaper.

“As we all know, the Emergency room itself is an expensive model, and it’s just by definition,” he said. “…So I think that’s appealing to everyone, conceptually, is to have an alternative on a Sunday afternoon for a minor problem to going into the emergency room itself.”

Hulstine says she’d be glad to see other urgent cares opening — that’s because she wants to make sure patients have the power to choose their care, she says.

What it comes down to, she said, is serving the need that she recognized in the first place. And she said she’ll be doing just that, every day of the week, starting August 2.