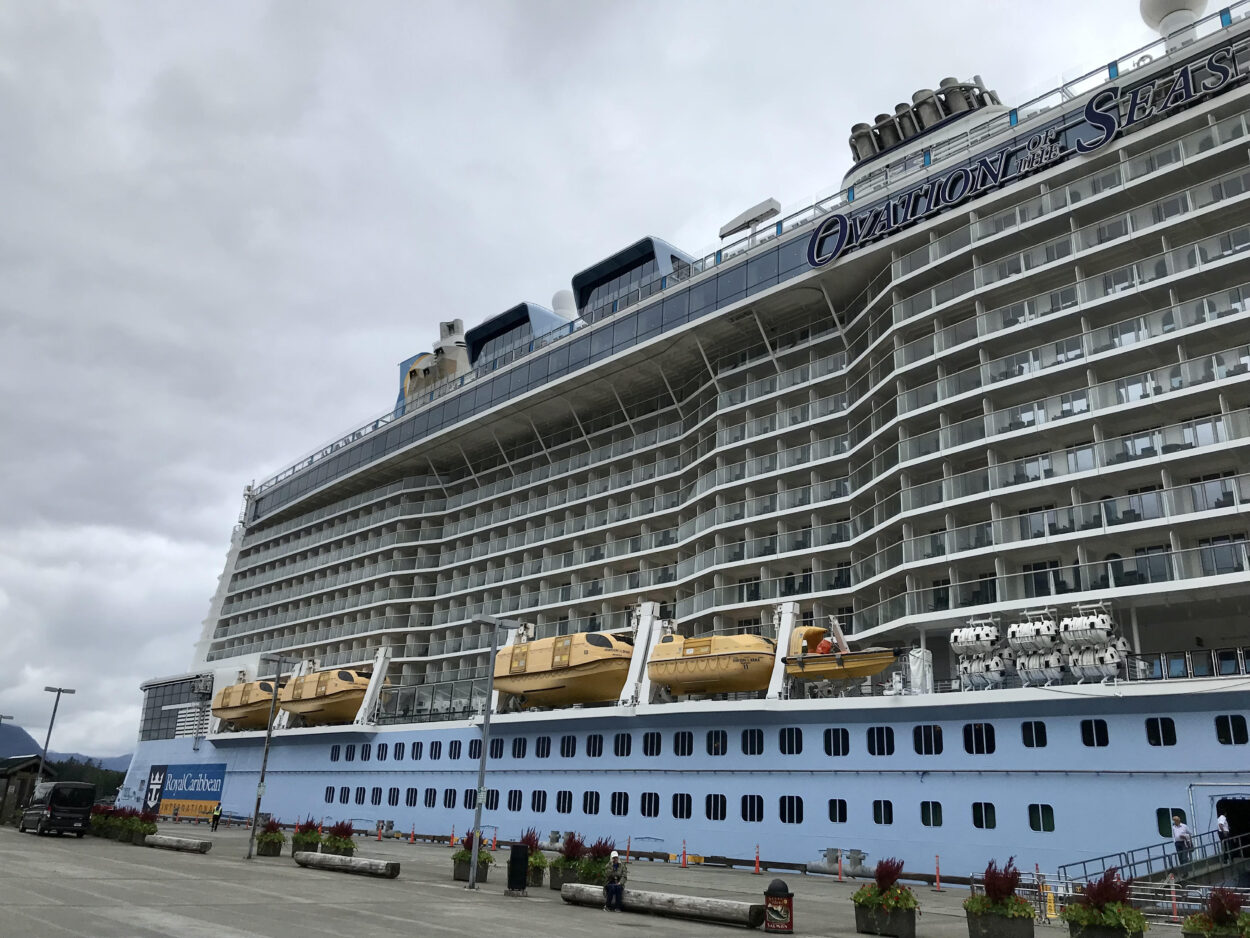 Ovation of the Seas docked in Berths 1 and 2 on August 2. It was the first time the massive ship has ever visited Ketchikan. (Molly Lubbers/KRBD).

For the first time ever, the largest cruise ship to visit Alaska has made its way to Ketchikan. As KRBD’s Molly Lubbers reports, the city had to put in a lot of work to host a ship of this size.

1,138 feet long and 136 feet wide, the Ovation of the Seas ship loomed over downtown Ketchikan when it docked at Berths 1 and 2. As the only cruise ship in town, there was plenty of space to accommodate its nearly 1,200-foot long profile.

Ketchikan Mayor Bob Sivertsen says its ability to easily fit is partially thanks to the sparse roster of cruise ships this year.

“It may be more difficult during a very, very busy season,” he said. “So the timing, and the placement of it is going to be even more of a challenge. But Ketchikan’s up to the challenge.”

Royal Caribbean Director of Destination Development Preston Carnahan said it took years of work and coordination to get a ship of this size here.

He said one major part of that was removing a navigational hazard in the Tongass Narrows. That meant blasting a rock pinnacle located near Berth 2.

“By removing that rock, it basically makes a much safer waterway,” he said. “And that was kind of in cooperation with everyone to bring bigger ships that have a deeper draft.”

The project finished up last year, but he said the pandemic halted any plans to send a ship of this class to Ketchikan. That is, until now. August 2 was the first time that the ship has docked in the city, and cruise director Dan Whitney says it’s also the ship’s first port call in Alaska since the pandemic started.

“It’s exciting to get back because you just didn’t know  when that was going to happen,” he said. “And for it to be happening now, i’s almost surreal.”

It’s not carrying paying passengers. This is a simulated voyage mandated by CDC guidelines. It’s a dry run of sorts to show that pandemic mitigation protocols can be applied. Typically, the Ovation of the Seas can fit more than 4,000 passengers, but just under 600 were on the ship this time, said Carnahan. And he said it won’t be stopping in Ketchikan again this season.

Carnahan said the preparation for this milestone is significant. It wasn’t just the most recent changes, he said, but a legacy of them.

“It doesn’t happen in a year and Ketchikan and Ketchikanites have adapted over the last say, five to 10 years to make this happen,” he said. “So this didn’t happen by accident.”

Ketchikan Mayor Bob Sivertsen said that the city will continue to adapt next year. There’s no word on when this specific cruise ship will be back, but the city is looking ahead to a fuller season in 2022. That’s not only if the pandemic eases, but also if more of these megaships come to town.