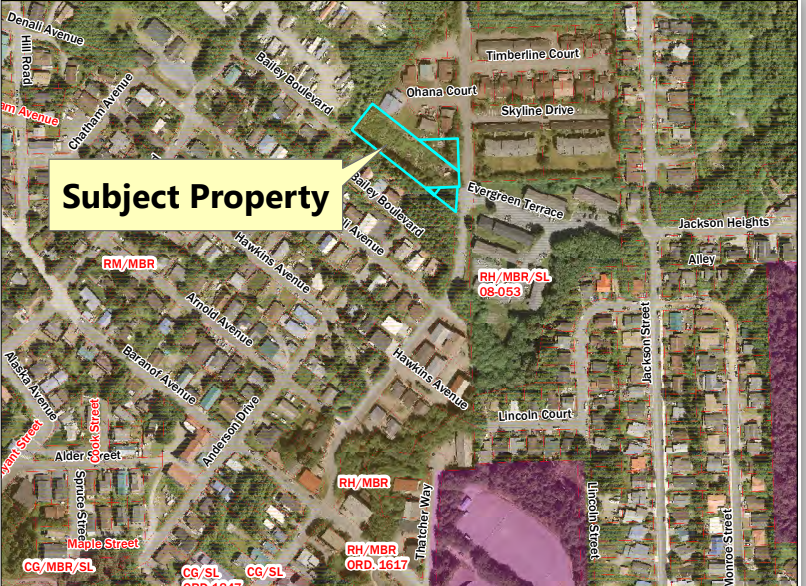 View of Charles Edwardson’s lot under consideration for rezone.

Charles Edwardson told Ketchikan’s Borough Assembly that he wants to build a self-storage complex in an empty lot next to his home on Carlanna Lake Road. But there’s one problem: The lot is zoned for medium and high-density housing. So he asked the assembly to rezone it for commercial use.

Though the borough’s appointed Planning Commission favors the change, career borough officials in the planning department oppose it. Richard Harney said that with an ongoing housing shortage in Ketchikan, the rezone doesn’t mesh with the assembly’s community development goals.

Harney says it would also interfere with additional housing being developed in the community.

Edwardson says he considered building tiny homes on the lot but infrastructure cost and permit requirement make it cost prohibitive.

“If I could do anything about it I would. But we can’t,” he said.

Edwardson says the housing shortage isn’t a problem he or other undeveloped property owners can solve without significant help.

“The municipalities have to figure out how it would be helpful to help us through the regulatory environment. Maybe a small business enhancement program for grants? Straight up grants. The infrastructure that could be developed to develop housing would enhance your current infrastructure that needs upgrading. Before that happens, people like me with land like that aren’t going to put housing up,” Edwardson said.

Edwardson says he would not consider selling the land or develop housing if the rezone is refused. Asked what he would do with the property…

Assembly member Judith McQuerry was conflicted because she wanted to see more housing, and because the planning commission and planning staff were not in agreement.

“I’m very seriously torn in all kinds of directions on this one. I believe that I’m going to vote ‘no,’” she said.

She was the lone vote against, as the rezone request passed 5-1 in first reading. Assembly member Felix Wong was absent from Monday’s meeting. The ordinance will be brought back for public hearing and a final vote at the Assembly’s September 7 meeting.

The Assembly also approved budgeting approximately $673,000 to raise staff salaries. Consultants with A.J. Gallagher & Co. in 2019 said the borough underpaid its workforce. Monday’s approval is the first step in implementing the consultants’ plan.

The Assembly also approved designating October 9, 2021 a borough sales tax holiday. That’s expected to be the weekend that Permanent Fund Dividends are distributed.