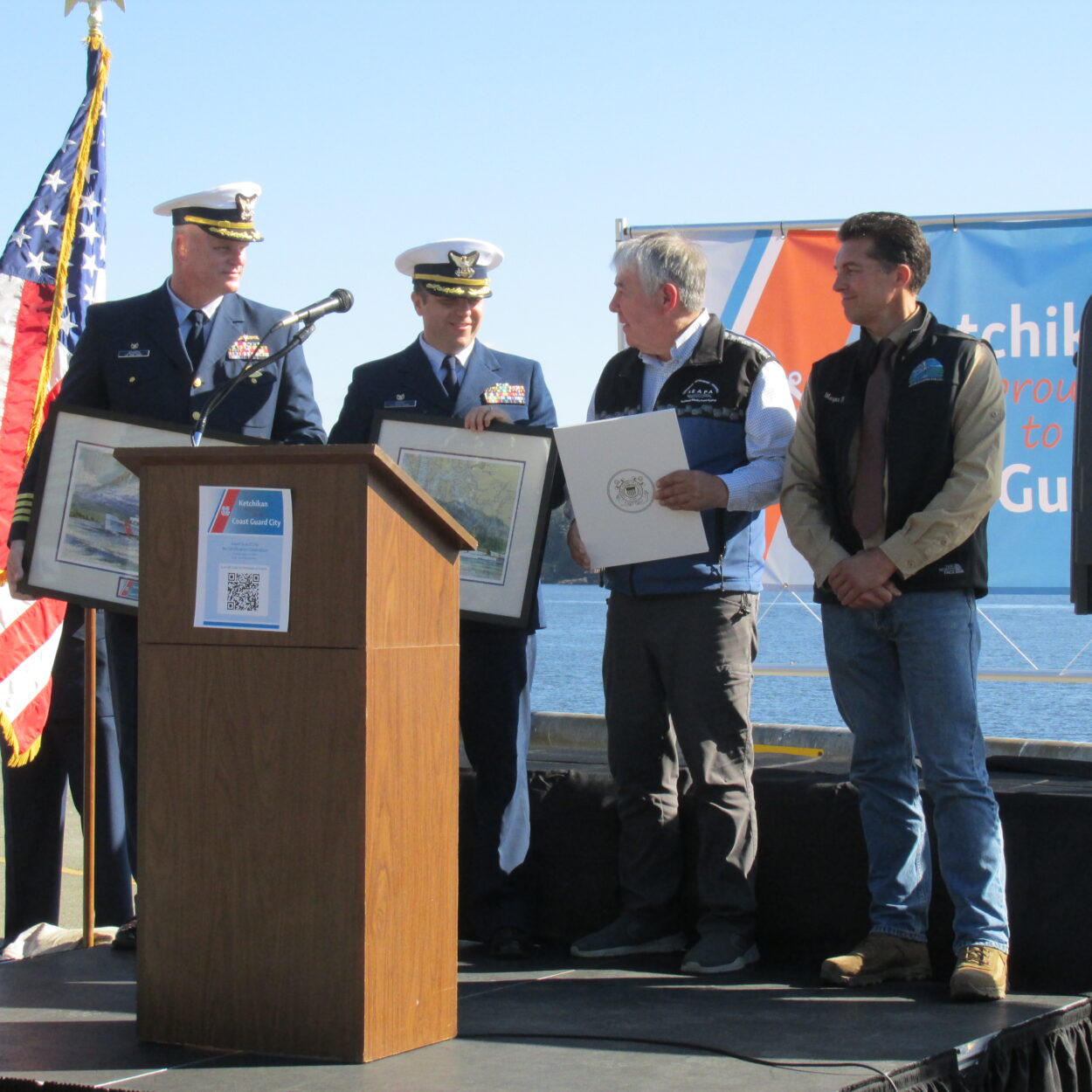 Ketchikan celebrated its recertification as a United States Coast Guard City on Tuesday. Local, state and national dignitaries attended a ceremony to mark the occasion.

It was a beautiful, sunny day as a crowd of about 100 people gathered at Ketchikan’s downtown cruise ship docks to celebrate the relationship between the city and Coast Guard members and their families. Assistant City Manager Lacey Simpson spoke briefly before introducing speakers.

“Ketchikan was first certified as a Coast Guard City in 2015, which was a tremendous honor for us. Today we join the other 29 communities throughout the nation that have also been designated. Including four communities in Alaska,” Simpson said.

The other four Alaska cities are Sitka, Cordova, Kodiak and Valdez.

Ketchikan city mayor Bob Sivertsen provided a history of the Coast Guard in Ketchikan, beginning with its predecessor, the U.S. Lighthouse Service which arrived in 1910.  Construction of Coast Guard Base Ketchikan began in 1919, and many of the original structures still remain. Today, the base is the regional hub for Southeast Alaska.

“They provide a variety of services to all the units in Juneau, Sitka, Petersburg and Ketchikan. And we should recognize the Coast Guard Auxiliary for all they do to support safety and safe boating. So I would like to thank the U.S. Coast Guard for their presence here in Ketchikan, and for being a valued sector of our community,” Sivertsen said. “We are very proud of you.” 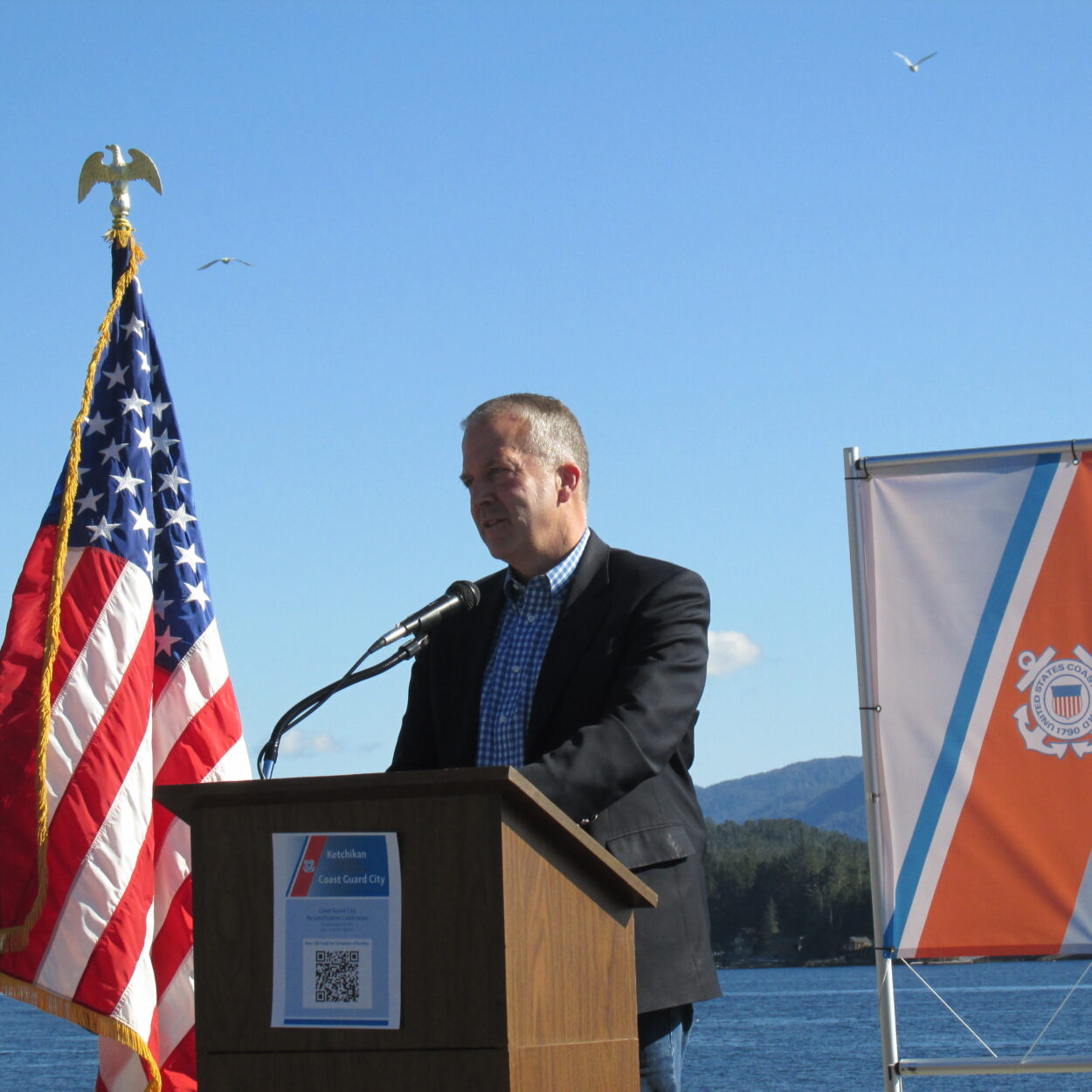 “It means that a community has made special efforts to acknowledge the professional work of the men and women and their families of the local Coast Guard base.  And it represents a mutual supporting relationship,” Dial said.

Ketchikan Base Commander Arthur Dehnz congratulated the community and presented a recertification proclamation signed by Commandant Karl L. Schultz. Dehnz reiterated that only 29 cities nationwide have received this designation.

“That’s truly just a testament to all the people here, that out of the hundreds and hundreds of cities that the Coast Guard is stationed in throughout the country, that you all have earned this designation here. And really that’s how welcome you’ve made the Coast Guard feel and how you’ve truly made us part of your family, and made this a home away from home,” Dehnz said.

U.S. Senator Dan Sullivan thanked military veterans for their service, noting that Alaska has more veterans per capita than any other state. He congratulated the city and borough for the recertification. He said he’d like to see a larger federal presence in Alaska, especially Southeast.

“…whether it’s more Coast Guard vessels. Whether it’s the Fairweather finally coming. Whether it’s Navy ships and the ability to build and repair them, which we have here. That’s a vision we are working on,” Sullivan said. “And it’s not a pie-in-the-sky vision. It is a vision that is actually happening right now. And I think this recertification with regard to Ketchikan is a testament to that vision. We’re going to work hard to make it happen. This is a really exciting day with regard to Ketchikan. So again to Ketchikan, to the Coast Guard, thank you both. Congratulations. I’m really honored to be able to celebrate on what is a picture-perfect day to commemorate this new, important recertification,” Sullivan said.

The Coast Guard has about 200 active duty members in Ketchikan along with about 100 additional family members living and working in the community.