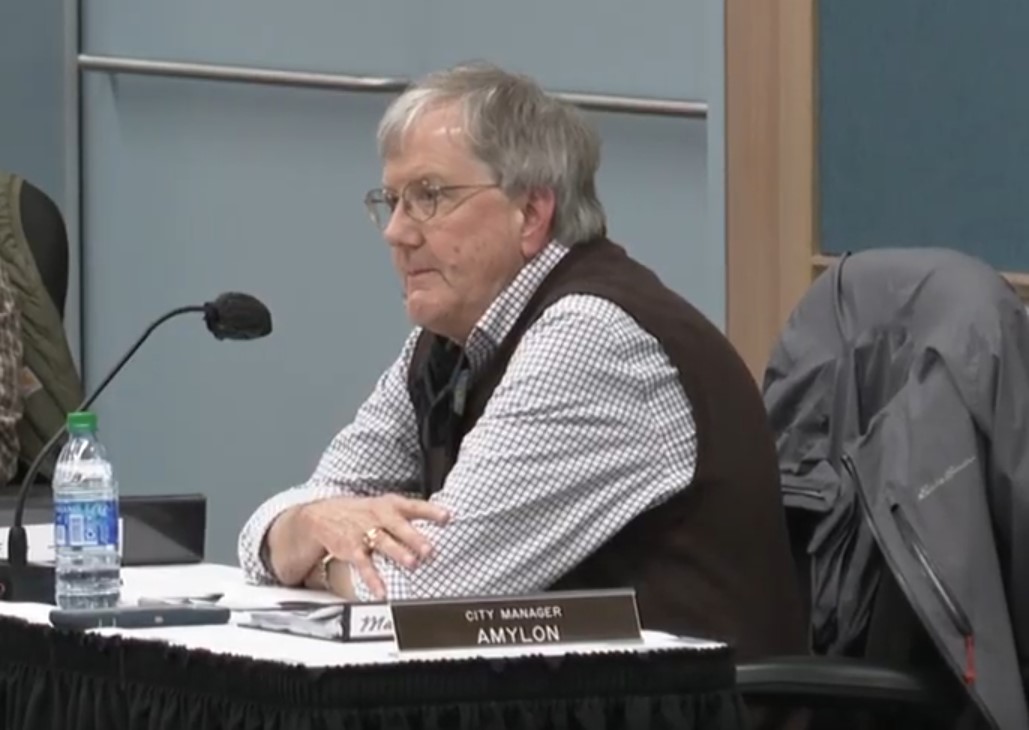 Karl Amylon listens during a City Council meeting on Sept. 24 2020. (Screenshot from City of Ketchikan video)

Ketchikan’s city manager is retiring after 26 years on the job. Karl Amylon, who heads up day-to-day operations for the City of Ketchikan and its publicly-owned utility, says he’s struggling with his health.

“Over the last several months I have been working with my local health care provider to address health care issues that have recently surfaced, which now will require my full-time attention and resources,” Amylon wrote in a memo to the council.

Amylon thanked his employees and the community.

“It has been my personal privilege to work for the City of Ketchikan and Ketchikan Public Utilities for the last twenty-six years. Never have I worked with a more qualified and talented group of employees. The community’s residents have been well served by their dedication and service during my tenure with the City and KPU,” Amylon wrote.

The exact date of Amylon’s retirement is uncertain. He says he’ll remain on sick leave until a date is finalized with the state’s public employee retirement system.

It’s the latest in a string of departures among senior city officials. Ketchikan’s police chief retired earlier this year, and the city’s fire chief says he’s planning to call it quits in mid-October. The finance director retired last year. The city’s port director left last year and has yet to be replaced.

Assistant City Manager Lacey Simpson has assumed Amylon’s role in an acting capacity, filling in for the manager at council meetings and heading up day-to-day operations. It’ll be up to the City Council to decide how to fill the manager’s position on a permanent basis. They’ll have a chance to discuss their next steps at a regular council meeting scheduled for Thursday.

In other business, the city is set to finalize on Thursday a $671,000 contract with Ketchikan-based PK Builders to expand and renovate a city-owned shelter on Park Avenue. The project is funded by COVID-19 relief money. It’ll add more than 1,000 square feet of shelter space in the former water warehouse, which now houses Ketchikan’s seasonal Overnight Warming Center. City officials say the renovations are a step towards making the low-barrier shelter a year-round service. It’ll require a majority vote to move forward.

Also Thursday, the City Council is set to recognize the efforts of Abner Hoage, the city’s retiring fire chief and emergency manager. He’ll be honored for his service leading the city’s COVID-19 response with a joint resolution from Ketchikan’s City Council, its Borough Assembly and the City Council in Saxman.

Finally, the city is set to discuss installing dashboard-mounted cameras in the city’s police vehicles. The city’s police cruisers currently don’t have dashcams — instead, officers are issued body-worn cameras. The acting police chief says that between the cameras, cellular service and data storage, it’d cost roughly $56,000 per year to outfit 20 vehicles.

Ketchikan’s City Council meets at 7 p.m. Thursday in the Ted Ferry Civic Center. The full agenda is available online. Members of the public have a chance to weigh in at the start of the meeting. The proceedings are broadcast on local cable channels and live-streamed at the city’s website.