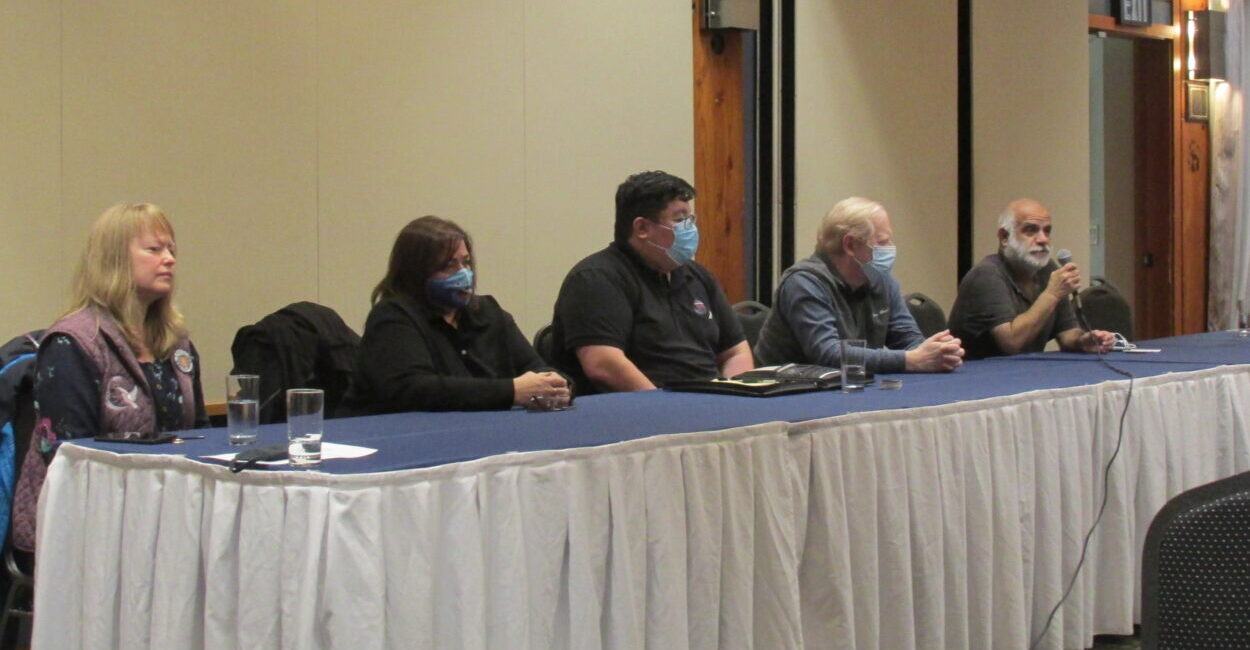 In the final Greater Ketchikan Chamber of Commerce forum of this election season, candidates for Ketchikan City Council shared their views on a variety of topics. Here are highlights. Audio from the entire, one-hour forum is posted at the end.

Candidates were asked what could be done to put the city on firmer financial footing.  Kistler said she would like to see the tourism shoulder season stretch out longer. One idea she suggested is marketing Ketchikan to attract adventure seekers.

“What if we had a ‘I survived the fall of Ketchikan.’ Where we had people doing a ‘drag a deer’ contest or sleeping out in the woods and catching slimy fish or whatever. I think you could have thrill seekers coming in from other places to prove that they survived.”

Mahtani said to sustain economic stability, the city should work with the cruise lines so ships stay in port longer.

Mahtani also said the city needs to support existing industries such as fishing and Ketchikan’s shipyard.

Olson said he’d like to expand industrial development in the area. He suggested looking into building a hydro-thermal processing plant.

“Hydro-thermal processing is a procedure where you super heat water to basically break down biomass and turn it into oil or gas or some other type of product that we could then use to sell. We could sell that down south. We could sell that to other communities. It breaks down the bio matter into its basic properties of petroleum.”

Gage said she believes more locals can and want to work remotely from home.

“That puts money in our economy. That diversifies our economics in the way that it actually builds up community members looking for work who don’t want to leave town but find themselves making that choice.”

Gage also feels mariculture and other cottage industries could be expanded upon.

Candidates were asked what they feel are the top concerns for existing businesses in Ketchikan and what ideas they have to make the downtown corridor more vibrant.

Gage said she would like to see the city attract more independent tourists, who don’t arrive on cruise ships.

Gage also would like to see more visitors coming via the Alaska Marine Highway, with the city advocating to make fares more affordable.

Kistler said she’d like to revamp the way the city taxes residential rent. Right now, renters pay a 6.5% sales tax on up to $1,000 in rent, so anyone whose rent exceeds $1,000 is required to pay a flat $65 monthly sales tax.

“If we want to put real estate at a lower sales tax and just put a straight-across-the-board percentage on that, it seems like it would be a better idea. It would really save on a lot of bookkeeping, not only for the businesses, but for the city itself.”

Kistler also said she’d like to see downtown businesses get together to decide what they want to do to revitalize the downtown area.

Olson said supporting businesses downtown in the summer and in the winter season are separate issues. In the summer, he suggested closing some downtown streets to accommodate foot traffic.

“Having the people be able to walk downtown and not get run over at the one stop light there, because everybody runs the red light. It doesn’t matter if it’s red or yellow or green. Maybe an opportunity would be to close off Mission Street so people can walk around and be able to walk down through Main Street and not have to worry about the cars between Mission and Main.”

For the winter season, Olson suggested having more restrooms open on the docks, even just a port-a-potty, and provide other amenities so locals can comfortably spend time downtown in the winter.

The candidates discussed a number of other topics, including whether Ketchikan can handle an increase in the number of cruise tourists, and whether the city manager and KPU manager positions should remain combined or separated.

And a quick disclosure – Jai Mahtani is a member of KRBD’s board of directors, which is not involved in news coverage.

Following is the audio from the entire, one-hour forum, moderated by chamber executive director Michelle O’Brien.  Also participating in the forum was Dave Kiffer who is running unopposed for city mayor. You can also find audio and Facebook links to KRBD’s forums with candidates for Assembly, City Council and School Board on our website posted under Station Highlights.