Ketchikan’s local elections are Tuesday. Here’s what’s on the ballot 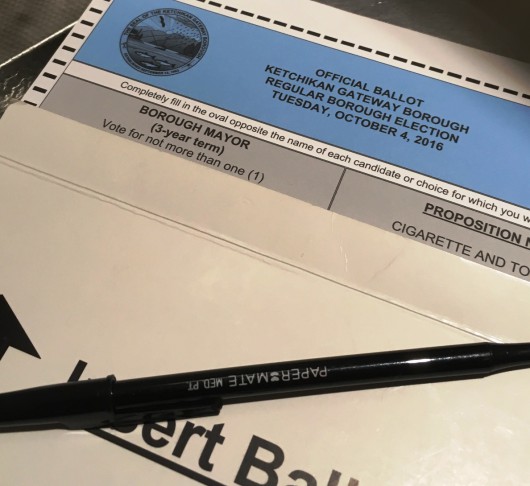 The ballot for the 2016 Ketchikan election. (Photo by Leila Kheiry)

Voters head to the polls for local elections across the state this Tuesday. Here’s a look at what’s on the ballot in the Ketchikan area.

Let’s start with an easy one: Ketchikan city mayor. City Council Member Dave Kiffer is unopposed in his bid. Barring unforeseen circumstances, the longtime Ketchikan elected official will take office as the city’s chief public advocate and the chair of the City Council later this month.

The top two vote-getters will get a three-year seat on Ketchikan’s City Council. Council Member Sam Bergeron is not seeking reelection. Only residents within Ketchikan city limits are eligible to vote in city elections.

Next, we’ll trot on over to Ketchikan’s White Cliff building for a look at some borough races, starting with Borough Assembly.

Also on Ketchikan voters’ ballots across the borough are two propositions. The first would extend a 5% special sales tax on marijuana approved by voters in 2017 indefinitely. The tax brings in between $75,000 and $100,000 per year, and it’s set to expire at the end of next year.

Most adults within the Ketchikan Gateway Borough — including residents of the cities of Ketchikan and Saxman — are eligible to vote for assembly, school board and the two propositions.

Voters throughout Ketchikan can cast ballots from 7 a.m. to 8 p.m. Tuesday, October 5 at seven precincts throughout the borough.

Editor’s note: Borough Assembly candidate Grant EchoHawk is also president of KRBD’s board of directors, which oversees the nonprofit organization. City Council candidate Jai Mahtani is also on KRBD’s board. They are not involved with news coverage.