Local elections: Most Ketchikan races too close to call, but ballot propositions appear to cruise to victory 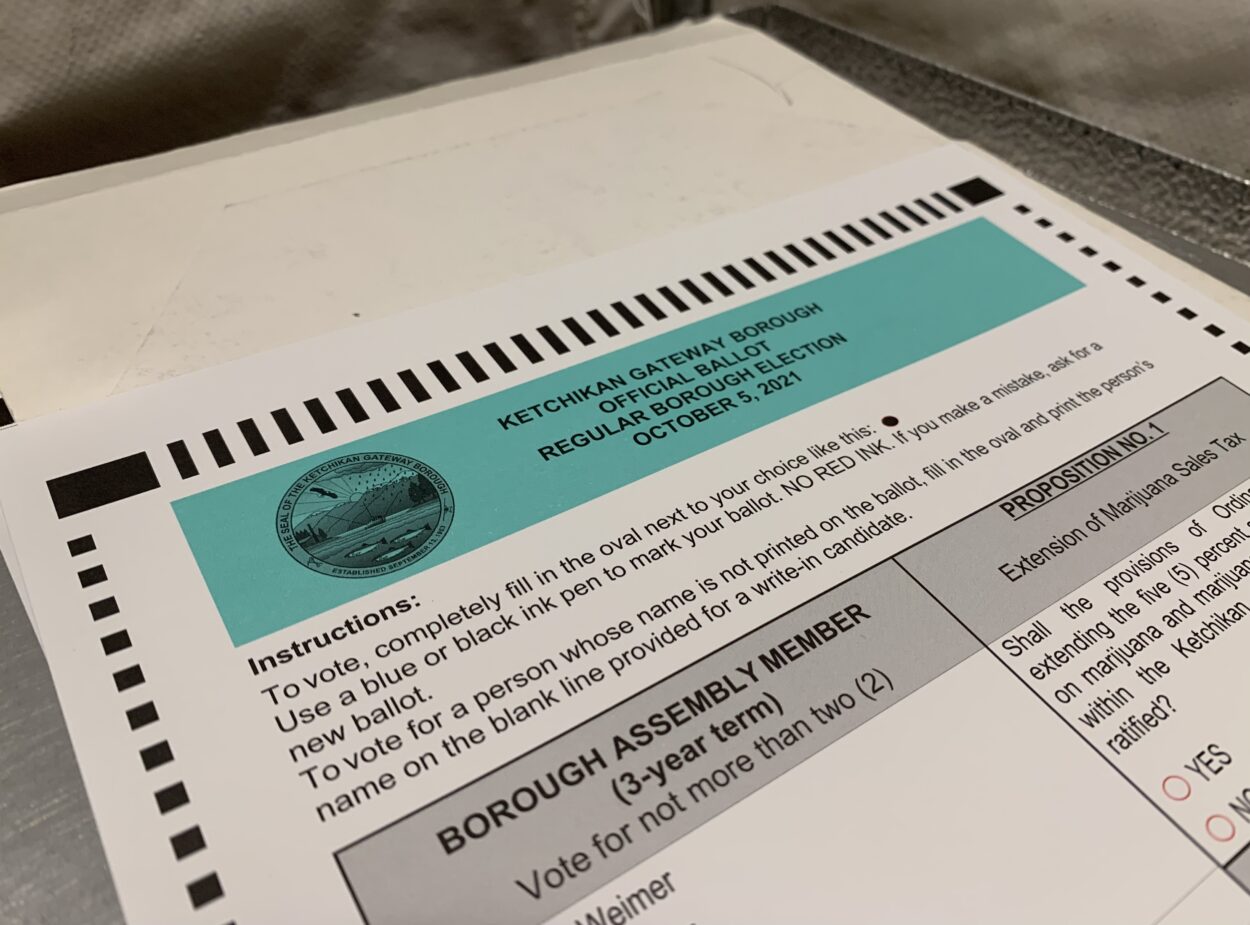 A ballot for the 2021 Ketchikan Gateway Borough election. Both ballot propositions look to have passed easily, but most races in Ketchikan’s city and borough are too close to call. (Eric Stone/KRBD)

A pair of ballot propositions that would extend a tax on pot and upgrade Ketchikan’s ball fields appear to have cruised to victory in local elections on Tuesday. And there’ll likely be some new faces on the City Council and Borough Assembly. But with hundreds of absentee and questioned ballots left to count, most races remain too close to call.

Both borough ballot measures appear to have passed easily with voters backing a nearly $6.7 million bond measure to upgrade baseball and softball fields with artificial turf. And an extension of the borough’s 5% sales tax on marijuana garnered strong support.

In the race for two seats on Ketchikan’s City Council, incumbent Janalee Gage leads in preliminary results. Jai Mahtani is just eight votes behind in second place. Lallette Kistler is in third. Write-in candidate Bronson Olson will likely finish fourth. The top two vote-getters will be seated on the City Council. But the field is tight: just over 50 votes separate first from third place with more than 200 votes left to count. The city’s canvass board is scheduled to count absentee, questioned and special needs ballots starting Thursday. 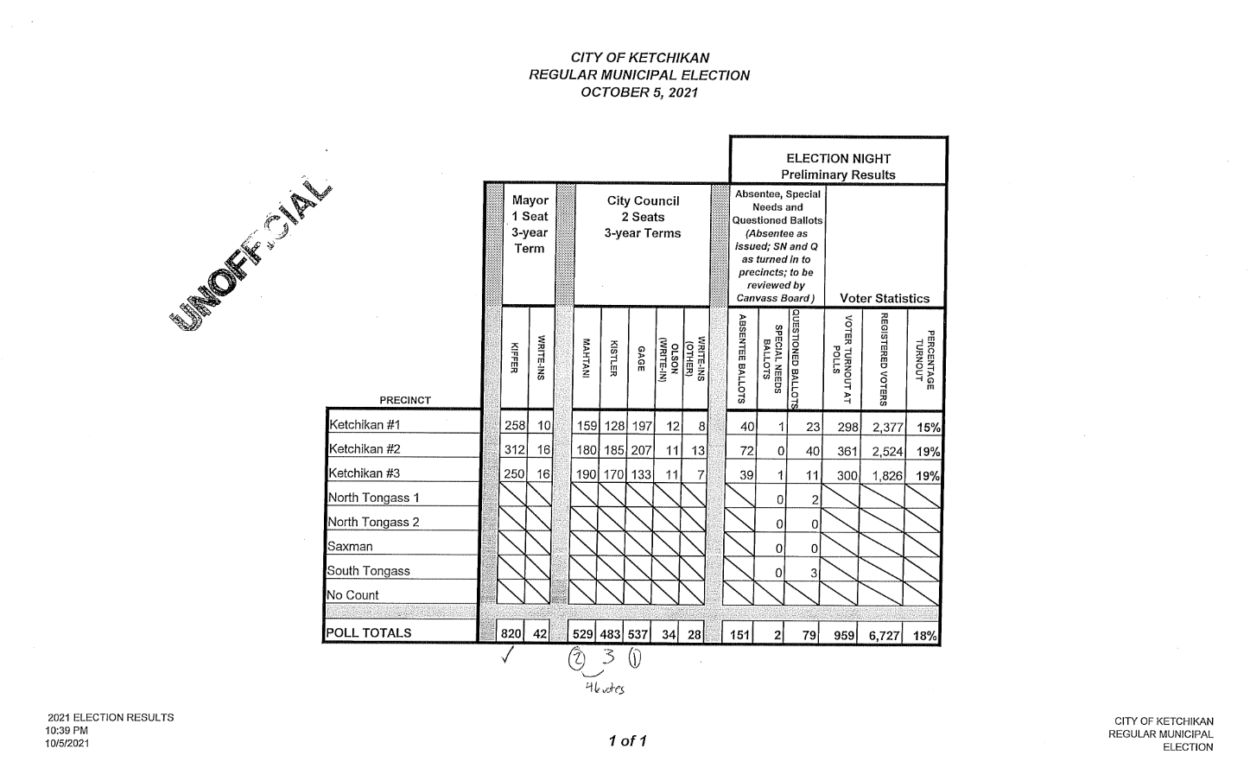 Dave Kiffer was unopposed in his bid for a three-year term as mayor. He has served in a variety of local elected offices and currently sits on Ketchikan’s City Council.

Two Ketchikan Gateway Borough Assembly seats were up for election this year. Jaimie Palmer leads, with Grant EchoHawk close behind. There’s a significant margin between EchoHawk and third-place Carlos Weimer, but for now, there’s still room to catch up. That’s because the borough’s canvass board has yet to count nearly 450 ballots. That process is set to begin Monday. 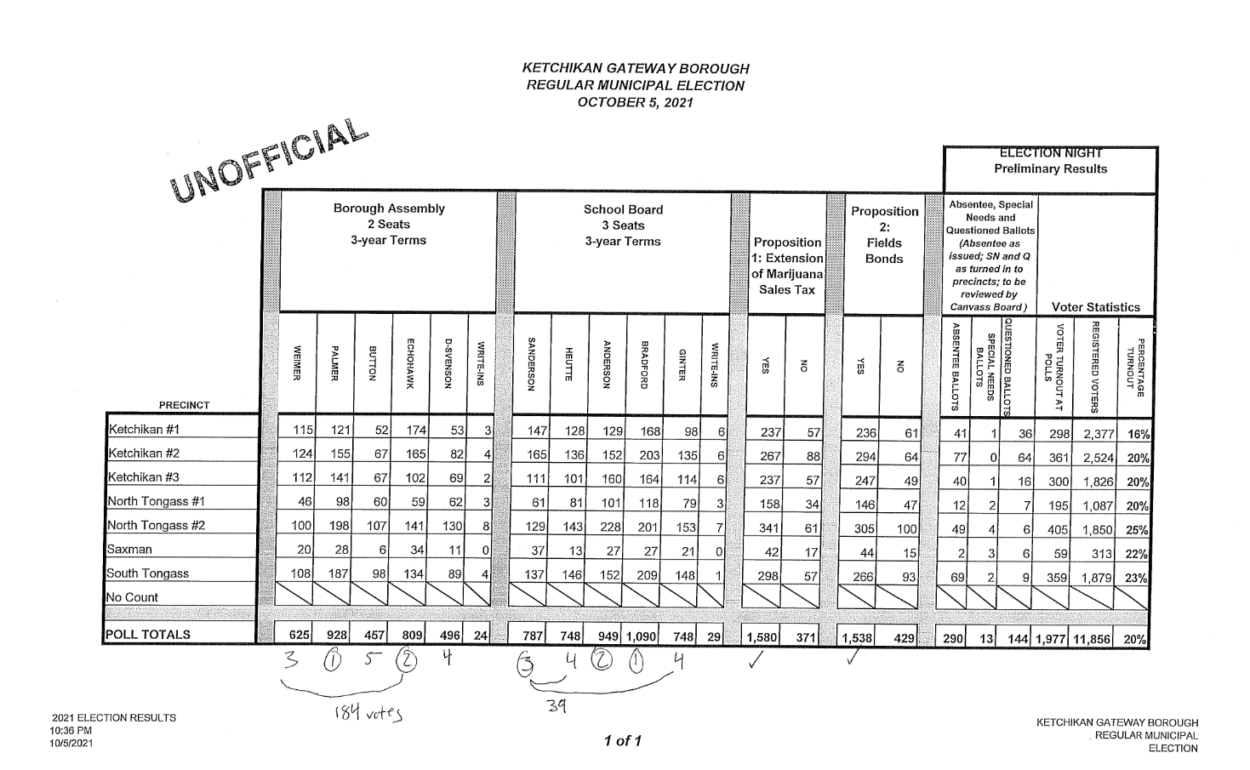 Voter turnout was low, with just 20% of registered voters casting ballots in the municipal election. After the remaining votes are counted, Ketchikan’s City Council and Borough Assembly are scheduled to certify the election Oct. 18 and 19, respectively.

And a note of disclosure: Grant EchoHawk and Jai Mahtani sit on the nonprofit board that oversees KRBD but are not involved with the newsroom.