Clear skies and a gust of solar wind should make for great aurora viewing in Southeast Alaska this weekend, forecasters say

In Southeast Alaska, even the sky is dressing up for Halloween. The National Weather Service predicts good aurora viewing opportunities across the panhandle this weekend.

Federal meteorologist Caleb Cravens says a flurry of charged particles is tracking towards Earth as clouds from a terrestrial storm over the Gulf of Alaska move out of the panhandle.

“So first off, the Space Weather Prediction Center has issued a G-3 geomagnetic storm watch, and that is in effect from October 30 through the 31st. We had a pretty large solar flare, and because of that, that is going to be giving us phenomenal aurora viewing conditions,” he said by phone Friday. “And it just so happens to be paired with clearing skies — which is pretty rare here in Southeast Alaska, that you get clear skies and the aurora.”

Skies are cloudy Friday evening, but Cravens says clouds should start clearing by Saturday night. It’s forecast to be mostly clear in Ketchikan and partly-to-mostly cloudy in the central and northern panhandle which means a better chance of seeing the northern lights.

“So Saturday night is going to be a little iffy on the viewing. It will be possible in some locations where the cloud cover can get out of there a little quicker,” he said. “But Sunday night is looking like the best night where we’re going to be pretty much clear across the entire panhandle. And that is when they’re also expecting some of the strongest auroras to be visible.” 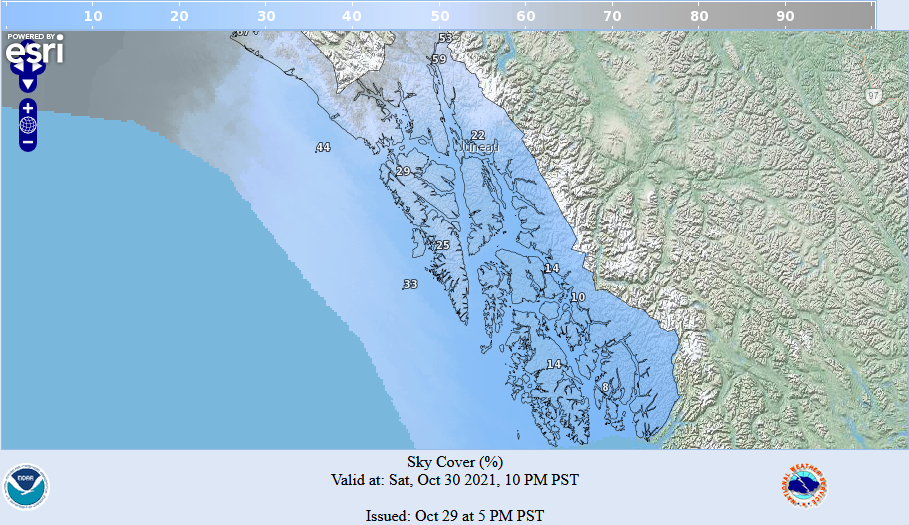 Cravens says the conditions on Halloween will make for one of the best aurora viewing opportunities so far this  year. He says the best views will be in areas with a clear view of the eastern and northern skies far away from city light pollution. But he says it’s also worth looking skyward no matter where in the panhandle you are.

“In this type of scenario, they’re going to be so strong that they’ll probably be overhead and it doesn’t really matter what direction you’re going to be having to look,” Cravens said.

Up-to-date aurora forecasts are available at the NOAA Space Weather Prediction Center and the University of Alaska Fairbanks’ Geophysical Institute.