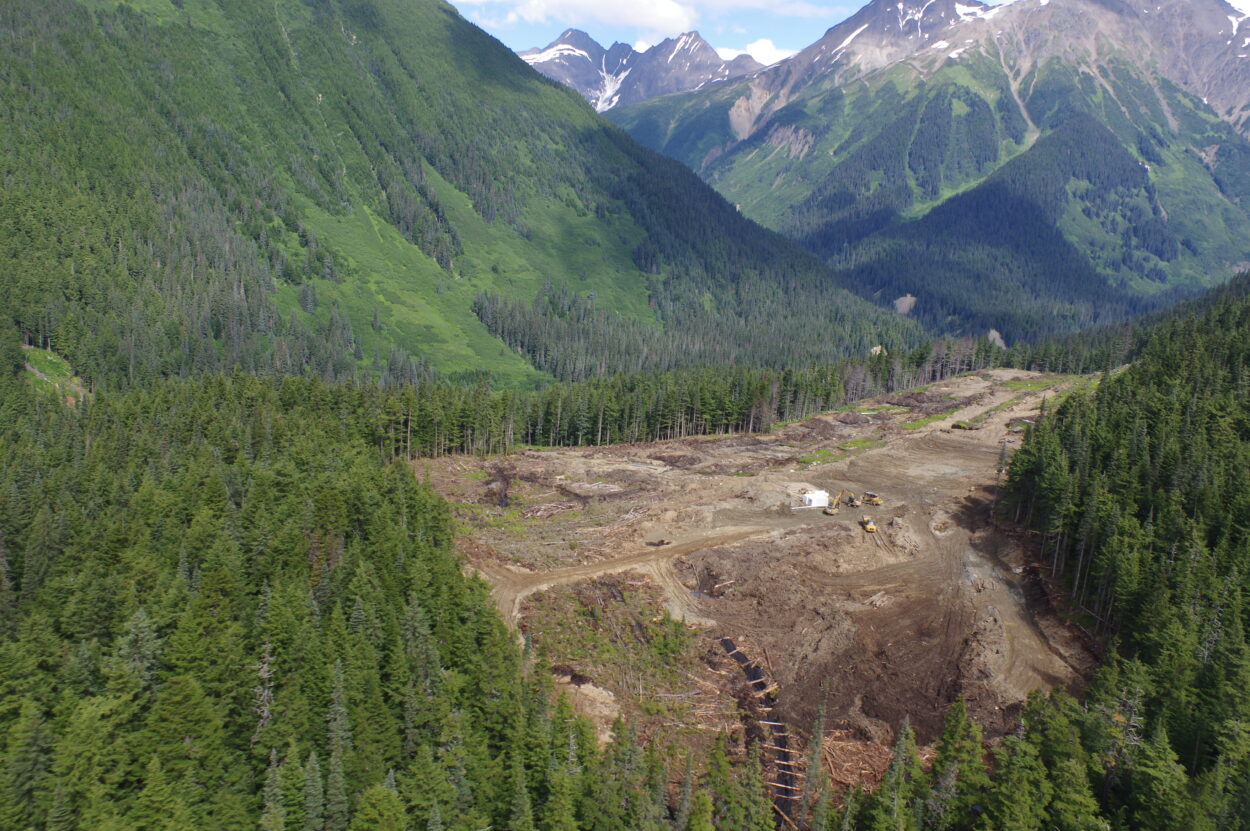 An aerial view of KSM’s Camp 9 on July 29, 2021. Crews worked to develop an access road and a mining camp during the summer of 2021. (Photo courtesy of Seabridge Gold)

Regulators in Canada have granted a two-year extension for the Kerr-Sulphurets-Mitchell mine’s environmental review which will effectively give the project’s owners until July 2026 to find major investors.

Critics of the Canadian mine say it could one day threaten Southeast Alaska salmon. But developers of the KSM haven’t found investors to pay for the project’s construction yet. Its location about 20 miles from the border has made it controversial for those who would live downstream from the metals mine.

KSM promises to be one of the largest open pit mining projects on the continent. But Toronto-based Seabridge Gold which owns the prospect has not found a major backer to build the gold, silver and copper mine.

British Columbia regulators gave tentative approval for KSM back in 2014. But with the caveat that it gets started in the next five years. But as that deadline approached the company applied and received an extension good through 2024.

Seabridge came back again last year saying it needed more time. In filings with provincial regulators, it said the COVID-19 pandemic’s travel restrictions prevented it from bringing potential investors to the remote site.

“COVID did have an impact without a doubt on our project and ultimately, based on our submission, the B.C. government agreed with that,” Seabridge executive Brent Murphy told CoastAlaska in an interview.

Seabridge is what’s known in the industry as a junior. It does exploratory work and pitches investors with the hopes of getting a deep-pocketed global firm as a partner with the wherewithal to develop a prospect into an actual mine.

“There’s still substantial interest in the project,” Murphy said. “Our ultimate goal is for the project to be joint venture with a major mining company.”

And it’s crucial for Seabridge for that to happen before its regulatory approval expires — hence its need for extensions.

Canadian mines built in watersheds that extend into the U.S. are controversial in Southeast Alaska. And KSM is no exception. Seabridge says waste from the mine would be stored in a watershed that drains into Canada. But the mine itself would be in the headwaters of the Unuk River, which flows out near Ketchikan.

Still, Murphy says the company is designing the project to minimize threats to fisheries and other resources.

“If you look at the report prepared by the BC government and the Canadian government, there is no predicted impacts on Alaskan waters,” Murphy said.

Transboundary mine critics in Southeast Alaska complain that B.C. regulators are allowing the permit to stay active based on an environmental review completed seven years ago. They say  Seabridge should have to redo some of its analysis and go back to the drawing board.

“It was kind of a troubling move by Seabridge, I think, to exploit the pandemic,” said Chris Zimmer, who works with Rivers Without Borders, a Juneau-based watchdog. “What’s more concerning to us here is that BC let them get away with it.”

His environmental nonprofit one of a number of campaign groups that says the B.C. government doesn’t do enough to regulate its mining industry.

“What I saw here is yet another part of a kind of a clear and disturbing history of deference to the industry,” Zimmer said.

He points to the Mount Polley Mine Disaster. In 2014, that mine’s tailings dam in B.C. failed, allowing millions of tons of liquid mine waste to escape uncontrolled into a watershed that drains into the Fraser River, which hosts one of Canada’s most treasured salmon runs.

Imperial Metals, the company that owned Mount Polley, was never fined or sanctioned.

“We’re very aware of the tailings ponds, concerns, i.e. Mount Polly, and the other unfortunate incidents that happened around the world,” Murphy said. “We are taking these concerns very seriously. And there are concerns held by both Canadian and American citizens and we’re working through those and we’re trying to be fully transparent on our design.”

B.C.’s Ministry of Environment and Climate Change Strategy declined to be interviewed. It referred back to the Environmental Assessment Office’s 27-page report it released granting another extension and its minister’s nine-page report outlining his rationale for the decision.

“I am of the view that an emergency variance that would allow for a certificate extension of two years for KSM would be in the public interest,” B.C.’s Environment and Climate Change Strategy Minister George Heyman wrote in his nine-page decision.

Alaska’s regulatory agencies were involved in KSM’s environmental review a decade ago. But none offered input over Seabridge’s request for more time on its permitting.

“This extension request does not change the project design or affect any potential downstream impacts,” Kyle Moselle, who heads up the Alaska Department of Natural Resource’s office of permitting for mines, wrote in an email to CoastAlaska.

KSM has been compared to the now-stalled Bristol Bay’s Pebble Project in its scale, wealth, job creation potential as well as environmental risk. That’s because like Pebble it would be an open pit design. Its mine waste would be held in a massive tailings pond — created by a dam more than 780 feet high — taller than the Hoover Dam.

But for that to happen Seabridge will need a major investor before its environmental assessment expires in 2026.