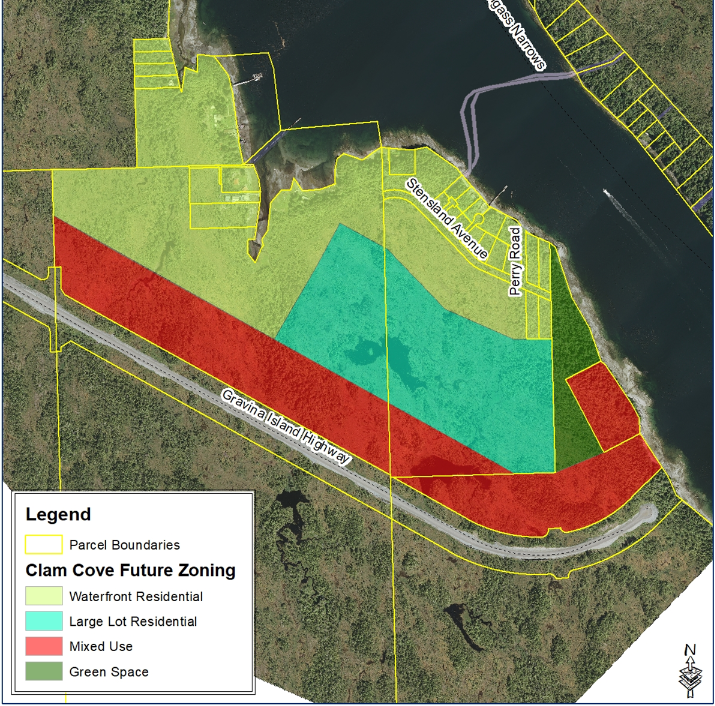 A map of proposed land uses under the Clam Cove Neighborhood Plan. The master plan, which borough officials recommend deferring until June, would not directly rezone the neighborhood but would help the planning department make future land use decisions. (Ketchikan Gateway Borough)

Ketchikan’s Borough Assembly on Monday will hold a work session to discuss a master plan for a largely residential hamlet on southern Gravina Island. But borough officials are recommending the assembly hold off on adopting the Clam Cove Neighborhood Plan to allow a new neighborhood association to weigh in.

The borough’s planning department received a request in 2019 to rezone a Clam Cove residential property to allow for commercial uses. But the Borough Assembly rejected the rezone, citing pushback from neighbors and the 2005 Gravina Island Plan. That document recommends adopting a cohesive plan for the neighborhood before considering one-off rezones. And none existed for Clam Cove at the time.

So borough officials say they kicked off the Clam Cove planning process with a series of public workshops where residents offered their input and developed a master plan.

The plan would create separate zones for smaller waterfront residential lots, larger interior home sites and a mixed commercial and residential area along the southern end of Gravina Island Highway. The nonbinding document would provide a reference for future land use decisions like rezones. The borough’s planning commission okayed the Clam Cove plan in October and forwarded it to the assembly for final approval.

But since that October meeting, borough officials say some residents have formed a new neighborhood group. Now, borough officials are asking the assembly to give the new Clam Cove Residents Association until June to provide input and help the planning department fine-tune the plan.

In other business, the assembly is slated to approve bargaining agreements with two unions – The International Brotherhood of Electrical Workers Local 1547 and the International Organization of Masters, Mates and Pilots. Both unions’ contracts expire later this month.

Under both proposed three-year contracts unionized workers would get annual cost-of-living raises and a day off for Martin Luther King, Jr.’s birthday.

The assembly could choose discuss the agreements in closed session. The borough is also negotiating with the Alaska Public Employees Association and the Inlandboatmen’s Union of the Pacific.

Ketchikan’s Borough Assembly meets at 5:30 p.m. Monday in the White Cliff Building. Members of the public can weigh in at the beginning of the meeting. The full agenda is available at the borough’s website, where the meeting is also live-streamed. It’s also available on local cable channels.