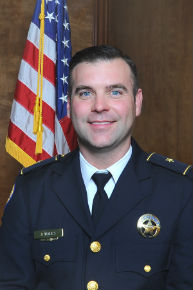 City officials in Ketchikan are considering a New Orleans police commander as Ketchikan’s next police chief. Ketchikan’s City Council will be asked Thursday to approve the city manager’s recommendation to make an offer.

The job’s been open since Joe White, Ketchikan’s police chief of four years, retired in June.

A hiring committee has forwarded its top choice out of 31 candidates to the city council, including three Ketchikan police officers who had applied for the top job. Acting City Manager Lacey Simpson wrote in a memo that New Orleans police Cmdr. Jeffrey Walls had the “experience, community approach and mentorship philosophy” that would make him an asset in Ketchikan.

Walls is a 24-year veteran of the New Orleans Police Department who’s served as a commander for a decade. He currently oversees the 8th District of New Orleans, including the French Quarter, and says in his job application that he’s deeply involved in community groups in the area. He says he’s promoted an initiative called “Ethical Policing Is Courageous” that encourages officers to step in and prevent wrongdoing by their colleagues.

“I have been instrumental in establishing police behaviors that build positive community relations through constitutional policing,” Walls wrote.

Walls wrote in his job application that he’s “always loved the idea of moving to Alaska.” He says he grew up in a small town in Alabama and misses the feel of a tight-knit community.

Walls’ tenure in New Orleans has not been without controversy. The city of New Orleans paid $200,000 to the family of a Black man he and two other officers shot and killed after he reportedly threatened them with a knife in 2005. The man’s family sued in federal court and the case was settled by the city in 2011, according to the New Orleans Advocate.

But he’s also been decorated in his law enforcement career. He  listed 20 commendations and special recognitions he’s received from the New Orleans Police Department.

Walls would be the first outside hire for Ketchikan police chief in more than a decade. The previous two chiefs, Joe White and Alan Bengaard, were internal candidates. The last outside hire was Ed Talik, who was hired as chief in 2008 after leaving a job in Maryland.

The police chief is typically hired without input from the city council. But because Walls’ salary offer of $132,000 and 19 days of paid vacation exceeds the city’s salary cap, it must be approved by elected leaders.  If approved, he could be hired as soon as February.

In other business, the city is asking the state for $17 million to make up for a 24% drop in city revenue in 2020 it blames on 2020’s aborted cruise season. The council will be asked Thursday to confirm the application for a share of Alaska’s $50 million in federal American Rescue Plan relief for municipalities. Officials say it will be some time before they find out how much Ketchikan will receive.

Ketchikan’s City Council meets at 7 p.m. Thursday in its chambers at City Hall. The full agenda is available online. The meeting is broadcast on local cable channels and live-streamed at the city’s website.