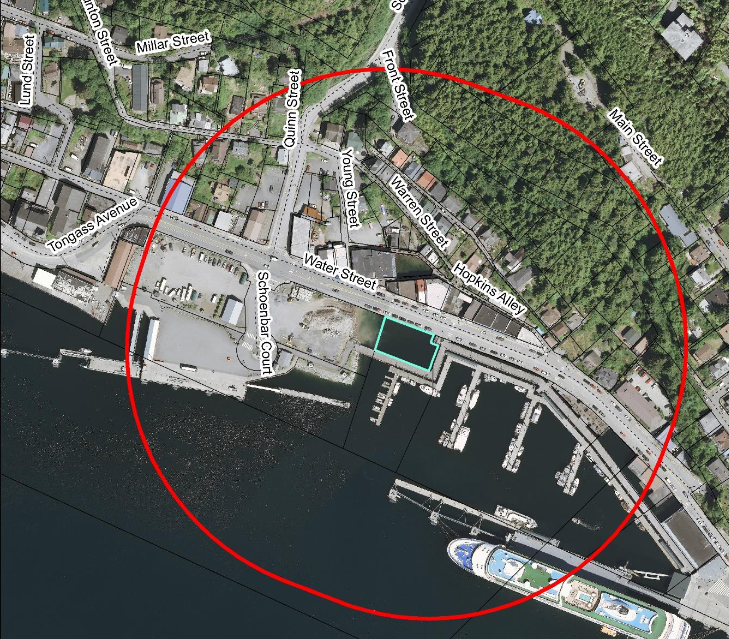 An aerial view of the Water Street lot that’s up for rezoning, outlined in blue. Property owners within the red circle were invited to provide feedback on the rezoning proposal. (Ketchikan Gateway Borough)

Ketchikan’s downtown waterfront could see a new addition this winter. A developer is asking Ketchikan’s Borough Assembly to rezone a quarter-acre vacant lot along the waterfront promenade for a mix of housing and shops.

But already at least one neighbor has expressed concern, as there would be no height restrictions — meaning the sky’s the limit for a potential new downtown building.

The request comes from K&B Real Estate. It’s a Puerto Rico-based company owned by Rajesh and Mahesh Khemlani, who own Infinity Jewelry in downtown Ketchikan, according to state records. The pair also co-own a company called Amrapur, which owns a couple other downtown Ketchikan properties.

The borough’s planning director, Richard Harney, explained that K&B was looking to build housing, which isn’t currently allowed due to the zoning regulations.

“What they wanted to build on the property, which includes residential uses, are not permitted in the heavy industrial zone. That was the primary reason they’re coming forward with this rezone at this time,” Harney said.

Harney said nearby property owners had been notified and so far only one critical note came back from a neighbor concerned about their view of the waterfront.

Aretha Hayward, a consultant representing the owners, told the assembly the owners have pledged the new building would blend in with Ketchikan’s historic Newtown and not block people’s views. So far, they haven’t submitted any sketches or designs to the assembly. She said the owners had already gotten approval from the Army Corps of Engineers to drive pilings to support a building. She said plans for the property were in the early stages, but the owners envisioned a building with businesses on the ground floor and apartments above. She said they hoped to finish up construction by the start of the 2022 cruise season.

But Harney reminded the assembly that once it’s rezoned, the assembly will have limited review powers over the development.

Assembly members unanimously approved the rezoning request on first reading. Judith McQuerry says neighbors or others with questions still have time to give their feedback when it comes up for a public hearing.

“My hope is that this will bring forth the residents from around and abouts that may not have responded to the postcard sent by the Planning Department. But once they’re faced with a possible building with zero height restrictions, we might hear from more people with a concern,” McQuerry said.

It’ll be back for a final vote at the assembly’s next meeting on Jan. 3.