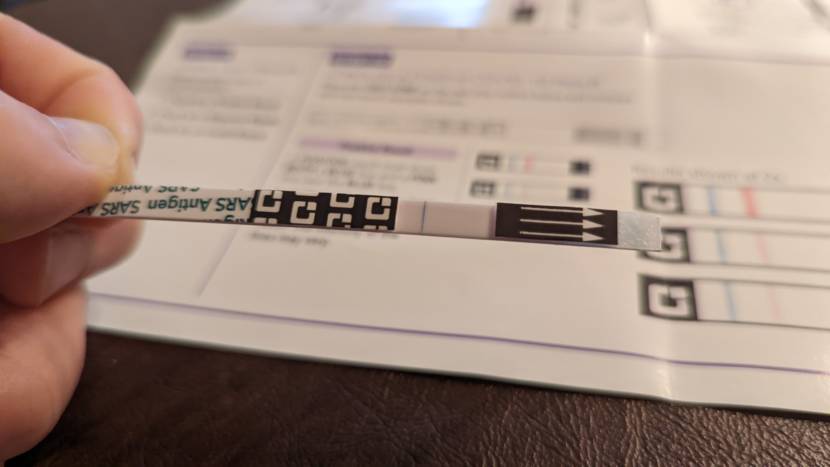 A single blue stripe on a strip from a QuickVue At-Home OTC COVID-19 Test kit indicates that no proteins from the virus that causes COVID-19 were detected in a swab taken from someone’s nostrils. (Photo illustration by Jeremy Hsieh/KTOO)

Ketchikan is almost out of at-home rapid COVID-19 test kits.

The fire department started handing out free at-home kits provided by the state on Dec. 13 in an effort to help residents avoid spreading the disease, but acting Ketchikan Fire Chief Scott Brainard says they’ve distributed just about their entire lot of 2,790 kits.

“We’ve put in a request for more home test kits for the public, and we are basically just having to wait for them to arrive,” Brainard said Tuesday by phone.

He says he’s put in an order for 864 additional kits. He says state officials told him they hoped to get more shipped to Ketchikan next week.

Officials at the North Tongass Volunteer Fire Department said Tuesday they are also out of kits. The South Tongass Fire Department had just a handful as of Tuesday morning. The Ketchikan Public Library had about a dozen on hand Tuesday afternoon.

Ketchikan Public Health Center had just shy of two dozen test kits as of midday Tuesday. The lead nurse, Jen Bergen, told KRBD the clinic had ordered more but wasn’t sure when they’d be delivered.

Officials in Wrangell told public radio station KSTK Tuesday that the community had nearly exhausted its supply of test kits as well.

Test kits are generally limited to two per household.