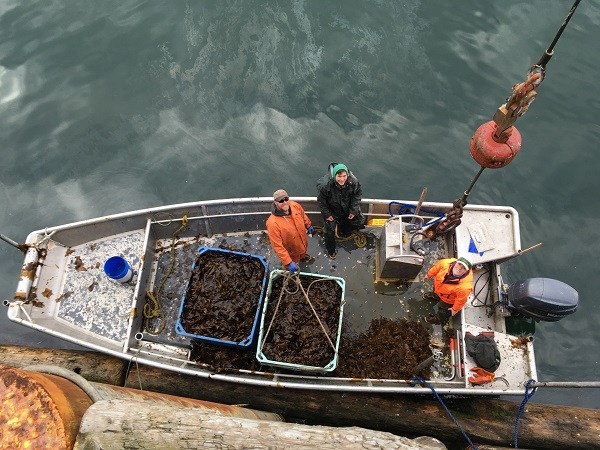 Southeast’s seaweed and shellfish industry is in line to receive a boost from the feds. The U.S. Department of Agriculture announced Thursday it would provide $500,000 in funding to draw up plans for a new mariculture processing facility on Prince of Wales Island. Producers and processors are welcoming the news.

USDA Undersecretary for Rural Development Xochitl Torres Small says the initiative goes hand-in-hand with the Biden administration’s plans for new economic opportunity in an area that’s been in transition as the timber industry shrinks.

“It’s a great opportunity for economic diversification,” Torres Small said in a phone interview Friday. “And one of the things I love about this project is it really is driven by partners on the ground.”

She credits Southeast Conference, a regional civic and industry group, with the idea. Executive Director Robert Venables says the investment will go to good use.

“One of the things we’re trying to do is help support the industry and identify what their needs are, and it’s come to the forefront that a facility can help especially the smaller entities have a place to do processing, storage, shipping, aggregating, any number of things, but they don’t have the means to do their own individual construction of facilities.

Venables says the idea is to create a co-op facility that would be shared by a number of mariculture firms.

“We’re like a craft seafood cannery,” he said by phone Friday.

Scaletta says Wildfish isn’t canning mariculture products at the moment, but they’re looking to get into the sector.

“We are hoping to be a value-added producer for mariculture products. Part of our business plan going into the future is to work more of these products into our lineup,” he said.

It’s all very preliminary, but Scaletta says he could see his company adding five to 10 jobs by expanding their business to the new facility.

Markos Scheer runs Seagrove Kelp, a mariculture outfit with a nursery in Ketchikan and a seaweed farm on the west side of Prince of Wales Island. He also chairs Southeast Conference’s Seafood and Maritime Committee.

“I think this is really an exciting time for mariculture in Alaska and the development of sustainable, non-extractive economic opportunities for coastal Alaskans. This, I think, represents part of a really interesting and terrific paradigm shift and an opportunity for sustainable economic development for coastal communities,” Scheer said Friday by phone.

Venables says the half-million dollar boost will pay for engineering and design work, community engagement, utility work, and other prep to get ready for construction. He says Southeast Conference is planning to help tap into funding from the recently-passed federal infrastructure bill to help make the facility happen.