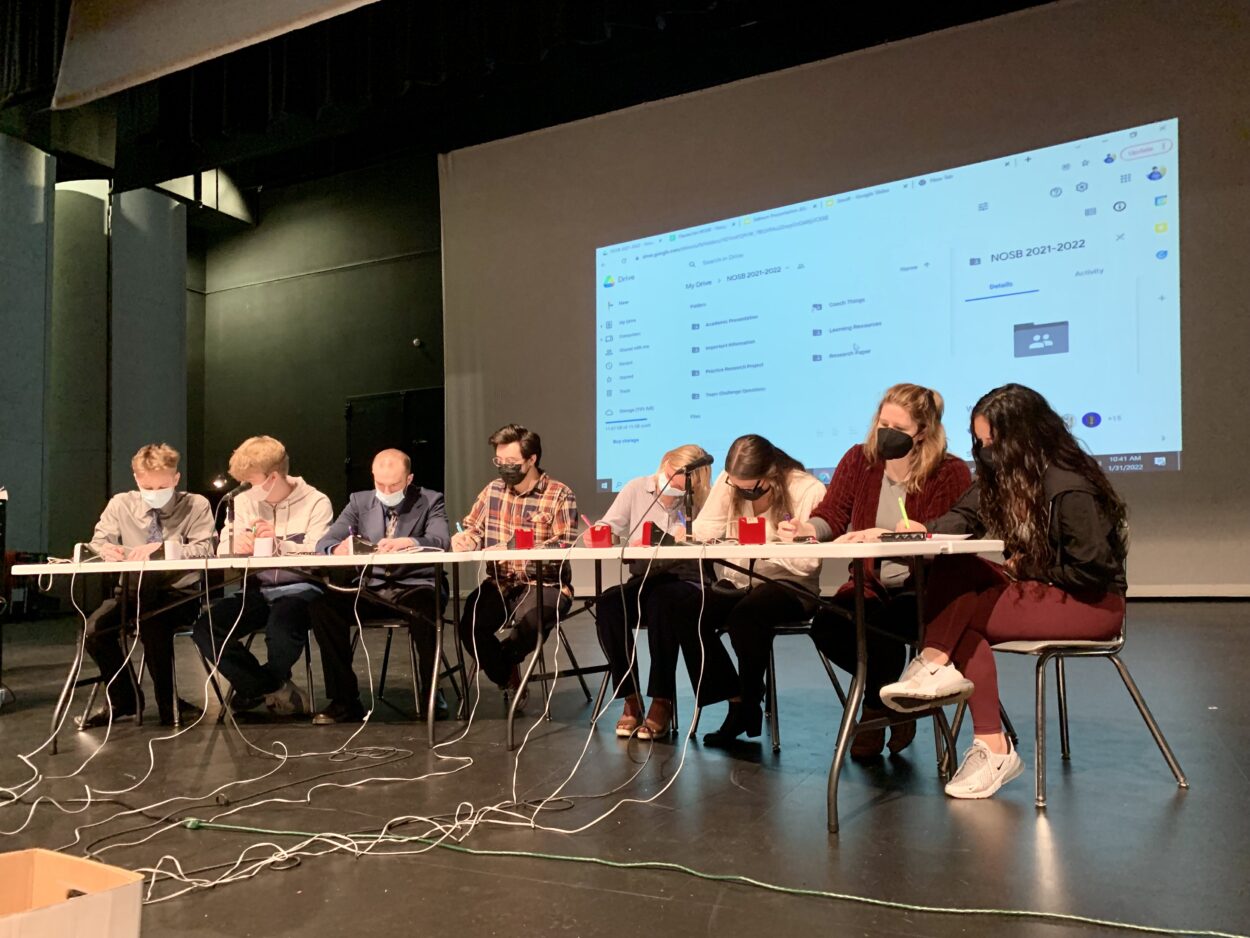 A group of bright young Ketchikan students is off to Seward to compete in the annual Tsunami Bowl. KRBD spent some time with Ketchikan High School’s National Ocean Sciences Bowl teams this week as they prepared for this year’s competition.

Ketchikan High School — better known in town as Kayhi — is sending two teams to this year’s Tsunami Bowl. Kayhi senior Ellie Pickrell is co-captain of the Saber-Toothed Salmon, a team made up mostly of older students.

“Ocean Sciences Bowl is a mixed competition,” Pickrell explained. “We write a 15 page research paper, we do a presentation on it, and then we also do the quizbowl part of it, which is kind of like a Jeopardy!-style game with ocean questions.”

Each year has a theme — this year, it’s “Climate Change: Ocean Science and  Solutions.”

“We each get to pick our own sub-topic underneath that umbrella,” Pickrell said. “So this year, the Salmon are doing ‘Mitigating the Methane Outputs of Cattle Through Feed Additives.'”

You may have heard of this: Methane, the same gas used in natural-gas stoves, is a potent greenhouse gas with 28 times the heat-trapping power of carbon dioxide. Almost 6% of the world’s greenhouse gas emissions come from cattle — as they digest their food, they release methane into the atmosphere through burps and flatulence.

“We talk about how that can be reduced by the integration of a species of seaweed called asparagopsis taxiformis into their diet, and then we talk about how we could implement that locally,” she said. Essentially, if you add a certain type of red seaweed to cattle feed, the cattle are less likely to fart and burp, meaning less methane coming into the atmosphere.

The Saber-Toothed Salmon’s paper argues it’s a twofold opportunity: not only would adding seaweed to cattle feed reduce greenhouse gas emissions, it would also spur demand that could be filled by Alaska’s growing mariculture industry.

The particular type of red seaweed that’s been shown to reduce methane emissions grows in warm temperate and tropical waters — so, not exactly what you’d find in Alaska. But there are other red seaweeds containing similar chemicals that do grow here — the team says they just haven’t been studied enough.

“I knew that from previous research that shellfish were being impacted by … not being able to produce their shells because of the lack of calcium in the water,” Del Mundo said.

The Saber-Toothed Smolts’ other co-captain, junior Izaak Landis, says the team’s research found that farming kelp alongside shellfish can help alleviate the issue.

“I think it was actually my captain Romel here, who was researching these methods of farming clams made by Indigenous people around this area called ‘clam gardens’ and how we can integrate kelp, which takes in carbon dioxide from the water,” Landis said.

Both teams scored high marks on their papers — the Smolts came in third in the state, followed by the Salmon in fourth. Now, they’re off to Alaska SeaLife Center to present their ideas.

“We’re really excited to go to Seward and kind of showcase our abilities and show everyone our really cool topic,” Dyson said.

Volunteer coach Keenan Sanderson, himself a member of the ocean sciences bowl team in high school, says he hopes the competition instills a love of place in his students.

“Generally, if you know more about the surroundings around you, whether it’s about the trees, or the plants, or the fish or the water, or whatever it is, you’ll generally be a more happy person,” he said.

The teams compete in Seward this week for a chance to advance to the national competition. Though the quizbowl rounds are confidential — all of the regional competitions use the same questions — the teams’ presentations will be livestreamed on the Saber-Toothed Salmon’s Facebook page shortly after 11 a.m. Friday. The Salmon are scheduled for roughly 11:20 a.m., and the Smolts are scheduled for roughly 11:45 a.m.