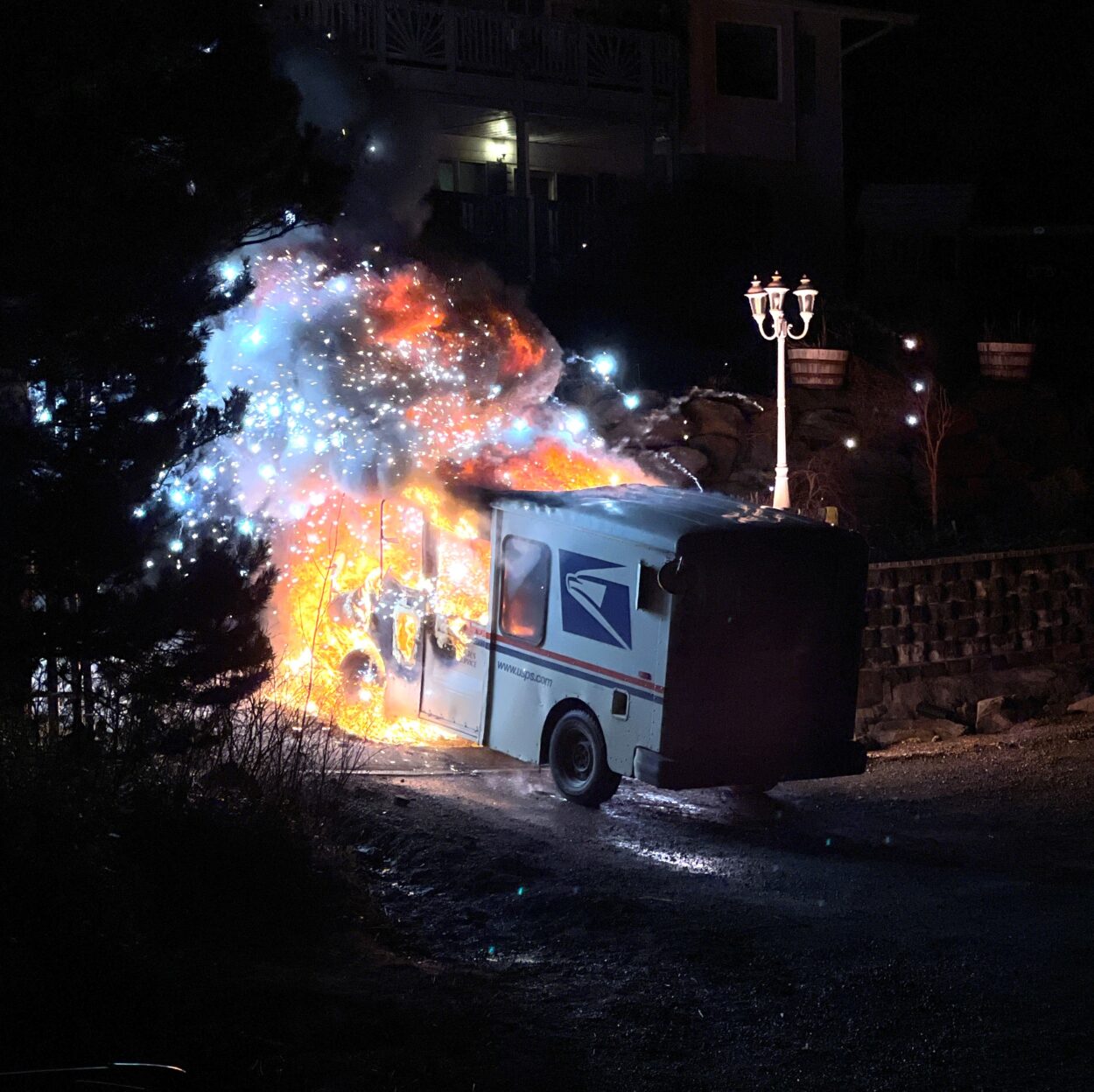 A postal service truck went up in flames in a neighborhood south of Downtown Ketchikan Friday night. There were no injuries, though some mail was lost.

The blue and white mail truck was at the bottom of Mellanie Isner’s driveway when she says her granddaughter ran to the phone and dialed 9-1-1 just after 7:30 p.m.

“So I jumped up and looked out the window and oh, dear — that postal delivery truck was engulfed in flames,” she said by phone Monday. “A huge ball of fire.”

Neighbor Jeff Fitzwater says he heard a loud bang or pop while eating dinner. He stepped out the front door of his Oyster Avenue home and watched.

“It was intense. It was really intense,” Fitzwater said by phone Monday. “It started in the front, it blew out the windshield, it popped the tires. The fire was so intense that it actually burned holes in the sides of the door …  It was quite a ferocious, intense flame.”

Fitzwater, a professional photographer, snapped a few pictures. One captures white sparks and brilliant orange flames engulfing the front of the truck.

The heat was intense enough to scar  the asphalt and even melt a hole in a steel grate over a drainage ditch.

“The fire and police departments came out there very quickly and had two or three trucks there. They got it out pretty pretty quickly,” Fitzwater said.

“The only obstacle we really dealt with during the fire was we had a small — I’m assuming that it was a magnesium fire burning in the driver’s compartment,” he said in a phone interview Monday. “It was maybe the size of a fist. But it was very bright white, and that’s what led me to believe it could be magnesium. And when it got hit with water, it did pop a little bit.”

Rydeen says based on his experience, the burning magnesium, or maybe another flammable metal, was responsible for the fireworks-like sparks seen in Fitzwater’s photo.

A U.S. Postal Service spokesperson, David Boxrud, said in a statement that the fire was under investigation. Rydeen says his investigators chalk the blaze up to an issue with the Northrop Grumman Long Life Vehicle.

“We investigated, and the best we could determine is that it was a mechanical malfunction or failure in the vehicle, in talking to the driver,” Rydeen said.

It’s not the first time one of the U.S. Postal Service’s iconic box trucks has gone up in smoke. A 2020 report from the news organization Vice cited some 400 fires in mail trucks between 2014 and 2020 — about one every five days. The report said there was no discernible pattern to the fires and that the advanced age of the vehicles was thought to play a role.

The postal service spokesperson, Boxrud, declined an interview and did not answer emailed questions about the age of the vehicle involved in Friday’s fire.

In a statement, he said that employee safety is a matter of great importance to the postal service, and that all vehicles used by the USPS adhere to federal safety standards. He said the postal service has implemented mandatory maintenance schedules and procedures to ensure the vehicles are safe to drive.

But what about the mail? Isner says once she was sure the mailman was safe, that was next on her mind as the fire burned.

“One of my first thoughts was, Oh, my goodness, all the mail in there. Oh, dear,” Isner said.

The USPS spokesperson says the fire damaged a “very limited number of mail pieces” and that the affected customers had been notified.