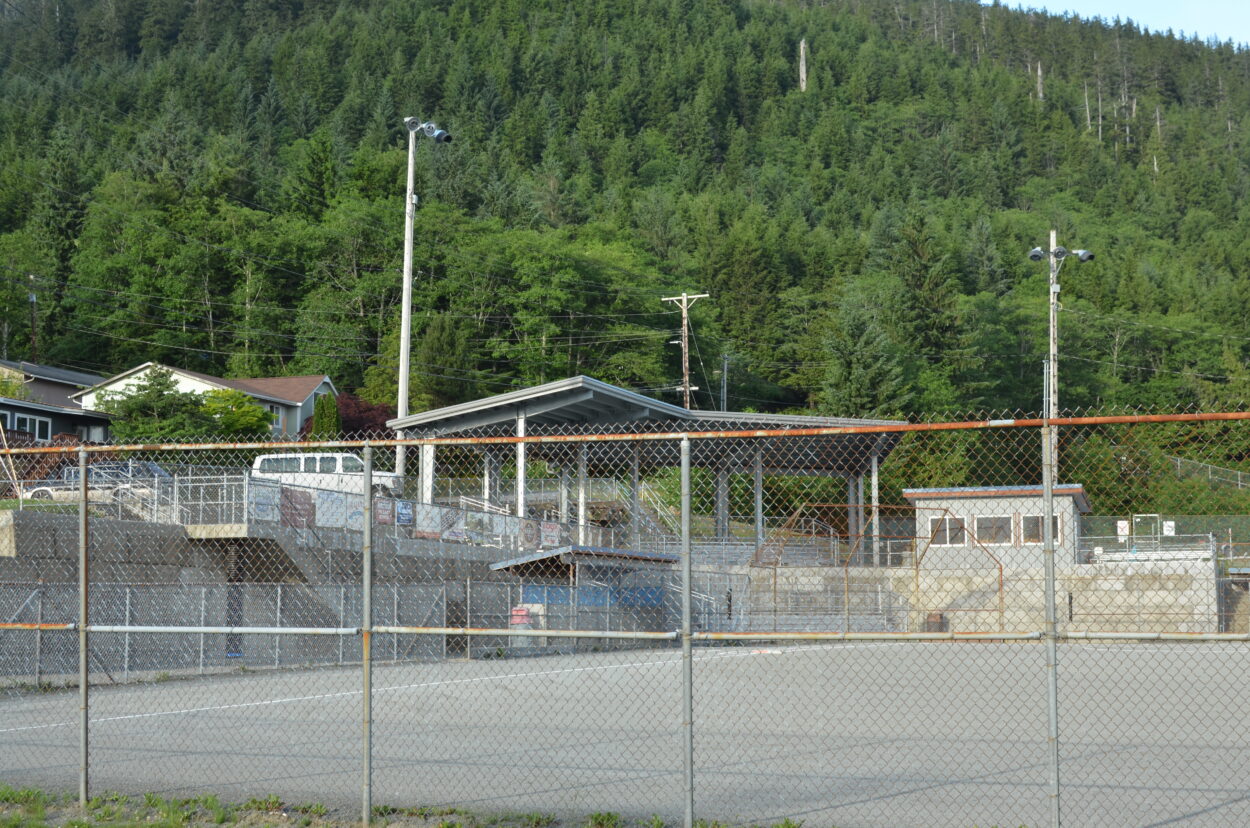 Ketchikan’s Dudley field is shown on June 29, 2021. Dudley Field, Walker Field, and a field outside Houghtaling Elementary School are due for upgrades funded by a voter-approved $6.6 million bond measure. (Eric Stone/KRBD)

Work to upgrade Ketchikan sports fields is progressing with the design phase underway. Ketchikan’s Borough Assembly is slated on Tuesday to take on more than $6 million in debt to finance the projects.

Last October, voters overwhelmingly approved a $6.6 million bond measure to upgrade fields near three Ketchikan schools. In November, the assembly appropriated $500,000 from the general fund to pay for design and preliminary site work at the fields. That money is slated to be reimbursed after bonds are issued.

Borough Public Works Director Morgan Barry says R&M Engineering in Ketchikan is working on designs for the two fields that will see the largest upgrades, including artificial turf.

“We’ve mostly been focused on the surface improvement, the grandstands, those sort of elements at Walker Field. The layout had largely already been determined prior to executing that contract. Dudley Field’s a more … reconstruction of the field, so they’re collecting all the survey data, identifying the soil conditions they’ll be working with, that sort of stuff right now,” Barry said in an interview with KRBD.

Barry says he expects design work will be completed by May and the projects put out to bid shortly afterward. He says it’s difficult to project when actual groundbreaking will take place at any of the sites. Barry says before work can start at Walker Field outside Schoenbar Middle School, a city water main needs to be replaced.

“Their existing raw water main runs through our field. And the idea is that they will replace that ductile iron main with a new 3-foot, six-inch HDPE (high-density polyethylene plastic) main crossing the field. Once that’s in place, the fidelity is extremely high. We have no reason to believe that that will effectively ever fail — whereas the ductile iron, as we’ve seen on Schoenbar Road, has a tendency to come apart. So overall it’s an improvement,” Barry said.

However, Barry says supply chain issues have delayed the water main project. He says some work on the fields will begin in the fall and continue through the winter, weather and supplies permitting.

The assembly is scheduled to hold a public hearing and authorize issuing bonds at its regular meeting on Tuesday.

In other business, the assembly will consider an approximately $50,000 contract for a six-year lease of election equipment.

The borough has been leasing state ballot scanners and tabulation equipment. But the borough clerk’s office says that due to security concerns, the state will no longer allow municipalities to use state equipment.

The clerk recommends leasing five ImageCast Precinct Tabulator units from Dominion Voting Systems.  She says they’re the same models used by the Alaska Division of Elections as well as the City of Ketchikan. The clerk advises using the same equipment for consistency and compatibility. She says a lease is preferred over a purchase because it allows for ongoing support and maintenance of the equipment.

The assembly will also hear an update by the Borough Planning Director on the Borough’s tourism strategy project. The 15-month project began this January with an assessment of current conditions. The goal is to produce a plan for a sustainable tourism industry that balances the needs of visitors, local residents, businesses and the natural environment.

Because of the Presidents’ Day holiday, Ketchikan’s Borough Assembly meets Tuesday rather than Monday at 5:30 p.m. in the White Cliff Building. Members of the public can weigh in at the beginning of the meeting and during public hearings. The full agenda is available at the borough’s website, where the meeting is also live-streamed. It’s also available on local cable channels.