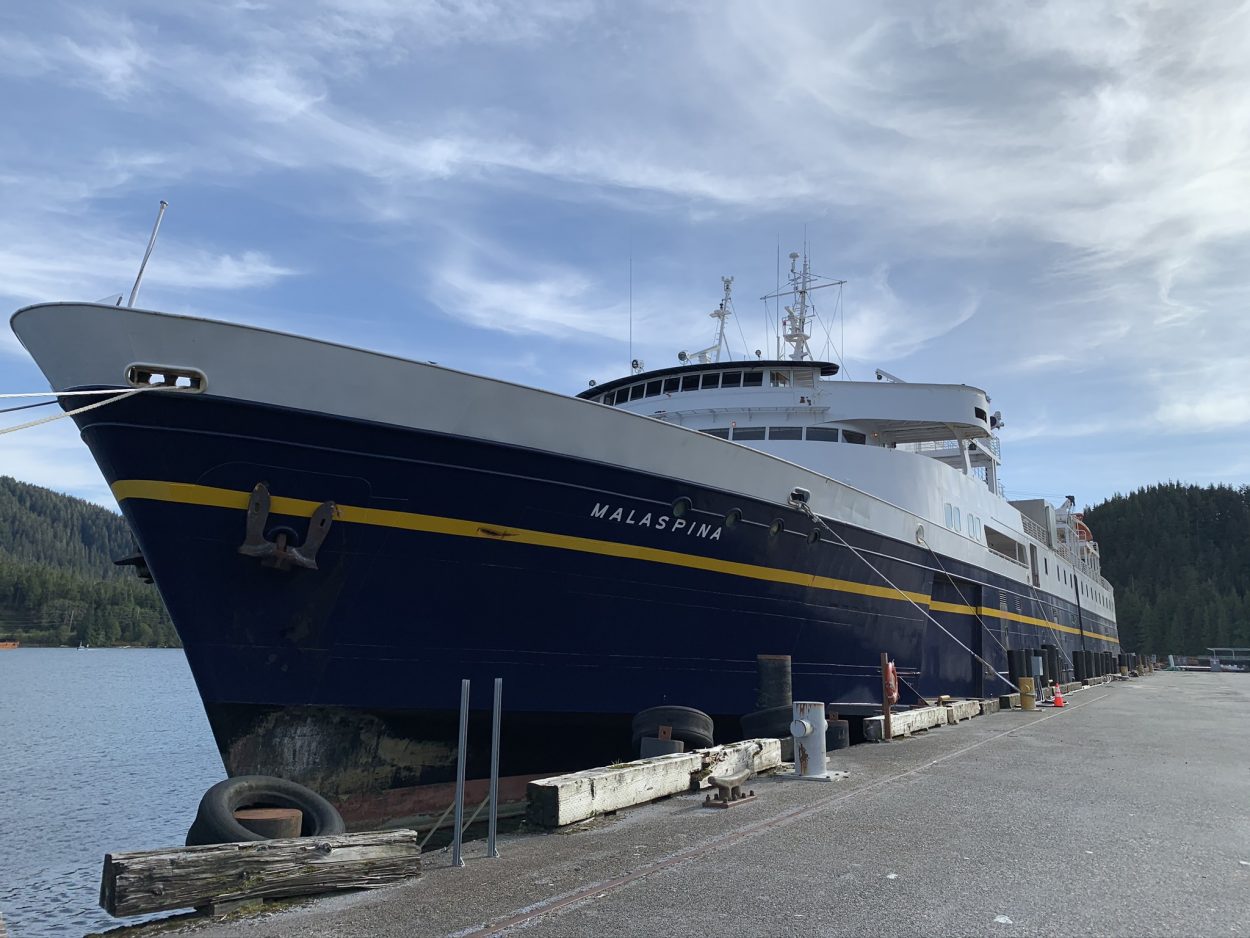 The state ferry Malaspina sits in layup in Ward Cove near Ketchikan on May 10, 2020. It’s been costing the state nearly $75,000 a month to keep it tied up. (Eric Stone/KRBD)

The Dunleavy administration announced Friday that an unnamed U.S. buyer is interested in purchasing one of Alaska’s original mainline state ferries for an undisclosed amount.

It’s the latest twist in the fate of the ferry Malaspina, which hasn’t sailed since December 2019.

Now, the state is asking other interested parties to step forward before March 7. DOT officials say their preference would be for the 59-year-old vessel to remain in Alaska, though that wouldn’t be a requirement.

Last year Gov. Mike Dunleavy offered to give the ship away to the Philippines. But the offer wasn’t accepted due to the amount of work needed to rehab a vessel that had been stripped and suffered storm damage while moored in Ketchikan.

The 450-passenger vessel has been sidelined since the state agency balked at the estimated $16 million in steel work needed to keep the ship seaworthy.

A CoastAlaska investigation last year found that the state is paying nearly $75,000 a month to keep it. That includes insurance costs and mooring fees at a private berth in Ketchikan owned by the Ward Cove Group.

Several interested buyers said last year that their inquiries to purchase the ship had been ignored even as agency officials privately expressed concern over the mounting costs of keeping the idled ship in the fleet. That’s according to interviews and review of several hundred emails released to CoastAlaska in a records request.

Alaska Marine Highway System officials last year told lawmakers they were working with the Environmental Protection Agency to prepare to scuttle the Malaspina in deep water. But a notice posted on a state website says: “Letters of interest that propose scuttling the vessel are not being considered at this time.”

In response to CoastAlaska’s questions, DOT says its priority is finding “what is in the best interest of the state in exchange for the vessel,” DOT spokesperson Shannon McCarthy wrote. “While typically, this means top dollar, there is value in preserving the vessel’s historical value for Alaskans.”

She added: “The ship served as a primary mode of transportation for many communities over five decades the public is rightfully nostalgic for the vessel.”

The Malaspina was built in 1963 and was one of the marine highway’s original three mainline ferries. The Taku was sold for scrap in 2018; the Matanuska is still in service.