Craig celebrates its centennial with a birthday bash featuring stories, photos and a free-throw contest 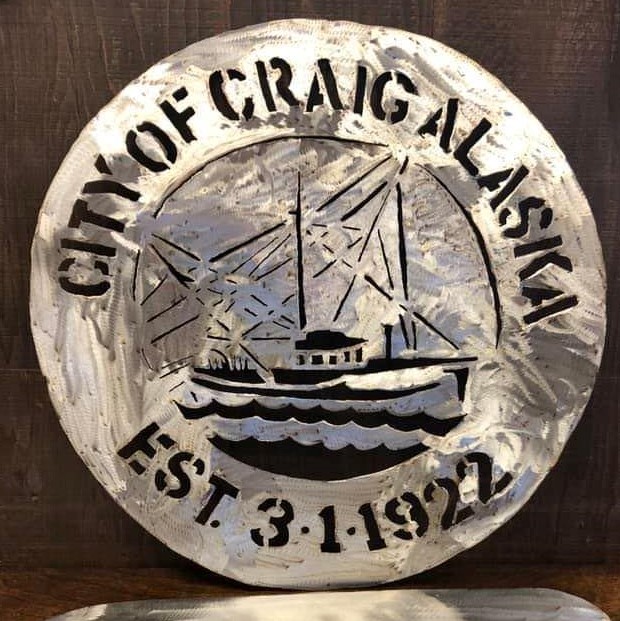 A metal rendition of the City of Craig’s seal designed by Samantha Wilson and cut out by Craig High School welding students. The metal seals will decorate city buildings in Craig. (Courtesy of Victoria Merritt)

The Prince of Wales Island community of Craig is celebrating its 100th birthday tonight. And it’s not a birthday without a birthday party.

The festivities for Craig’s centennial got underway this past weekend. At a local bar on Sunday, City Administrator Brian Templin says he listened as community elders told stories about the history of the community of about 1,200 on Prince of Wales Island’s western shore.

“The word that I kept hearing was change — and not necessarily in a bad way. In the last 100 years, folks who grew up here have seen the community change, and I think mostly they’ve seen it grow and improve,” he said.

It’s growth not just in terms of size or population, “but growing up,” Templin said.

“So, changing from when Craig started as being very isolated, very small, narrow economic focus, and over the last 100 years, Craig has not only grown in size and population, but has become more linked with the rest of the world,” he said.

There are a series of events laid out all week to celebrate a century of Craig history stretching back all the way to its founding on March 1, 1922.

There’s a short film with longtime Craig residents recalling their memories of the early days, and a reading of state legislative proclamations honoring the community.

One of those honors a very special Craig resident — one older than Craig itself.

“Fred Hamilton Sr. —  Fred just turned 101 years old, a lifelong Craig resident and the oldest living Haida in the world, actually,” Templin said. “He’s been a big part of the growth of Craig, and we’re happy to celebrate him as well as Craig’s 100th anniversary.”

Plus: trivia, local dignitaries, and for the basketball fans, a hoops contest. Templin says there’ll be a livestream of the event on the City of Craig Centennial Celebration Facebook page. The event gets going at 6 p.m. A schedule for the event is here.

“We’ve decided that we’re going to count however many three free throws a person could throw in 100 seconds,” Templin said. “One for each year that we’ve been a city.”

The festivities continue through Saturday with one last storytelling event at T.K. ‘s Cafe at the Craig Inn at 7 p.m. There’s even a short fireworks show scheduled for Friday night.

“Fireworks are not just for the Fourth of July anymore,” Templin said.

This year, they’re for the first of March (on the fourth of March).