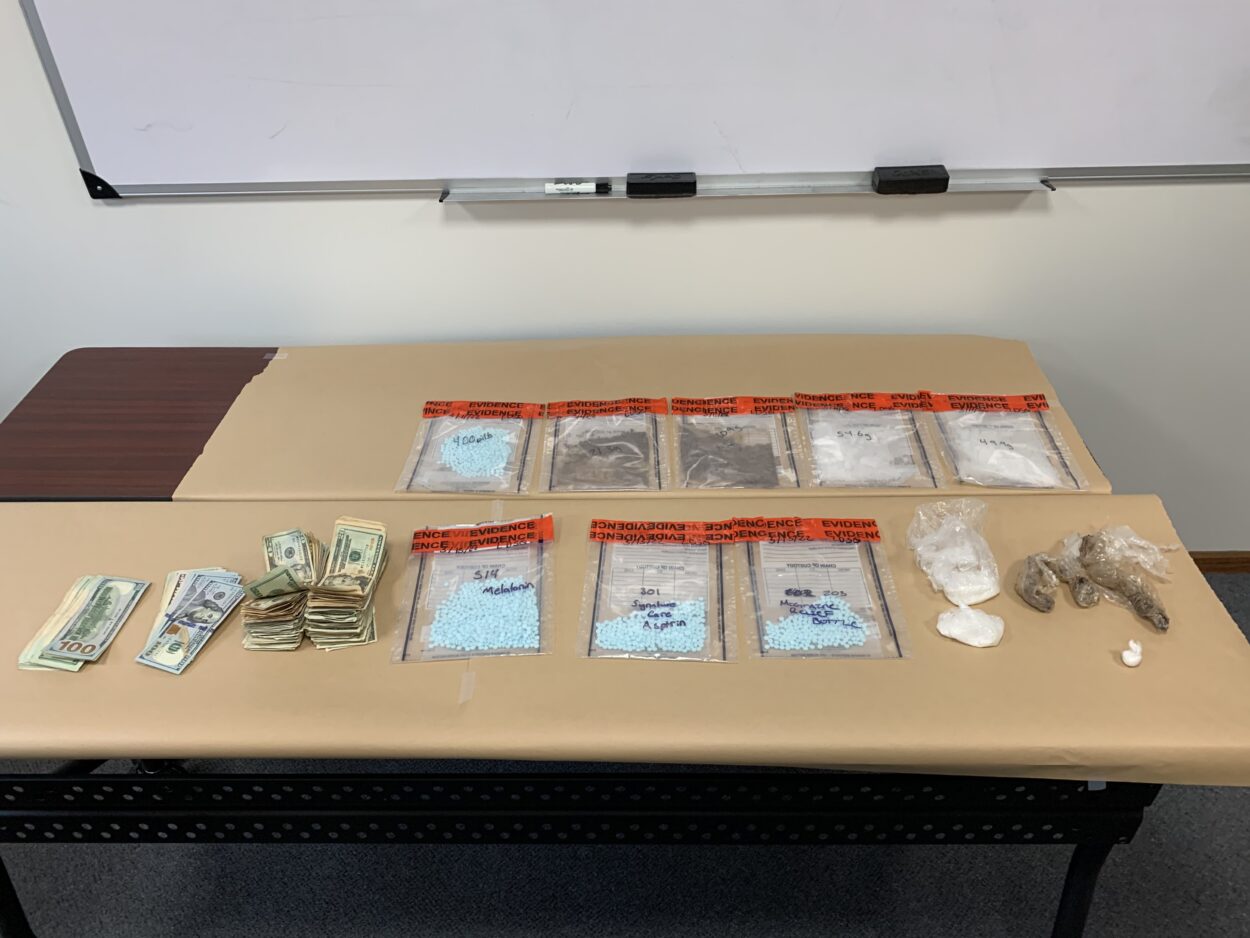 Police laid out seized drugs and cash at a press conference on Tuesday. Five people are facing felony charges connected to two drug busts in the past week. (Eric Stone/KRBD)

Authorities have charged five people with attempting to smuggle drugs from Washington state into Southeast Alaska. Ketchikan police say two separate recent busts in the past week turned up more than 1,400 counterfeit pills thought to contain fentanyl, plus large amounts of heroin and methamphetamine. It’s the latest in a series of drug busts in the southern panhandle.

“Essentially, the people from Washington State were being utilized to transport with their bodies and their luggage, large amounts — I mean, these are large amounts of drugs — to Ketchikan that can be very damaging,” Berntson said at a press briefing on Tuesday.

The synthetic opioid fentanyl is thought to be especially dangerous because even small quantities can lead to fatal overdoses.

He says the recent arrests and drug seizures in Ketchikan are part of an ongoing effort by local police and the Southeast Alaska Cities Against Drugs task force, a collaboration of local police departments and state and federal law enforcement agencies, to clamp down on the movement of drugs into the panhandle.

“You generally have the setup of, there’s some source of supply in Washington State, a person that essentially takes the risk for some incentive to bring them here to a person that then is kind of the next-layer distributor in Ketchikan,” Berntson said.

In the first case, police say 35-year-old Washington state resident Jamie Guiberson was arrested after arriving March 11 at Ketchikan’s airport after police found 400 pills suspected to contain fentanyl, along with heroin and methamphetamine in a search. Police say an investigation found that Guiberson had traveled to deliver the drugs to two Ketchikan residents: 29-year-old William Van Sise and 31-year-old Kendra Bartholomew, who were also arrested. Police also charged Van Sise and Bartholomew with arranging for a separate shipment of meth that was seized at the airport in February.

In the second, police say they found more than 1,000 fentanyl pills plus heroin, meth and powdered fentanyl on the person and in the belongings of 34-year-old Michelle Nelson of Washington state, who arrived from Seattle March 14. Police say the shipment was intended for 37-year-old Ketchikan resident Angelina McDonald. All five suspects are facing felony drug charges. Each was assigned a state-funded attorney in their initial court appearances. The state Public Defender Agency didn’t respond to emails seeking comment on their behalf.

“You don’t have a courier without a responsible party on either end. So, if we can start with the person in Ketchikan who is distributing it in the streets, which we feel like we have done in these two cases, at least, you know, we can start trying to cut the head off the snake a little bit,” Berntson said.

It’s the latest in a series of busts announced by Ketchikan police as authorities seek to take a bite out of the supply of illicit opioids in the region. Last month, police – working with the regional task force – said they’d arrested a man and seized two dozen pills and $29,000 cash from a Creek Street hotel room. The department announced the seizure of nearly 3,000 similar pills and thousands in cash in December. And state troopers charged a woman in February 2021 with smuggling some 200 fake oxycodone pills and a half-pound of heroin into Ketchikan. Police say for now, there’s not evidence that the cases are connected.

KPD Detective Jack Ford says informants are telling him that the seizures have had a measurable effect on the number of fentanyl-laced fake oxycodone pills on the street. He says the price of the small, blue pills stamped “M30” has risen significantly in Ketchikan.

“The most recent street value has been between $80 and $100 a pill. That’s fairly recent. It used to be that they were about $60, so we’re glad to see that the price has gone up a little bit in the past month,” Ford said.

Ford says recent seizures have also helped slow the flow of opioids into smaller communities in the southern panhandle.

“We’ve seen that as a result of some of our more recent successful investigations that the price of these pills on specifically Prince of Wales Island has dramatically increased and the availability has gotten very difficult to find,” Ford said. “We’ve been able to look at these investigations where we’re seizing large quantities of pills that has a very direct impact on the smaller communities.”

While police say the couriers appear to be coming from the Seattle area, Berntson says authorities haven’t identified the source of the pills themselves.