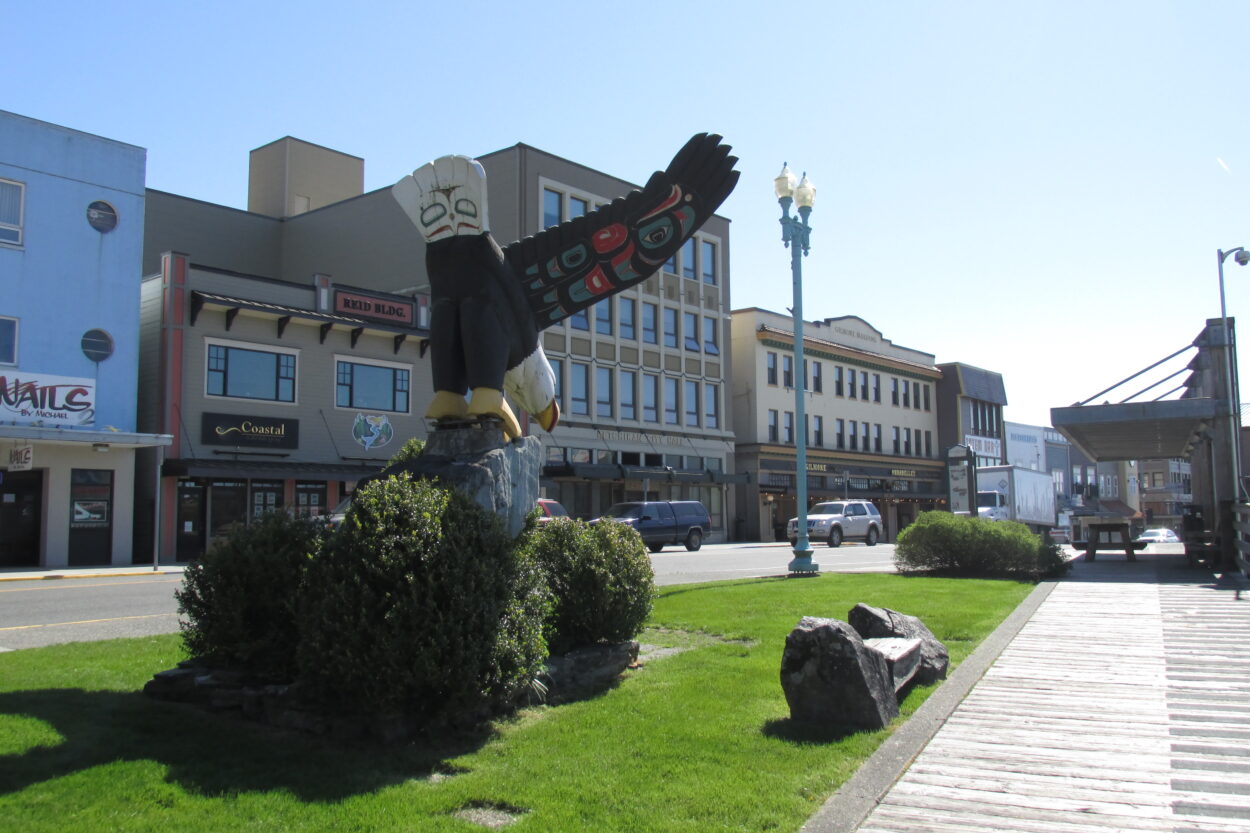 Ketchikan’s City Hall and City Council chambers got new names on Thursday night. Longtime city manager Karl Amylon’s name will be placed on the downtown city administration building, and the council chambers within it will be named after longtime elected official and newspaper co-publisher Lew Williams III.

But a third proposal to name a park home to an iconic piece of Native art after a white man drew criticism at Thursday’s Ketchikan City Council meeting.

The patch of grass across the street from what’s now known as the Karl R. Amylon City Hall doesn’t have an official name. But it’s known in guidebooks — and even on Google Maps — as Eagle Park. The cedar monument “Thundering Wings” by Tlingit master carver Nathan Jackson depicts an eagle taking flight.

“I believe that park represents the Native community in more ways than I think a lot of people understand. It has a history of its own. The eagle represents the land, and the mountain, and I think it would be very disrespectful,” she said. “As much as I think Len deserves a spot, I just think this is a bad call.”

Len is Len Laurance — a longtime promoter of the tourism industry in Ketchikan who died last year.

Laurance was born in Australia and moved to Ketchikan in the mid-20th century. In the 1970s, when a cruise season brought fewer than 70,000 passengers, he famously predicted that one day, Ketchikan’s annual cruise ship visitor numbers would top a million a year. The 2018 cruise ship season proved him right.

A former Ketchikan mayor suggested the city honor the businessman’s contributions to the industry by naming the park overlooking Berth 3 of the city’s cruise ship docks after Laurance.

“It seems a little off to put a white man in there, I’m sorry to say. It feels like a Native thing,” she said.

Mayor Dave Kiffer said he understood the pushback. But he said Laurance deserved a prominent honor.

“Seriously, folks, you are looking at someone who basically envisioned — and through work of his own, helped to create — what’s paying all our rent,” Kiffer said. “And so I would hate to see any sort of, ‘Well, we could we can solve that with a little plaque somewhere.'”

He suggested an alternative.

“Something else that Mr. Laurance was in on at the beginning, 30 odd years ago, pushed very hard for, sat up at this podium and talked to us over and over and over again … was the waterfront promenade,” Kiffer said.

That’s a boardwalk connecting the city’s third and fourth downtown cruise ship docks. And the council seemed to like that idea.

The council voted unanimously to send the proposal back to the city’s naming committee for review.