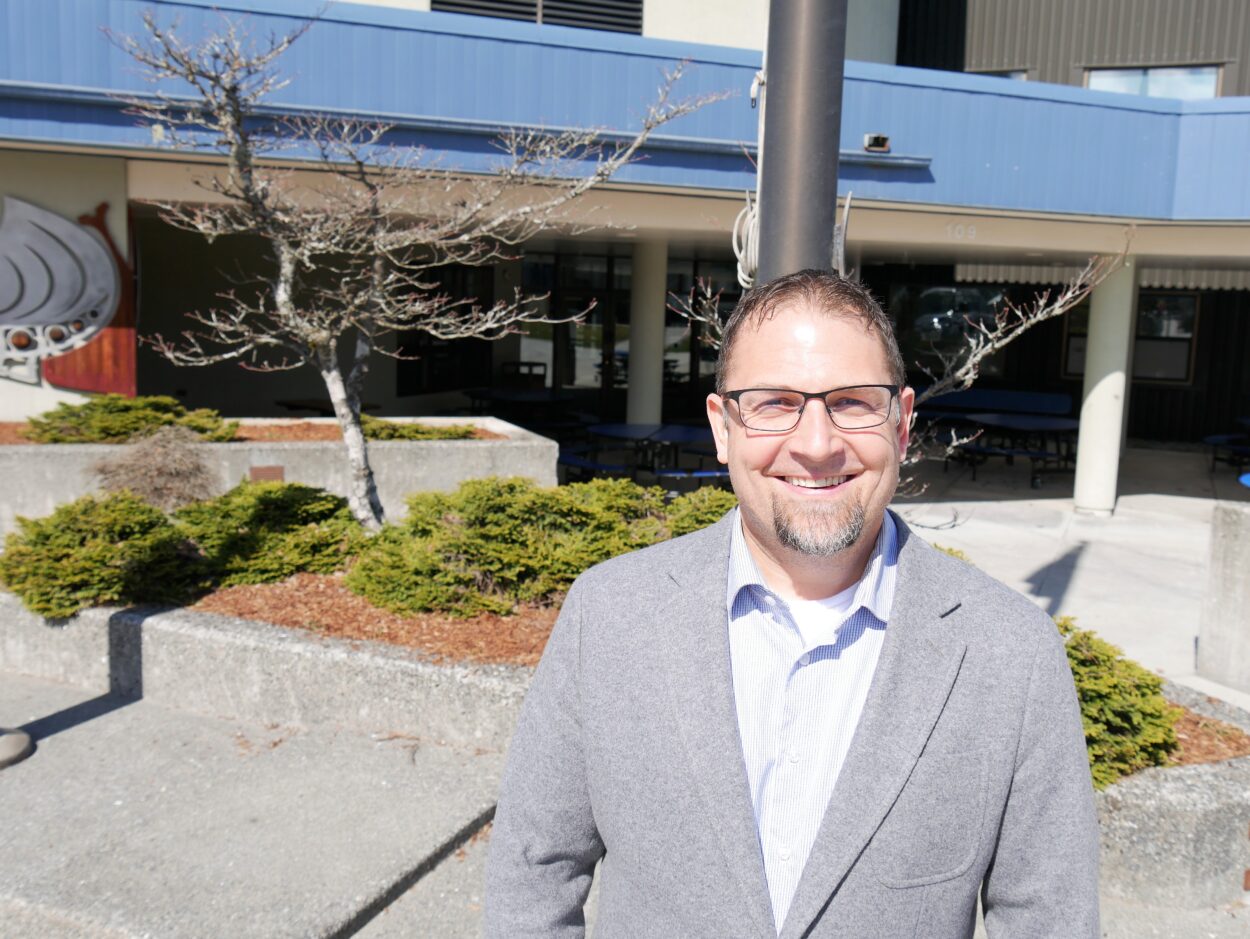 Rick Dormer resigned as Petersburg Middle and High School principal after 13 years on the job. In August, he’ll start work as principal of Ketchikan High School. (Photo by Angela Denning/KFSK)

Petersburg’s long-time secondary principal has resigned and taken a job to run Ketchikan High School. Rick Dormer made the announcement public on Tuesday.

In a letter emailed to students and parents, Dormer wrote that the decision was a very difficult one. In an interview with KFSK, he teared up at times.

Dormer says it’s a professional move for him. He has been the principal of Petersburg’s middle and high schools for 13 years, with a population of around 225 students.

Ketchikan High School has about 550 students and its size will align more with how Dormer was trained. He worked in Portland, Oregon in a school of 2,000 before moving to small town Petersburg. Over the last decade he’s worn a lot of hats as principal of 6th through 12th graders and he’s looking forward to what a larger school can provide.

“We’ll have an assistant principal and, you know, an athletic director is different. They have an administrative assistant so it’s a different structure,” he said. “While I love Petersburg and a small town there’s some things I miss about the structure and the big town type of thing.”

He sees it as moving from one successful school to another, both with supportive communities and good records. Petersburg High School has been ranked best in the state and the middle school number two in the state. Meanwhile, Ketchikan has a 90 percent attendance and 91 percent graduation rate. Dormer says he’ll support what’s already going on there.

“I’m not going to go in and start pushing buttons and flipping switches right away,” he said. “The idea is to watch and absorb and so I’d encourage the next Petersburg principal coming in and soak up the excellence that our students and staff are doing right now.”

Erica Kludt-Painter is Petersburg’s Superintendent. She’s worked with Dormer for 13 years as both his supervisor and colleague when she was principal for the elementary school.

She says he has a good connection with kids and takes time to build those relationships.

“He is a very positive leader. He is upbeat,’ Kludt-Painter said. “I rarely see him, you know, get really down and I think it’s one of his best traits.”

Dormer will work in Petersburg until mid-June and start his new job in August. His wife, Jill Dormer, who works at Petersburg Medical Center, and his son, who will be a sophomore next year will remain in Petersburg to continue work and school.  His says he’ll visit often.

Kludt-Painter says they’ve already posted the job and will create a hiring committee. But she says they are big shoes to fill in a tough job market.

The district has been trying to hire a counselor since January. Kludt-Painter says it’s very difficult right now.

“We’re being hit with the same sort of job challenges that many other districts have been dealing with for years,” Kludt-Painter said. “We are definitely hitting those right now and we’re seeing it in the applicant pool for even some of the positions at our elementary level. We’re certainly seeing a reduced number of applicants.”

As part of the hiring process, the school district plans to send out a survey to get input from parents and families. They want to know the qualities they value most in a principal and priority areas they would like to see addressed in upcoming school years.