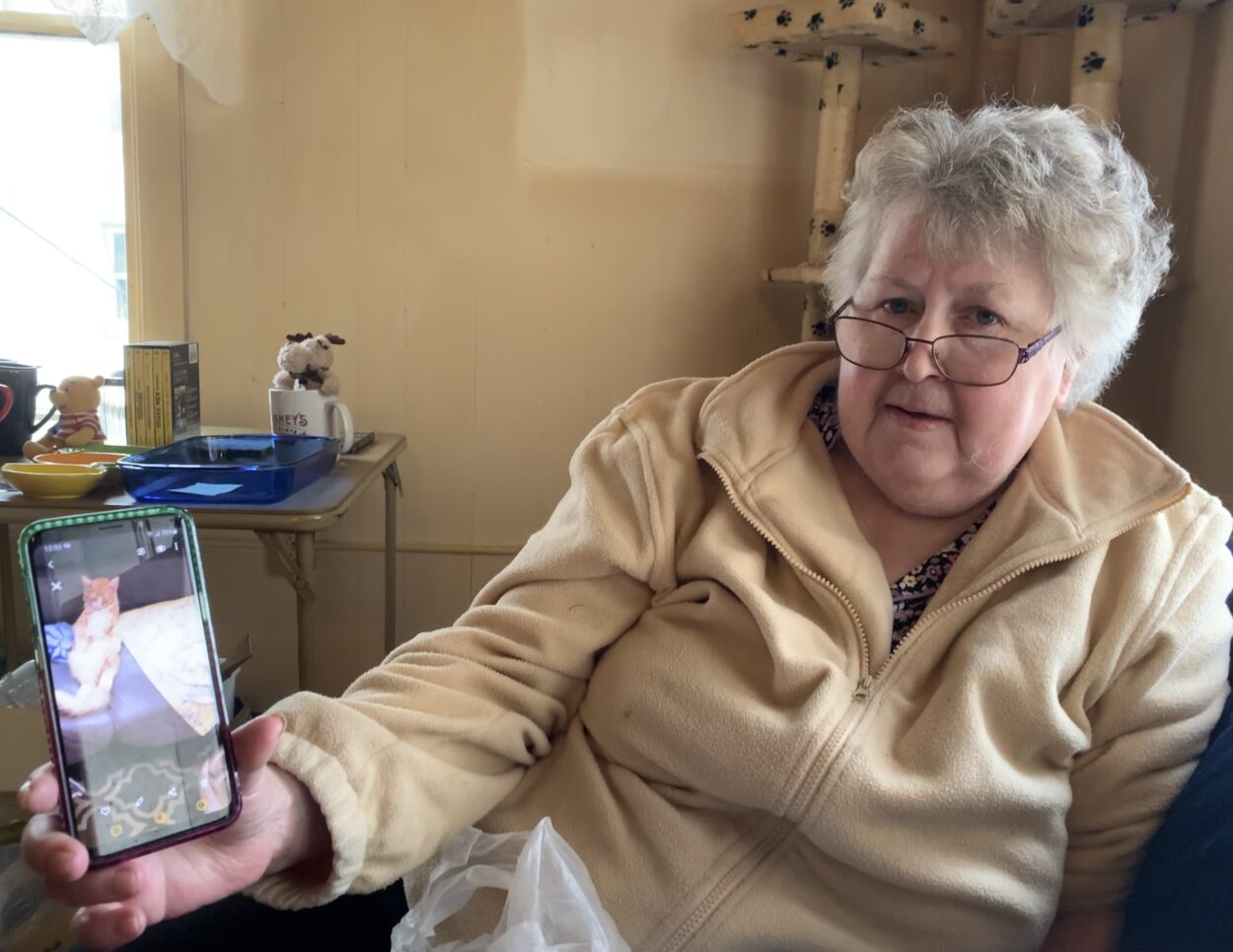 Retiree Edna Glines shows off a photo of her cat, Thumper, at her downtown Ketchikan apartment in March. Glines says she had to give up her beloved pet when she found out her lease wouldn’t be renewed, forcing her to move out of town. (Eric Stone/KRBD)

It can be tough to find housing in Ketchikan, and it’s not getting any easier. Officials in Ketchikan are pursuing a wide variety of ideas to address the housing crisis ranging from short-term rental permitting to new roads and residential subdivisions.

Housing is in short supply in Ketchikan. Retired school district janitor Edna Glines learned last month that she would lose her apartment when she received a letter from her landlord that her lease wouldn’t be renewed.

“I’ve been here 26 years. This was my home,” Glines told KRBD last month.

Glines says she paid $650 a month for the one-bedroom downtown.

She’s not alone. Six other households in Glines’ Main Street apartment building were also forced to relocate when they received similar notices. Renters at a triplex just up the street were left scrambling when their landlord gave them a month to vacate after declining to issue new leases on their low-cost apartments.

Glines says she can’t afford to stay in town.

Officials in Ketchikan are taking notice of the housing crunch. Ketchikan’s city government, which issues building and utility permits, is looking at ways to speed and lower the cost of developing new housing. And Ketchikan’s Borough Assembly, which controls land use and zoning, is eyeing other ways to increase the number of homes and apartments available in the community.

Borough Planning Director Richard Harney told the assembly at an April 18 work session that affordable housing in Ketchikan is disappearing.

“As these properties are becoming valuable, that means the price goes up. It also means that demand is going up for them and the supply goes down. That’s where we’re at. We went from having a housing problem to a housing crisis in just a matter of a few years,” Harney said.

Harney ticked through a few ideas to address the housing shortfall. One short-term proposal is to regulate Airbnbs and other short-term rentals, which Harney says have exploded in recent years. He says there were 160 vacation rentals listed in 2020, up 71% from the year before. That means fewer long-term rentals are available for housing.

Harney says some vacation rentals don’t have business licenses or pay hotel or sales taxes. He says the borough could require short-term rentals to be registered and permitted.

He said another short-term option to increase the housing supply would be to temporarily loosen restrictions on RVs.

But short-term tweaks won’t solve the larger issue, officials said – to ease the crunch in the long term, there’ll need to be more housing on the market. Assistant Borough Manager Cynna Gubatayao suggested investing in infrastructure to encourage housing developments. She says about $4.2 million towards extending roads could open up about 60 currently inaccessible home sites in the Mud Bight area, though there’s no guarantee the homes there could be affordable housing.

“If we can figure out a way to get a road into that subdivision, then those parcels will start being developed. It will all be market rate,” Gubatayao said. “The current owners may choose to sell their parcels to someone else and allow them to develop. They may choose to develop. But we’ll start some activity out there.”

Gubatayao says a more expensive option is the Mountain Point subdivision, which has about 80 sites and would cost about $10 million to develop. She says they’re looking for funding opportunities, including grants from the Alaska Legislature.

Down the road, Gubatayao says the borough could create a subsidized subdivision for workforce housing.

“If it’s possible, it might be the best way. Because then we can figure out how to target these first-time home buyers, the people who are working families — the ones that we know right now can’t get housing,” Gubatayao said.

The borough assembly voted unanimously to set aside $7 million from reserves to establish a Housing Capital Fund to develop subdivisions, housing and roads. The assembly also voted to pursue a $50,000 grant from the federal Denali Commission for planning.

One final option suggested by Vice Mayor AJ Pierce is to simply sell borough land. She says the borough is allowed to sell property at 85 percent of the assessed value, and suggested offering lots at that price with buyers selected in a lottery.

“It’s been discussed a lot over the years.  I think that it’s time that we have an opportunity to work with staff and take a look at the feasibility of that,” Pierce said.

The assembly voted unanimously to look into the idea at a future meeting.