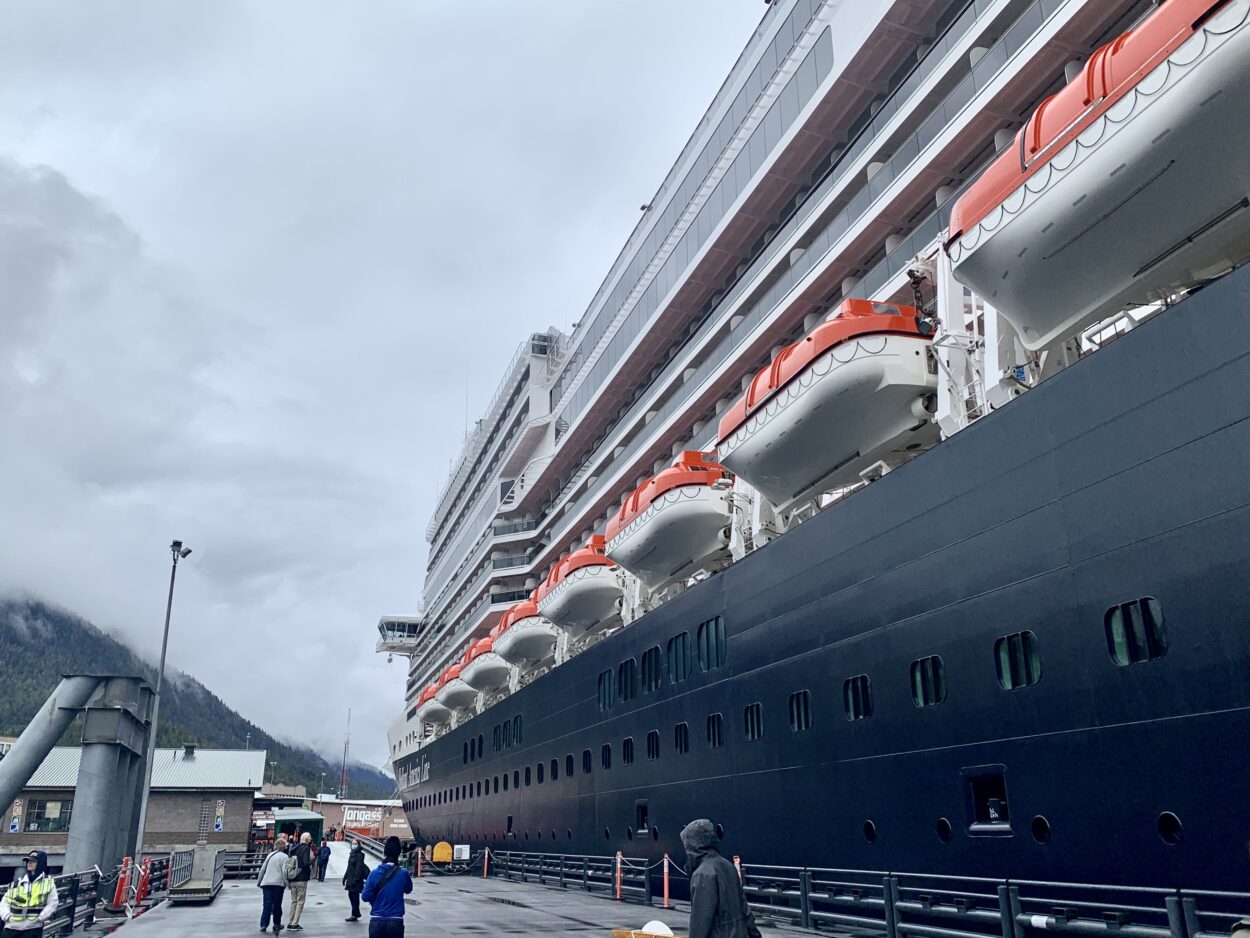 Passengers disembark from the Holland America ship Koningsdam in Ketchikan during one of the ship’s first voyages to Alaska in May 2022. (Eric Stone/KRBD)

After two years with little to no traffic, the Alaska cruise industry is back in force this summer. While passenger numbers aren’t expected to break 2019 records, cruise lines have scheduled more stops at Southeast ports more than ever — and that brings new challenges.

“Welcome to Ketchikan. On behalf of the community, we’re happy to have you back. We’re looking forward to many successful visits,” Flora said.

The Koningsdam is the largest Holland America ship to visit Alaska. It’s nearly 1000 feet long and carries 2,800 passengers and 1,000 crew. On this voyage, it’s about 60% full. It’s one of six ships visiting Ketchikan for the first time this year — including three smaller boats from boutique lines and two megaships. Ketchikan Visitors Bureau President and CEO Patti Mackey says it’s part of a welcome trend.

Though a similar number of ships are sailing the Inside Passage this summer compared to 2019, port calls are up significantly — more than 10% in both Ketchikan and Juneau.

Part of the growth in port calls can be attributed to the cruise season in Alaska getting longer — ships are now sailing the Inside Passage well into mid-October.

New facilities are also playing a role. Ketchikan opened two new berths last year. Port calls in Sitka are up by 40% over 2019 following the expansion of a privately-owned cruise terminal, and with larger ships coming, passenger volumes could double. Mackey says continued infrastructure growth is critical.

“For more ships to come to Alaska, we need to have places for them to go,” Mackey said.

But with growth comes growing pains. Mackey says operators all over the region are struggling to staff up.

“Two things that I hear most from all businesses, whether it’s a tour company or retailer, a hotel — hiring and housing,” Mackey said. “That’s the challenge for the workforce.”

“The cruise industry is an entirely unreliable partner for us to have the level of overreliance that we do for our economy,” Hart said.

Non-cruise travel boomed in 2021 amid a roughly 90% drop in cruise tourism.

Hart  says she’d like to see Juneau limit the number of cruise visitors and focus on growing independent travel.

“One or two cruise ships a day that provide life and vibrancy and help to support local businesses, but don’t overrun everything to the point where it’s an unattractive destination for anyone else,” Hart said.

Juneau’s city tourism manager, Alexandra Pierce, says local officials are working with the cruise industry on ways to limit congestion after a task force identified 50 ideas to improve the visitor industry in the Capital City. And she says Juneau’s marketing agency has focused all of its ad money on attracting independent travelers. Pierce says Juneau is diversifying in other ways, too.

“We are taking steps to get funding to upgrade and expand our convention center with the hope of attracting more convention visitors, conference visitors, and that’s certainly supportive — during the winter months especially,” Pierce said.

Ketchikan’s visitors bureau has also focused much of its marketing efforts on independent travelers. And there are some efforts to limit tourism’s impact on day-to-day life for residents. The visitors bureau launched a Tourism Best Management Practices program modeled after a similar effort in Juneau. The program outlines best practices for shore tour operators and serves as a clearinghouse for complaints.

Beyond efforts in individual communities, Pierce says Southeast Alaska port towns need to have a conversation about what they want the future to look like.

“That’s something that we’ll need to work with the rest of the communities in this region to kind of help balance growth and help balance some of those impacts,” she said.