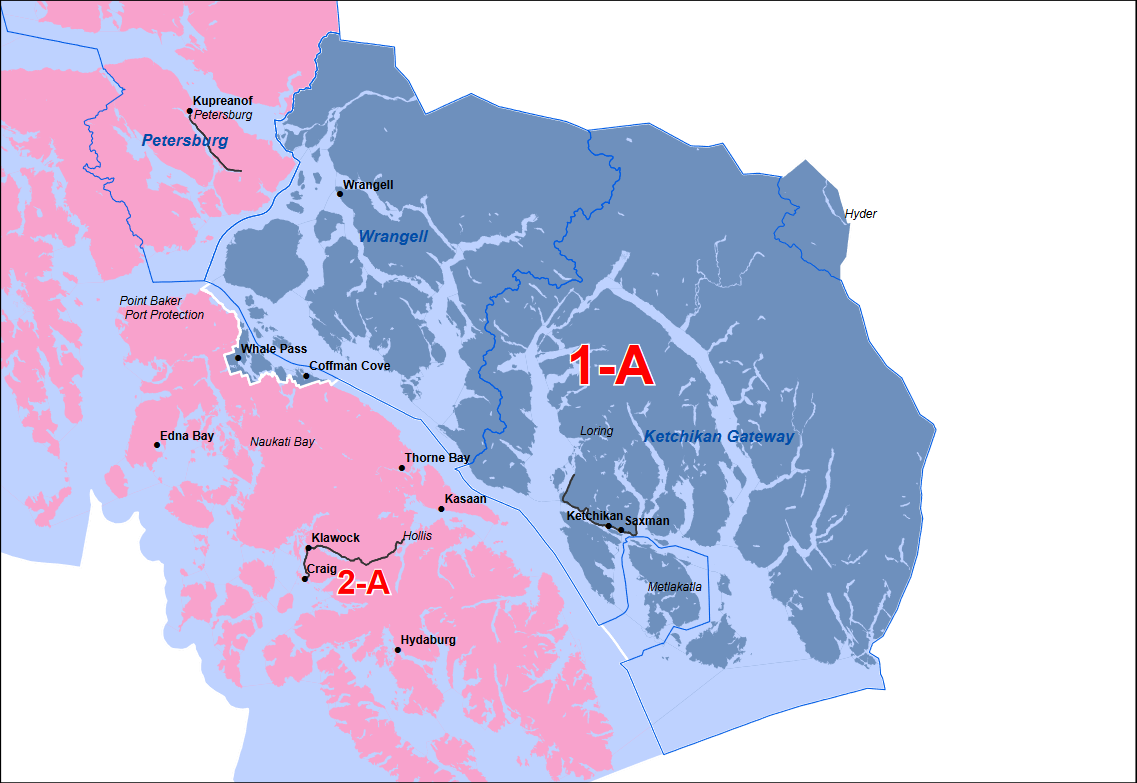 House District 1 is shown in blue. (Alaska Redistricting Board)

Two people have filed to challenge Rep. Dan Ortiz in this year’s race for a seat representing the southern panhandle in the state House of Representatives. Ortiz, a Ketchikan independent, is seeking a fifth term in Juneau.

Three candidates have filed to run for the seat representing the newly-redrawn District One, which includes Ketchikan, Wrangell, Saxman, Metlakatla, Whale Pass, Coffman Cove and Hyder.

Ketchikan Gateway Borough Assembly Member Jeremy Bynum filed to run as a Republican. He says he’d like to increase state education funding and ensure the Alaska Marine Highway System is stable and independent of political interference.

“The state has a lot of issues that are facing it, and they’re not short term issues, they’re long term issues. And we need to have a continuation of leadership that has vision,” Bynum told KRBD.

Bynum is the acting electric division manager for Ketchikan Public Utilities and says he hopes to help the region double down on its abundant hydropower. He says his background in energy helps him stand out from Ortiz.

He says he’d work to develop relationships with others in the House, but Bynum otherwise declined to offer specifics on how he’d leverage Southeast’s renewable energy as a legislator.

KRBD also asked each candidate whether they believe the 2020 presidential election was stolen. Bynum said he believes that there were “anomalies” brought about by pandemic-related rule changes, like the Alaska Supreme Court’s decision to suspend the requirement that a witness sign an absentee ballot. He says those changes created uncertainty in the results of the presidential election, but he stops short of questioning the ultimate result.

“I don’t think that the presidential election was stolen — I mean, that would require a vast conspiracy beyond, I think, what’s capable. I do believe, however, though, that the systems that we have had in place historically were changed, you know, and they changed rapidly,” he said.

Another Ortiz challenger is questioning the 2020 results. Wrangell-based cargo pilot Shevaun Meggitt says she can’t say for sure whether the election was stolen.

The U.S. Supreme Court rejected challenges to the results of the 2020 election and subsequent audits in some states have failed to turn up proof of widespread fraud.

Meggitt is running for the seat as a nonpartisan. In addition to tightening Alaska’s voting laws, Meggitt says her first priority would be to pass what she calls a “patient’s bill of rights.”

“If a doctor says hey, I want to use ivermectin, — they talked it (over) with the patient, the patient said, let’s give it a try — the doctor should be able to do that,” she said.

Meggitt says she’d also like to ensure that Permanent Fund dividends follow a formula laid out in state law. The state hasn’t paid out dividends in line with the formula since it passed a 2018 law that draws from the Permanent Fund for state services. It’s been unable to agree on a replacement formula and has instead set dividends in each year’s budget.

“We need a long-term, sustainable fiscal plan that will allow us to continue to issue a PFD, but at the same time, pay for essential services — and hopefully, without any significant new added taxes. That’s the goal,” Ortiz said.

The retired schoolteacher says his experience in the Legislature and his status as a nonpartisan independent makes him a good fit to represent Ketchikan, Wrangell, Metlakatla, Saxman and Hyder. Though he has caucused with a bipartisan coalition in recent years, Ortiz says he sees eye-to-eye on just about every issue with his counterpart in the state’s upper house, Republican Sen. Bert Stedman of Sitka.

“I am fiscally conservative. But I recognize as well that, you know, it’s important to maintain essential service,” Ortiz said.

Ortiz says he’s seen no evidence that the 2020 election was stolen.

With only three candidates in the running, all are set to advance past the top-four, pick-one primary this summer. They’ll face off in the ranked choice general election in November.