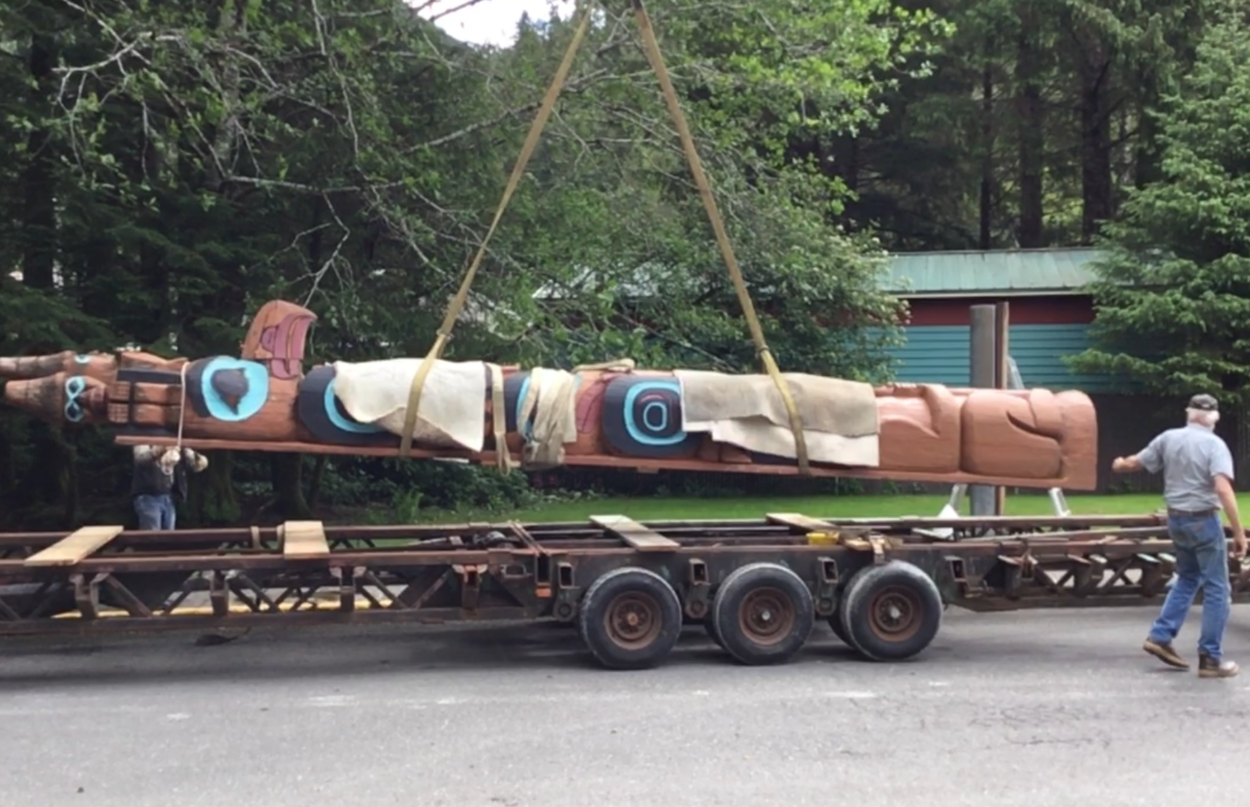 The James and Lillian Leask Memorial totem pole is moved to its new home at the Totem Heritage Center on Tuesday. The pole was carved by Hydaburg master carver Warren Peele. (Photo by Jim Luther)

A totem pole carved as a Ketchikan man’s 50th anniversary gift to his wife found a new place to stand when it was moved from a family home on Tuesday.

Now, it’s raised again in its spot at the Totem Heritage Center, honoring the wishes of the woman who received it decades ago.

Many years of memories are carved into the James and Lillian Leask memorial totem pole.

Gold is often associated with a couple’s 50th wedding anniversary. But, years ago, Don Newman found something worth even more to his wife, Millie Leask Newman.

As Millie’s anniversary gift, he commissioned a Hydaburg master carver to create a totem pole for his wife. It tops out at about 24 feet tall, said his son, also Don Newman.

The younger Newman said it was dedicated to his maternal grandparents, James and Lillian Leask. The couple built the family home in downtown Ketchikan on Inman Street in 1917, according to the Tongass Historical Museum.

And after Millie’s pole was finished, she and Don raised it at that same home, on Oct. 22, 2000. There was a potlatch to celebrate.

Millie Leask Newman died in November. Newman said the family house is now being sold. But he explained his mother didn’t want that for the pole.

So, Newman said she requested it be given to the city of Ketchikan, her hometown, when she died.

“Well, you know, she didn’t want it sold,” Newman said. “And none of us really live in Ketchikan anymore, the kids and her children. And it just seemed the right thing to do. She was pretty excited about it.

Newman said that having the pole in a place where it would have more life meant a lot to his mother.

“I thought it was a nice gesture by her,” he said.

And so, honoring Millie’s wishes and with the house up for sale, the pole was moved on Tuesday.

“Yeah, I didn’t realize it was going to (be moved), but of course Ketchikan is a small town, so all my buddies and family were taking pictures and sending them to me,” Newman said. “And now it’s back up by the Heritage Center where it belongs.”

“And it looks beautiful there,” he said. “I just got a picture from a friend of mine, sitting in its new home and it’s gorgeous. They were pretty amazing people and I think this gift will be something that they could have a little bit of a legacy in Ketchikan for quite a few years to come, I would think.”

Editor’s note: This story has been updated to clarify that Don Newman Sr. purchased the pole from a Hydaburg master carver and commissioned him to paint it.