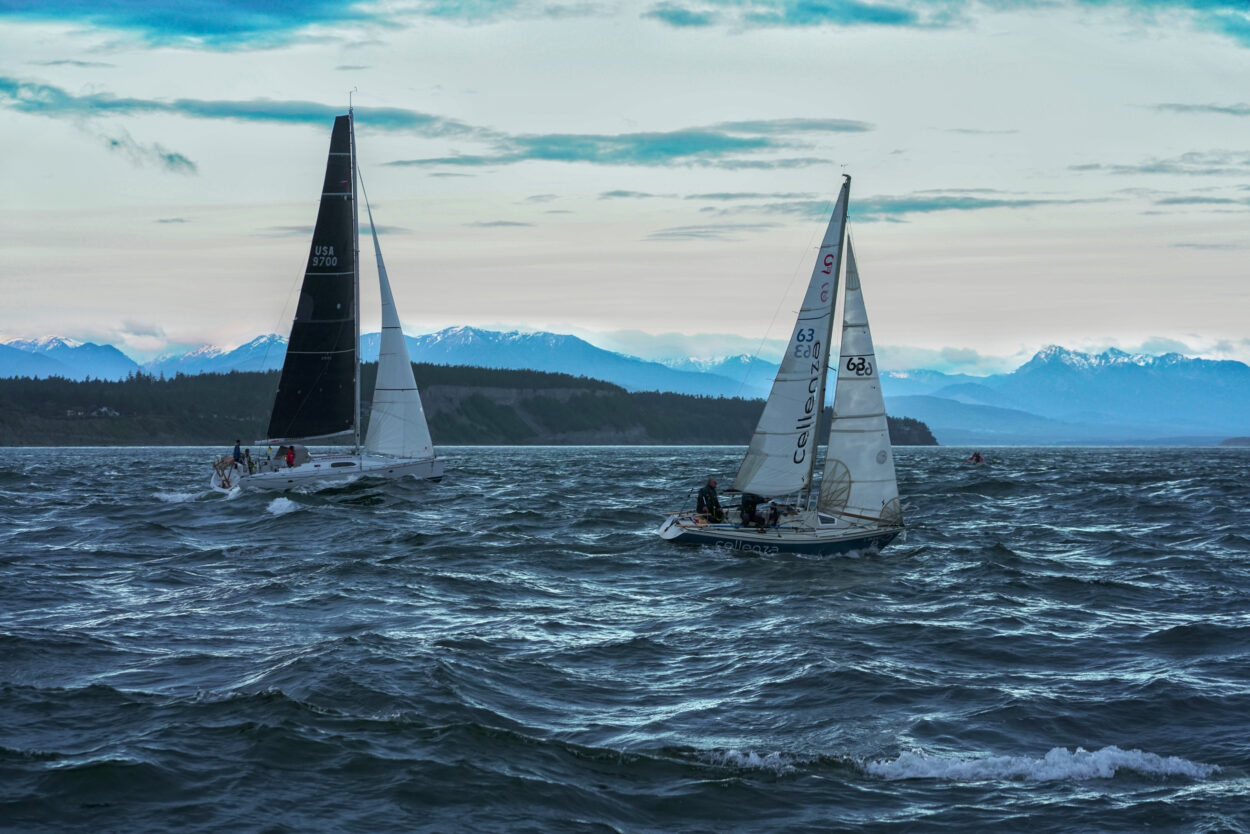 Boats sail in rough weather near the start of the 2022 Race to Alaska. (Photo by Liv von Oelreich, courtesy of Northwest Maritime Center)

Rowboats, kayaks and racing sailboats cast off in Port Townsend, Washington Monday for the official start of the Race to Alaska. The unpowered boat race stretches 750 miles to Ketchikan.

It started off at 5 a.m. Monday with a qualifying leg from Port Townsend to Victoria B.C. The 40-mile “proving ground” course is intended to ensure the competitors are prepared to tackle a self-supported journey up the west coast of Canada.

Racers typically have 36 hours to complete the leg, but this year, the deadline was extended by a day because of weather conditions near the start that organizers describe as “between seasick and dangerous.”

Despite the foul weather, first into Victoria Harbor was Pure and Wild. It’s a three-man crew on a Riptide 44-foot monohull sailboat featuring a member of the most recent Race to Alaska winning team and a two-time Olympic medalist.

Teams Pestou and Ruf Duck, both on multihull sailboats, followed behind Pure and Wild to round out the top three.

But not all fared so well. Organizers announced Monday morning that three smaller boats had capsized — two sailing dinghies and a sailing canoe — and a larger 32-foot catamaran lost its mast in the rough conditions. All competitors were reported safe, according to race organizers.

Pure and Wild’s promising start on the proving ground doesn’t earn them any prize or advantage on the next leg, aside from bragging rights. Racers that make it through are scheduled to start their 710-mile journey to Ketchikan at noon Pacific Time on Thursday in Victoria.

From there, racers have just one waypoint they must reach in Bella Bella, B.C. before crossing the finish line at Ketchikan’s Thomas Basin. Unlike previous years, teams are not required to sail through the Seymour Narrows on the east side of Vancouver Island — some pre-approved competitors will be allowed to sail west of the island on the open Pacific Ocean.

It’s the first Race to Alaska since 2019. And while the course options are a little different, the prize remains the same: $10,000 for first place, and for second place, a set of steak knives.