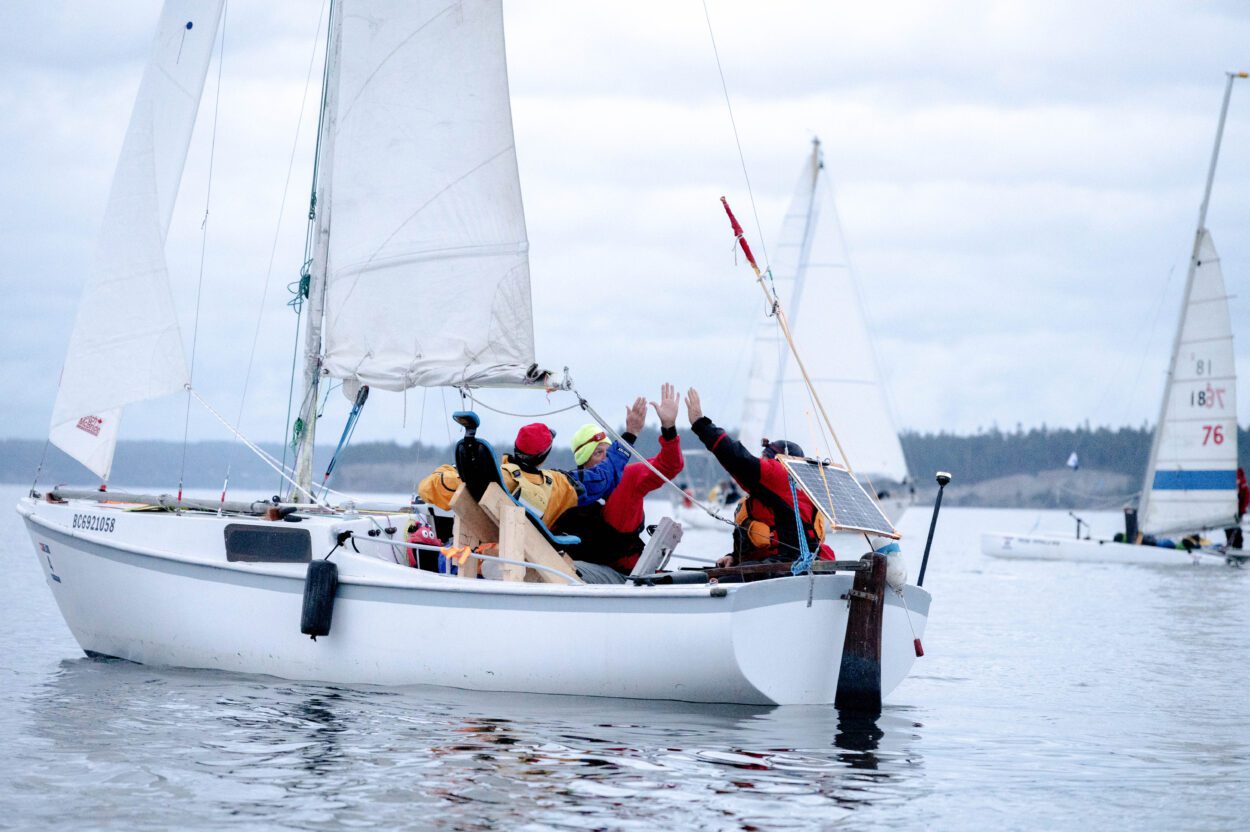 Team Fire Escape, pictured high-fiving in this undated photo, was the last team to make it into Victoria during the first leg of the Race to Alaska. The heart of the race, a 700-plus-mile leg to Ketchikan, starts Thursday. (Photo courtesy of Rebecca Ross via Northwest Maritime Center)

Boaters in the Race to Alaska start the second and final leg of their journey to Ketchikan on Thursday.

The first 40-mile leg from Port Townsend, Washington to Victoria, British Columbia was an eventful one for racers that dared to brave high winds and heavy seas. Four people were plucked from the water by the Coast Guard and Race to Alaska safety boats after three boats capsized and another lost its mast on Monday. Seven of the 46 racers dropped out on the first day, organizers said.

Jake Beattie is executive director of the Northwest Maritime Center, which puts on the race. He says historically large tides combined with high winds to roil the Strait of Juan De Fuca.

“The morning of the Race to Alaska, we had huge winds —  30 knots — against the biggest currents of the last seven years. And so the wind and seas build to a state that the Coast Guard even called some of the worst sea states they’ve seen in their careers. So we had seas up to 12 feet, and wind and weather events that were just epic,” Beattie said.

Beattie says racing was largely suspended on Tuesday, with just one team allowed to depart with the approval of race organizers and the Coast Guard. But by Wednesday, Beattie says conditions had improved dramatically, with calm winds and one-foot seas. At least 34 racers made it through to Victoria, according to results on the race’s website.

Beattie says the so-called “proving ground” leg lived up to its name.

“Teams that have made it successfully through our vetting process and all the way to Victoria are pretty battle-hardened at this point. So of course, we’re concerned for their safety all the way to Ketchikan but have a greater confidence that they will make it all the way because of what they’ve been through to this point,” he said.

And now, the field is set for the second, 700-plus mile leg to Ketchikan. That starts at noon Thursday in Victoria with what Beattie calls a “Le Mans” start with the teams gathered above the docks.

“At noon we’ll blow the horn, and all the teams will run down, jump on their boats, untie, and then, because Victoria has a rule that there is no sailing inside the Inner Harbor, all the teams have to human-power themselves out to the clear air and clear water beyond the point of no sailing,” Beattie said. “It is the most hilarious sort of clumsy chaos you’ve ever seen as these teams pedal, paddle and row themselves off the dock into the rest of the Race to Alaska.”

From there, some pre-approved teams have the option to sail in the open Pacific Ocean on the west side of Vancouver Island. The remainder will negotiate the narrow inlets and shifty winds of the island’s east passage. After that, racers have just one waypoint they must reach in Bella Bella, B.C. before crossing the finish line in Ketchikan.