Celebration returned to Juneau last week. Here’s what some attendees had to say about the in-person gathering 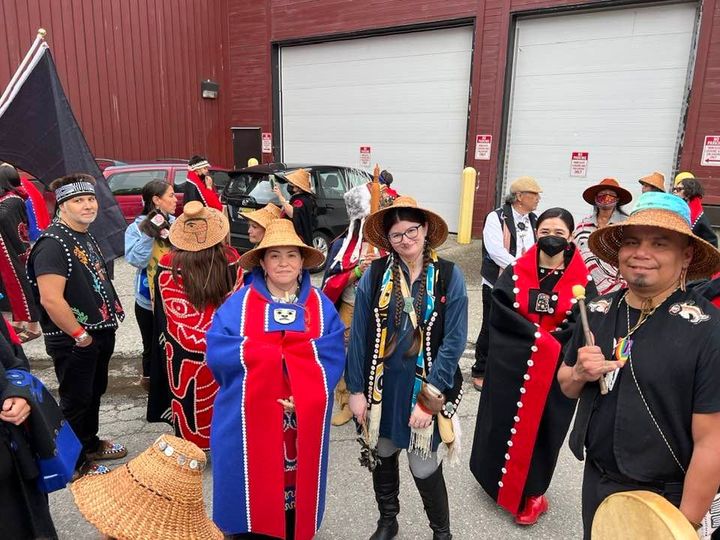 Celebration, the every-other-year gathering of Tlingit, Haida and Tsimshian people in Juneau, wrapped up last week. Alaska Native people from all over Southeast Alaska made their way to Juneau for three days of dancing, art and cultural expression.

Celebration returned to form this year, kicking off with the traditional canoe landing in Juneau. Haida dancer Sandy Edwardson says she spotted a Haida celebrity in one of the canoes: Ketchikan master weaver and culture bearer Delores Churchill.

“It was just awe-inspiring to see all the young folks and the elders,” Edwardson said.

Edwardson danced with the Juneau-based Woosh.ji.een dance group at Celebration. Edwardson said she and her family have attended the biennial event for more than a decade.

This year’s was the first in-person Celebration since 2018, and Edwardson said she was glad to see and celebrate the cultures of the Tlingit, Haida and Tsimshian peoples from all over Southeast Alaska.

“Celebration is just a time for all of us to get together and literally celebrate each other’s cultures,” Edwardson said.

Ben Young of Hydaburg also performed with a Haida dance group, Xantsii Naay and alumni. He also took part in the canoe landing.

It was his second time attending the gathering. He said when he moved back to Alaska from Indianapolis, he used Celebration as a way to reconnect.

He said face-to-face interaction is important for sharing culture, especially after the COVID-19 pandemic transitioned many events to virtual forums.

“We value our connections and our social connections, and affirming each other’s identities, showcasing the artwork that was done, the language that was learned, the songs and dances that were practiced, as well as the accomplishments of our youth,” Young said. “That was very important to be done in person.”

Young says he appreciates how much effort is put into making Celebration happen. That goes for the organizers at Sealaska Heritage Institute as much as the people who came out and support the participants.

“I commend everyone that helped the dance groups on the dance group’s trip, per diem, whatever it took in order to really showcase and celebrate our culture and tradition,” Young said.

Sean Guthrie graduated from Ketchikan High School last month. He couldn’t make it to Juneau for Celebration, but his art did. His woven hat won third place in the youth art contest.

“It was pretty, it was really exciting,  it put an instant smile on my face as soon as I heard Sean Guthrie, and it was from Ketchikan,” Guthrie said.

He said he had been wanting to enter something into the contest for three years. His submission took him three months.

“It’s like a black type of background canvas, with red for the spider web design,” he said.

And Guthrie wasn’t the only Ketchikan winner in the juried art show: Christina Weber took third in the seaweed contest. Weber says she’s excited about the win. Janice Jackson won best of the sewing and skin and fur divisions. And Kristall Bullock earned an honorable mention in the youth contest for her entry “Transformed.”