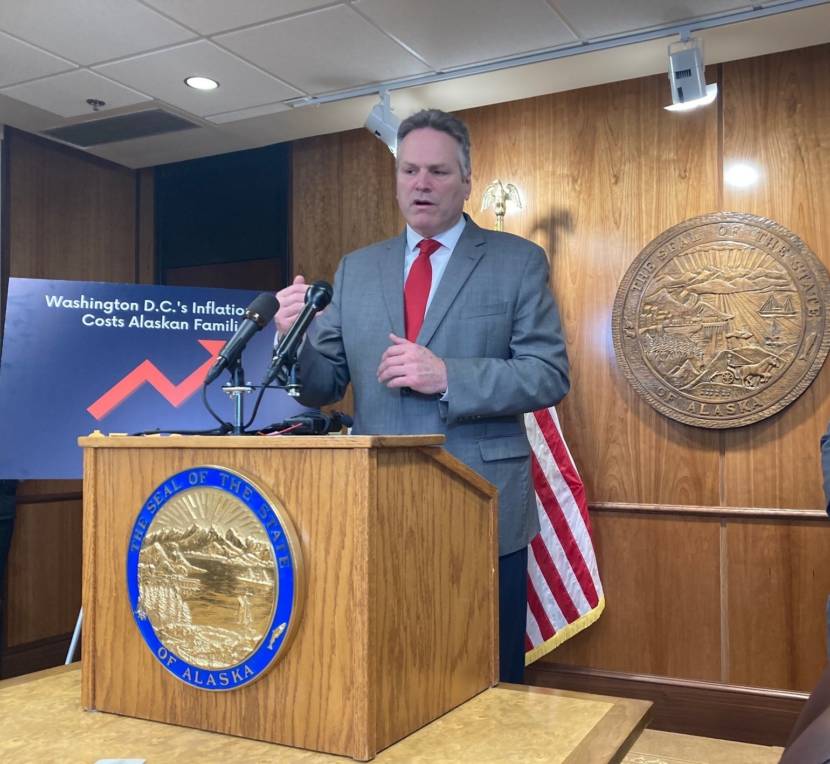 Gov. Mike Dunleavy talks about the state government’s updated revenue forecast, which projects an additional $3.6 billion more than the December forecast on Tuesday, March 15, 2022, in the Capitol in Juneau. (Photo by Andrew Kitchenman/KTOO and Alaska Public Media)

Gov. Mike Dunleavy says he plans to decide soon whether to sign a bill that would provide state recognition for Alaska’s 229 federally recognized tribes.

“We’re in the process of making a decision, and we’ll have that answer next week,” Dunleavy said in an interview on Friday.

The bill passed the state House and Senate last month.

The legislation is a priority for Native leaders in the state. It would acknowledge Alaska tribes’ “unique role in the state’s past, present, and future,” though it would not change the way the state engages with them. But Dunleavy was noncommittal when asked whether he thought the state should recognize Alaska’s tribes.

Advocates for the tribal recognition bill say the measure would allow for continuity between governors’ administrations and allow tribes to make longer-term plans with state officials. Tribal leaders, including Gloria Burns of Ketchikan and Marina Anderson of Kasaan, are pursuing a similar ballot initiative that may go before voters this fall if the bill is not signed into law.

Dunleavy’s comments came in an interview with KRBD’s Raegan Miller on Friday during a stop in Ketchikan. We’ll have more from the interview with Dunleavy next week.

Correction: This story has been updated to reflect that the tribal recognition bill would not change the way the state engages with tribes. The bill would instead simply acknowledge tribes’ role in the state’s past, present and future.